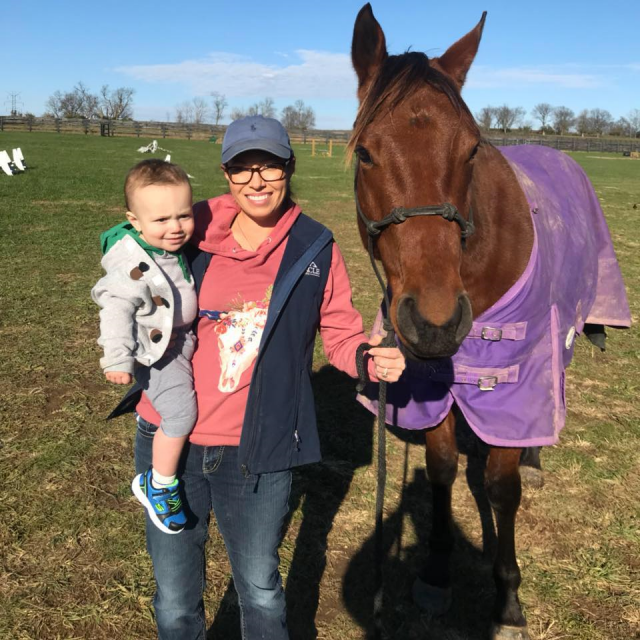 “What are the facts? Why would you not take a chance on a horse that has proven he can win, already broke and riding, and has the look… not to mention his $50,000 sale price as a two-year-old. Someone obviously saw some promise in this horse at some point!”

For 673 accepted trainers, the journey to the Retired Racehorse Project‘s 2019 Thoroughbred Makeover has begun! Over the next nine months, three of those trainers will blog their journeys, including their triumphs and their heartbreaks, successes and failures, for Horse Nation readers. Today, meet blogger Casey French. 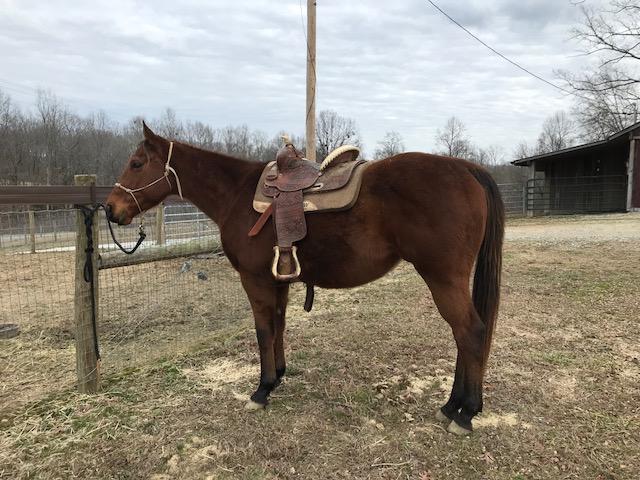 All photos courtesy of Casey French

As a young youth rider, I showed in AQHA judged events, barrel racing, and AHSA shows, but as a teenager I became increasingly involved with high school rodeo. At that point I knew that barrel racing was what I ultimately wanted to pursue. Unfortunately, at the same time, my youth horses were nearing the end of their careers. This is when I was blessed to find a tiny little Thoroughbred mare named Dorothy’s Secret. Immediately, we were an overnight success! As her jockey, we were the Louisiana High School Rodeo State Barrel Racing Champions and we also captured the aggregate title in our first year of competition together. She also qualified us twice to the High School Rodeo National Finals. From that point on we were awarded a scholarship to McNeese State University to compete at the college level, where she was a winner as well.

I was offered an internship during my senior year of college with Boyd gaming at Delta Downs race track and casino. I worked in the racing office, but of course, I found my way to the backside quickly. I wanted to be around the horses! I was fortunate enough to have the opportunity to learn from several successful Quarter Horse racing trainers. Upon my graduation, I purchased a promising barrel racing futurity horse from renowned trainer Cody Bauserman. After a few failed attempts at taking a young horse to competitions on my own, I was invited to come and intern for Cody and trainer Stephanie Duke. I accepted that invitation openly and I feel that my time there is where I learned the most about the barrel racing futurity industry, breeding, and sales.

Since then, I have mainly trained for myself and family, but I also periodically train for the public. I have a personal blog called The Betty Blog and a Facebook group for people seeking advice, with the concept of “no barrel racer left behind,” called The Betty Squad 1.0. It is increasingly growing, and the camaraderie that has formed in the group is nothing less than remarkable! 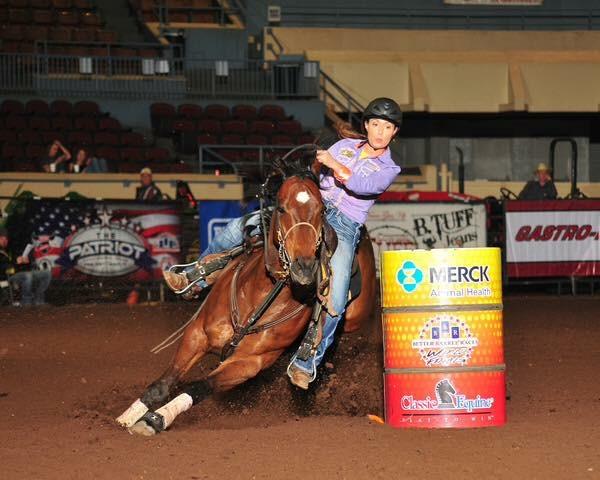 A few years ago, I saw some girls from my area competing at local barrel races with Thoroughbreds they had purchased for the Retired Racehorse Project’s Thoroughbred Makeover. I loved watching their journeys and it really made me excited about trying a Thoroughbred myself. It brought back so many good memories of my time with Dorothy — not to mention, some of these horses were showing some talent. From that point on, I knew that trying one of my own was going to happen. I thought if I ever come across the right one, and the time was right, I would give it a shot!

A few years went by until this became a reality. In October of 2018 when I purchased Awesome Choice, aka “Alvie”, I wasn’t in the market for another horse. But I had a friend Brittany Bennett that would not give up on pushing me to get a Thoroughbred — she was relentless, and within a few days she delivered almost everything on my list.

I had asked her to find a mare, a sprinter that “looked” like a quarter horse and stood on the shorter side. I wanted another Dorothy’s Secret, something with a nice sloping hip, strong shoulder, and low set hocks. Awesome Choice fit most of those categories… only thing was that he was a he, and not a she! But with a single photo and short video, it didn’t take long for me to convince myself that he was worth the gamble. 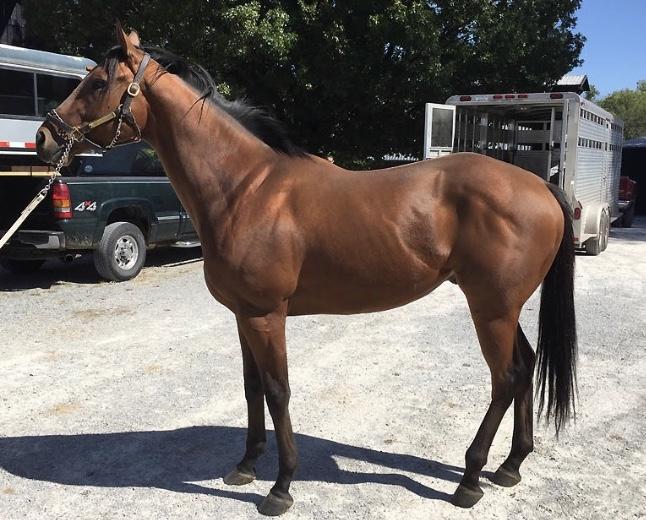 Awesome Choice is a 2014 Florida-bred (Versatile Thoroughbreds LLC, Micheal Crowe & Judy Crowe) bay gelding by Awesome Of Course, out of Courtly Choice — Doneraile Court. He had two outs and was a winner at five furlongs for lifetime earnings of $19,200. He was retired from racing with a sesamoid fracture and was adopted into the Second Stride program. I purchased him from Amy Lent, where he spent over a year off healing from injury. I really wish I could say that my brain was stacked with Thoroughbred pedigree knowledge and that helped in making the decision, but that’s not the case! I chose this horse strictly based off conformation and what I would look for in a performance horse alone.

When shopping for a barrel horse quick speed is coveted. You want a horse that can accelerate and decelerate very quickly, which is why I was looking for a sprinter, and why quarter horses are a popular choice for this discipline.

I know you guys are probably wondering… why would you go with a Thoroughbred after everything you just said? And my answer is this: for the past nine years I have been in search of my next super horse, and that horse has yet to be found. I honestly believe the reason is because the barrel racing prospect market is quite expensive — and for good reason. It costs money to raise a quality prospect; I understand it and I can’t argue it. It’s the just the same when breeding for anything that is specific to a certain discipline.

However, I haven’t been able to justify investing the kind of money I would need to with no guarantee — even more so now that I am a new mother! Not to mention it can also be a numbers game: so you might not be just investing in one prospect, but quite a few just to end up with “the one.” I’ve purchased quite a few hopefuls over the years and just to be frank, I am scraping from the bottom of the barrel.

So I thought to myself, what are the facts? We know Thoroughbreds can make barrel horses — I of all people should know this.   Why would you not take a chance on a horse that has proven he can win, already broke and riding, and has the look… not to mention his $50,000 sale price as a two-year-old. Someone obviously saw some promise in this horse at some point!

In my opinion, so far this has probably been one of my smarter purchases. He may not make it as a barrel horse — that’s to be determined. But still, I am going to give him my best shot. And even if he doesn’t turn out to be my next super horse, based on the time I have spent with him so far (which I cannot wait to share with you all soon)… I know that he will be exactly what SOMEONE out there is looking for! 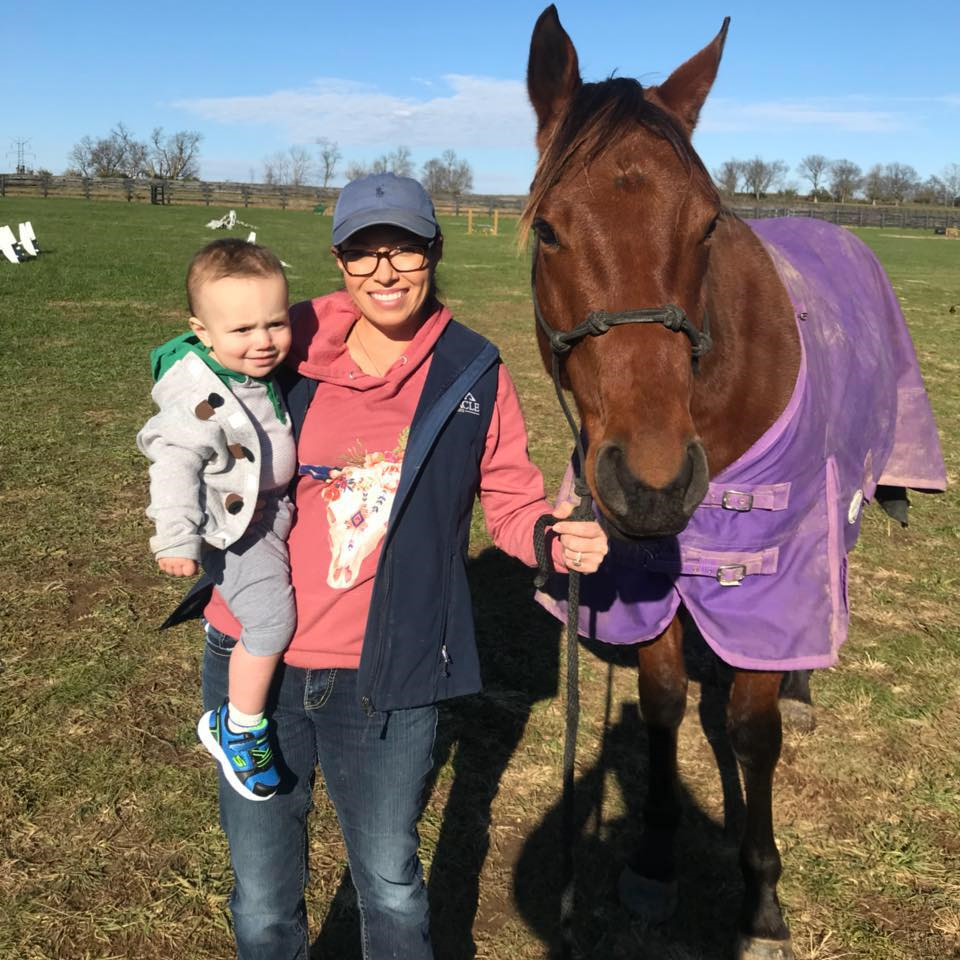