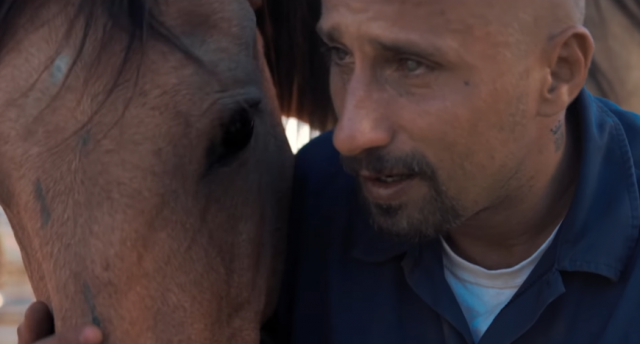 Catch the trailer plus a behind-the-scenes sneak peek of this upcoming release!

2018 brought us a slew of  high quality horse movies. From the thrilling, often dangerous adventures of the riders crossing the rugged Mongolian steppe in the documentary All the Wild Horses to the heart-breaking tale of a boy and a horse attempting to escape an inevitably grim fate in Lean on Pete, these films captured the many parallels that can be found between the equine world and our own.

In 2019 a new movie will explore wild horses and their ability to heal the human psyche.  The film The Mustang, brought to us by executive producer Robert Redford, centers around Roman, an inmate with a violent past. While in prison, he is selected for a social rehabilitation program that involves gentling wild horses. When he finds himself  paired with a particularly difficult horse, the challenge of training it forces him to take a closer look at himself.

The Mustang opens in theaters on March 15. Here’s a behind-the-scenes peek look at the film with Redford and director Laure de Clermont-Tonnerre. Redford also speaks about his work with Return to Freedom.