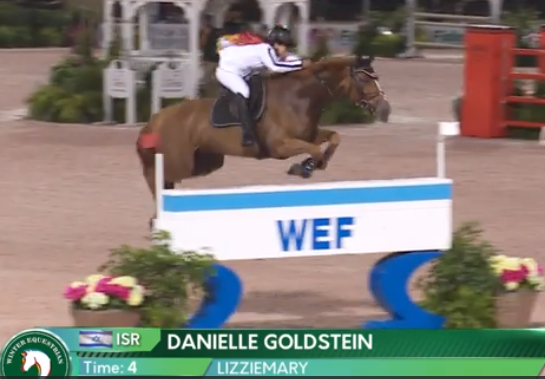 We all know Danielle Goldstein for her trademark feathered locks and love of yoga pants, but her partnership with her spicy red-headed mare Lizziemary is even more special. For the second year in a row, this duo captured the win in the same CSI5* Grand Prix this past weekend.

It was Goldstein’s immaculately executed inside turns and leave-out options that placed her in the leading position after her jump-off round. If you watch, you see that Goldstein comes in meaning business, taking the first inside turn after fence one to sneak up to fence two at an angle. “Wow,” both of the commentators said as she landed from fence two in spectacular form. Lizziemary showed off her huge stride between fences three and four, nailing the distance on seven strides. From that point on the round was neat and tidy, while still keeping the pace extremely competitive for those who would follow. And it proved to be a time that couldn’t be beat, sealing the victory for the second year running for this fiery pair.

Watch the round for yourself HERE!