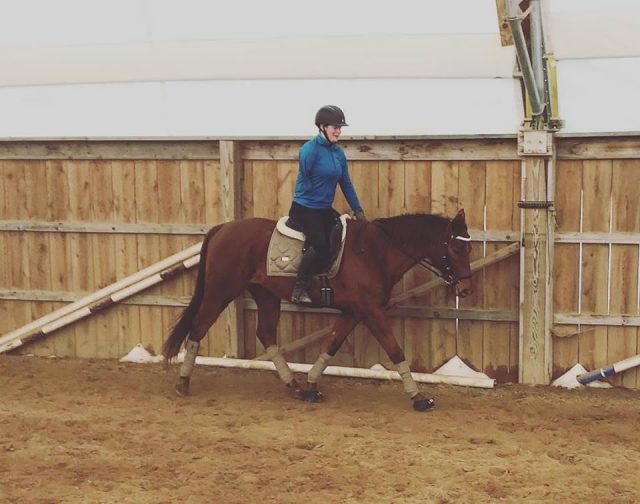 “I was gratified not only to see him go so nicely for another rider, but to know that my ‘flatwork is flatwork’ mentality with a focus on correct riding really did pay off, no matter what kind of saddle was on his back.” 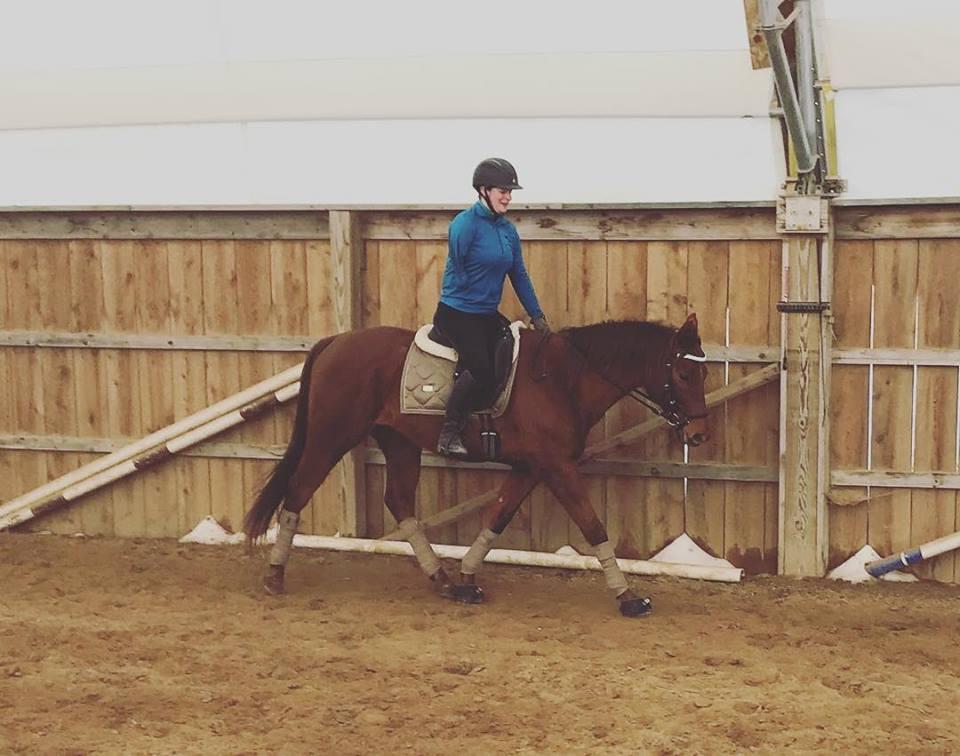 I took a lot of lessons from my out-of-town coach in 2018, and I have a great horse health network of farrier, vet, dentist, lameness vet, and chiropractor/vet. (I may also have a group chat with some other experienced horse owners called the Equestrichondria Triage Squad in which we assess with each other if something is farrier- or vet-worthy, or if we’re panicking about nothing. Spoiler alert: I tend to panic about nothing, a lot.)

But while I have this great support team — it takes a village, after all, no matter if you’re an international competitor or a weekend warrior — I do primarily hack it alone in my horse life… literally. About 99% of my riding is done solo, with just my border collie loping circles around me and Jobber for company.

It’s not a bad horse life, but admittedly, it does get lonely sometimes. And of course, with no one around to watch me and head me off at the pass before I developed all sorts of bad habits, my equitation and overall horsemanship in the saddle had likely suffered. So when a few opportunities came my way this month to hit the road with Jobber, I jumped at the chance.

I got to know Sarah Hepler pretty well through the 2018 Thoroughbred Makeover: thanks to her barn owner Neil, I was able to book a round-trip trailer ride for Jobber to Kentucky and back as the Hess Stables trailer would pass right through our farm (literally — our farm is divided in half by the interstate). His trailermate was Sarah’s veritable unicorn Fletcher, or “Flat Leaver,” a charismatic and talented horse that captured hearts with Sarah’s incredible performance in dressage (third place overall) and freestyle (many tears were shed). Having each other as a support system right off the bat as the trailer rolled into the Kentucky Horse Park gave both me and Sarah a boost of confidence, and we hacked and schooled together throughout the week. 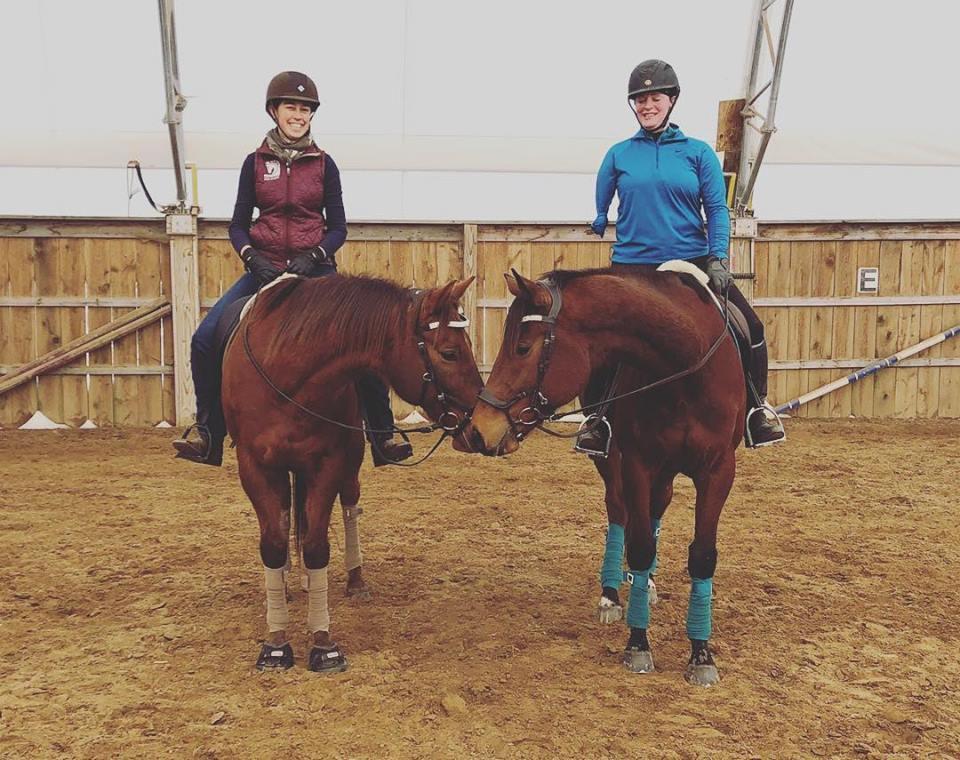 So when Sarah told me to come up to Hess any time to ride with her and her gang of fellow OTTB lovers and Makeover trainers — only one or two horses on the property are NOT Thoroughbreds — and a free weekend popped up unexpectedly in mid-February, after my various riding spaces were either too wet or too frozen to be safe or productive (and sometimes, somehow, both wet and frozen at the same time), we were ready for a visit. It was a three-hour haul up to Hess, but we were blessed with good weather.

My inner horse girl was out in full force that weekend, readers. The joys of riding with new friends, especially after a long and lonely winter of riding alone, plastered a big smile on my face that probably really didn’t go away all weekend. At one point, I looked around the indoor arena and counted two 2018 Makeover graduates, a 2017 Makeover graduate and two 2019 Makeover hopefuls, all ridden by the sweetest gang of supportive ladies in the horse business. 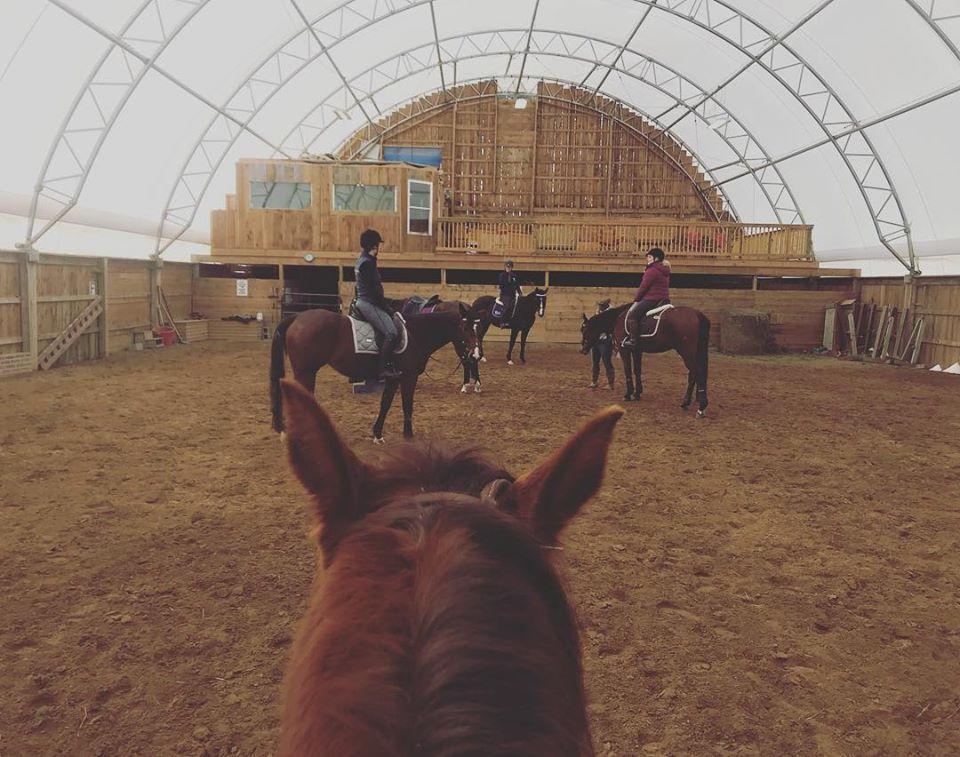 All of the Thoroughbreds. Photo by Kristen Kovatch

Naturally, we switched horses… several times. I hopped on Sarah’s 2019 hopeful Calvin, aka “Jacapo,” and enjoyed some nice stretchy walk and trot in Sarah’s comfy dressage saddle. Meanwhile, she was walking and jogging around on Jobber, enjoying her first western saddle in a long time. From there, I switched to Sarah’s 2017 mount Birdie, now owned by her friend Anna. We turned Jobber and Fletcher out for some indoor time to stretch their legs together and headed off for a wine tasting — which, in my opinion, is now how all riding days should end. 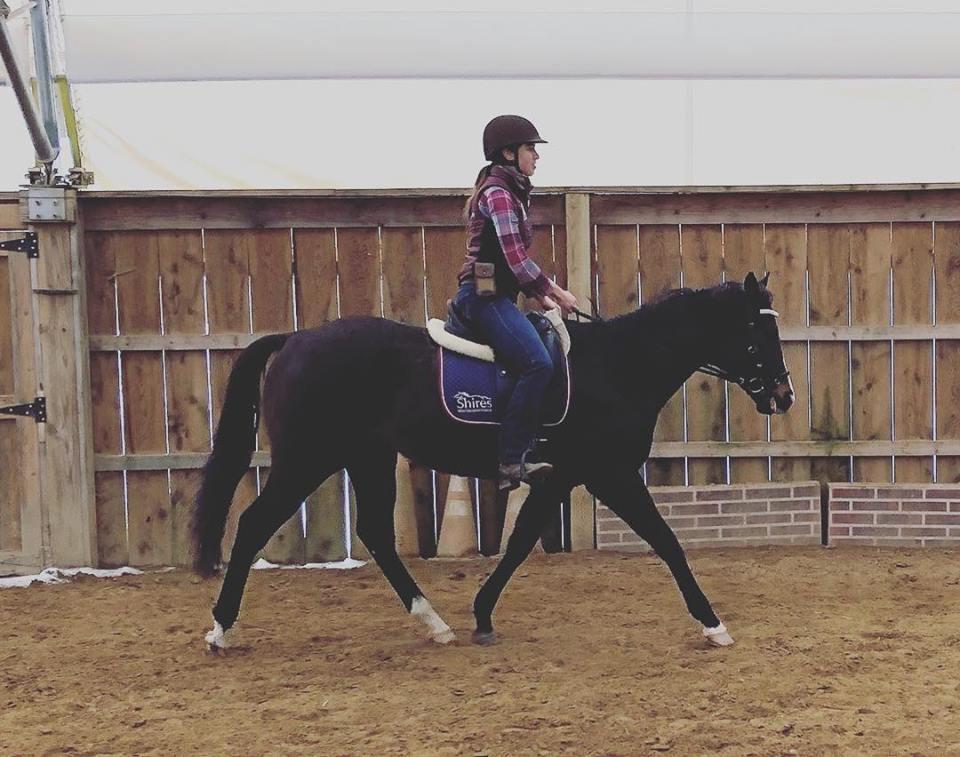 Taking Calvin for a spin, and plotting ways to also try him on cows sometime. Photo by Sarah Hepler.

The next day, we tried a pair of Cavallo boots on Jobber, who had finished out the day a bit footsore (he had been trimmed the week prior, just in time for the mud to refreeze into a bunch of knobbly lumps that were hell on his soles). Sarah got a gleam in her eye. “Let’s put him in dressage tack.”

Jobber was immediately dressed in one of Sarah’s spare dressage saddles with coordinating saddle pad and polo wraps, plus a rhinestone browband, because bling. 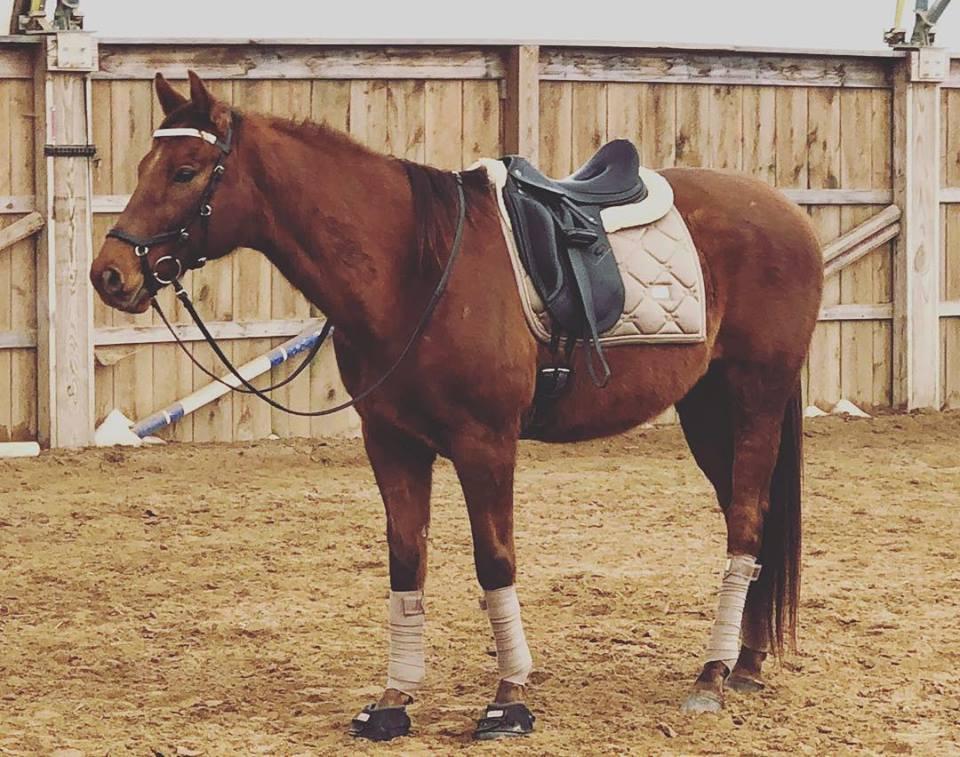 Because if you don’t get your horse all dressed up for the heck of it, are you even a crazy horse girl? Photo by Sarah Hepler.

All along my training process with Jobber, I’ve sought to look past tack and simply train him correctly — working to accept and seek contact, reach through from behind, lift his back and understand collection rather than being bullied into a semblance of a frame. In my mind, the tack shouldn’t matter much — but our lope, er, canter transitions in the dressage saddle were so much smoother, and I realized how much better the saddle held me in a position where I could be useful. This isn’t to say that my western saddle is a bad fit, but that I myself need to be fitter to be able to hold myself in that position for a strong, correct transition.

More gratifying to me was when Sarah hopped back on Jobber again and trotted him around, my little horse stretching down into her hand, driving up from behind and lifting his back. I was gratified not only to see him go so nicely for another rider, but to know that my “flatwork is flatwork” mentality with a focus on correct riding really did pay off, no matter what kind of saddle was on his back.

Jobber is still a ranch horse to the core, I believe — later in the week, I felt that familiar engagement when a horse instinctively locks on a cow to track it and work it, and I knew that Jobber really had found his calling here on the farm. But there’s no reason we can’t get all done up in rhinestones and wraps from time to time and fancy-prance with some friends. No one should really ever go it alone forever in the horse world, and I’m glad we have some new friends in our corner.