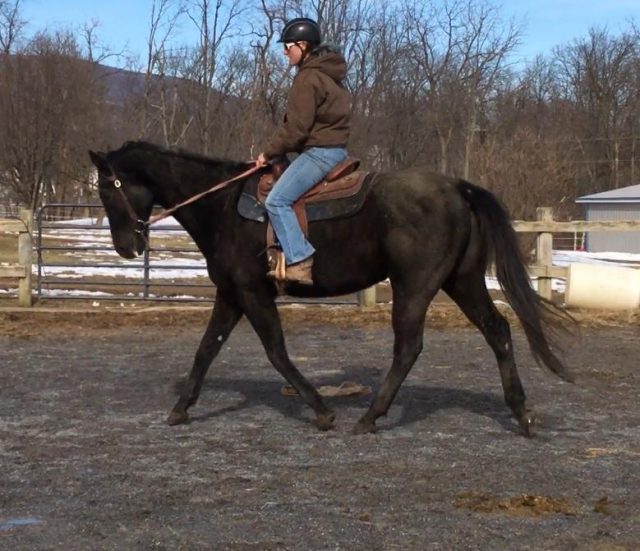 “Joey is currently up for adoption, and I have no doubt that he will find his perfect home, because, after all, chicks dig scars. Now ain’t that a kick in the head?” Ashley Francese tells the unlikely story about how a severe wound ended up saving a horse’s life.

Warning: contains images that may be graphic to some viewers.

For those of you of a certain age, the phrase “ain’t that a kick in the head” evokes the sound of Dean Martin’s crooning voice. For the Urban Dictionary crowd, the idiom refers to something that comes as a surprise. For a horse named Joey, a kick in the head actually saved his life. How lucky can one guy be?

Joey is not a horse who would ordinarily attract anyone’s attention. He’s a boring bay. Dark bay. No white. No chrome. No flash. A horse like that is easy to overlook. 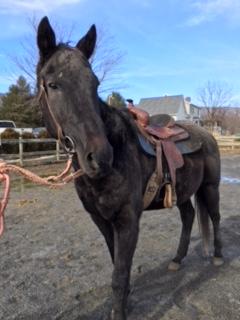 All photos courtesy of Allie Stahl-Smith

In December of 2018, Joey was purchased from an auction by a kill buyer. He ended up in a kill pen — and not a kill pen that advertises their horses, but one that ships directly out of the country. He very likely would have made the trip if he had not sustained an injury to his head that attracted the attention of a person who gave him a chance.

Allie Stahl-Smith runs a quarantine facility in Pennsylvania called Crazy K Farm. Her main business is quarantining horses for individuals and rescues who have pulled them from local kill pens, but Allie is the sort of person who believes in building a bigger table rather than a bigger fence, and occasionally, she takes in horses who are too thin, weak, sick or injured to make the trip to slaughter, and rehabilitates them herself.

Bi-weekly, Allie goes to the local kill pen to evaluate prospects and to share them on the internet in the hope of finding them homes. In the last week of December, Allie went to the pen to evaluate prospects, and she saw a dark bay gelding at the back of the pen. He would not let her catch him, so, she passed him by and promoted other horses. One week later, she went back to the pen on New Year’s Day, and she noticed that the dark bay horse that she had seen the previous week had sustained a serious head injury. She knew that he would not be fit to ship out of the country in that state. And despite her being nearly nine months pregnant, she brought Joey home. 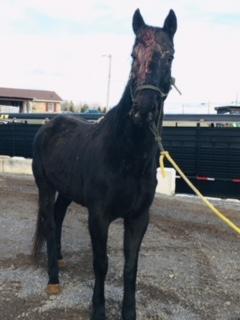 Joey’s injuries were literally unsightly — as in, when she posted pictures of him on Facebook, they were taken down for graphic content. He had an oozing gash on his forehead and was forced to sport a head wrap that would make any mummy jealous. 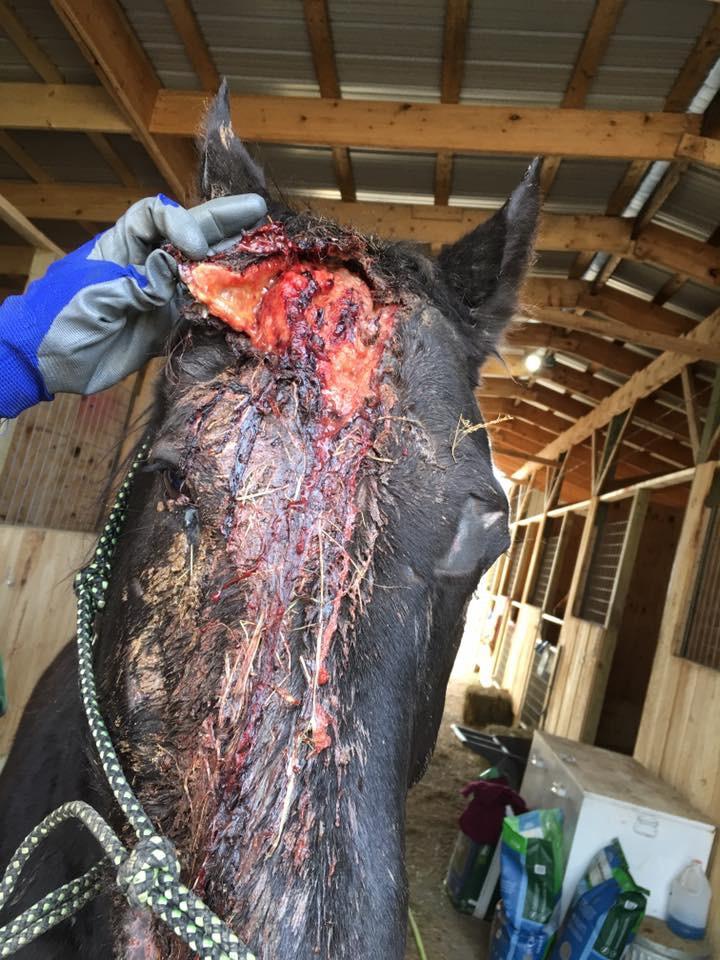 Joey spent his entire thirty-day quarantine period with his head wrapped. During that time, his physical wounds began to heal… and as he started to feel better, his personality started to express itself. He could be found holding his own leadrope, he would attempt to itch his head on passersby, and he would keep himself entertained during farrier visits. While he became a barn favorite, and drew attention on social media, Allie began to wonder who the man was behind the mask. 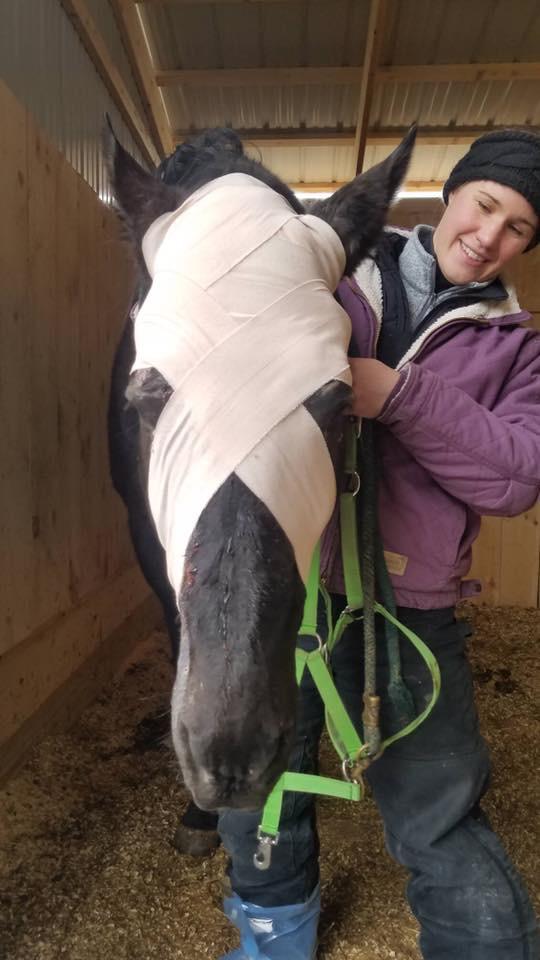 Allie did some research and found that he was a 1998 Thoroughbred gelding named Jazzin Joey, who was foaled in California, had run one race there, and somehow wound up purchased by a local kill buyer at an auction in New York. In mid February, out of quarantine, and with only a small scar left to show for his ordeal, Joey was finally ready to be tested under saddle.

After months off from riding, Joey walked, trotted, and cantered under saddle. He happily went in a frame, and even showed off some lateral movements. Joey had fully recovered from his injury, and was happy to be back to work. And Allie could not believe the gem that she had stumbled upon in taking a chance on an injured horse in a kill pen. 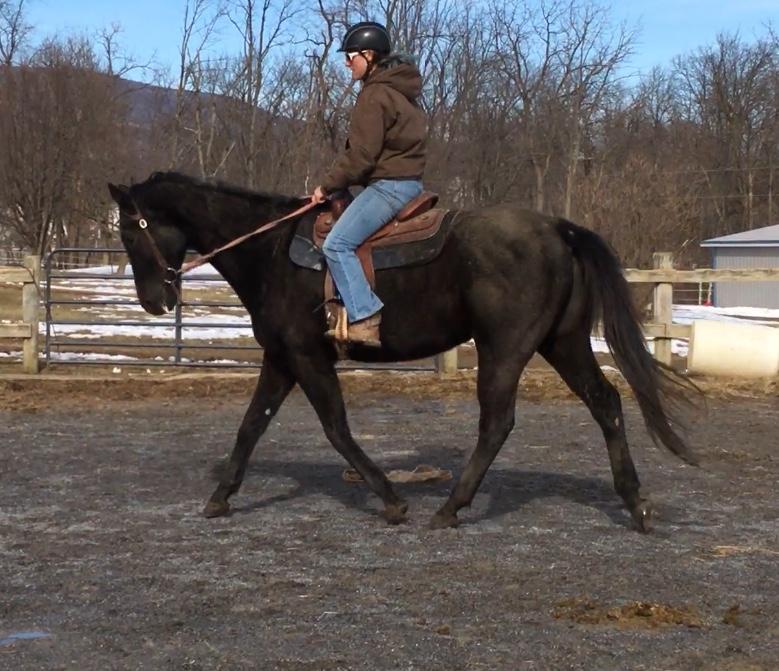 Joey’s story is unique in that there are very few instances in history where an injury has saved someone from death, or markedly changed their life. As a former Latin teacher, my mind jumps to the story of Mucius Scaevola, who was tasked with sneaking into an Etruscan camp disguised as a soldier to kill the king. Unfortunately, when Mucius arrived at the camp, there were two men on the dais: one the king and the other the king’s scribe. Since he could not very well ask the other soldiers which man was the king, Mucius took a shot and killed the man he thought was the king. He had a 50/50 chance, but he guessed wrong, and he murdered the king’s scribe.

The king ordered his guards to torture Mucius, but Mucius thrust his right hand into a fire and burned it off to show that he would not squeal no matter how much physical torture he had to endure. The king was so impressed with Mucius’s bravery (or terrified at his crazy) that he let him return to Rome. And upon his return the Romans gave him the cognomen Scaevola, or “lefty,” due to the fact that he only had a left hand remaining.

I like to imagine Joey living in Roman times. What honorific cognomen would the Romans have bestowed on him to mark his victory? Would they have called him Scarface? On the surface the Romans’ habit of bestowing cognomina on people based on their physical attributes seems harsh. But if those attributes were won through bravery, or if those attributes led to a better life, then why not bear them proudly?

It was Joey’s injury that got him noticed, but it’s his character that makes him so charismatic. Even before he got his scar, Joey was a special horse. He is a dream to ride and he has a wonderfully silly personality. Joey is currently up for adoption, and I have no doubt that he will find his perfect home, because, after all, chicks dig scars. Now ain’t that a kick in the head?