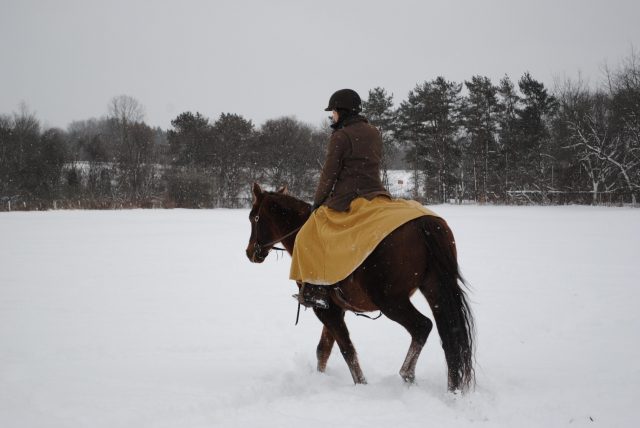 After a year of riding in the open pasture with her OTTB, Kristen Kovatch achieves a minor, yet important milestone. Riders battling demons of confidence, this one’s for you. 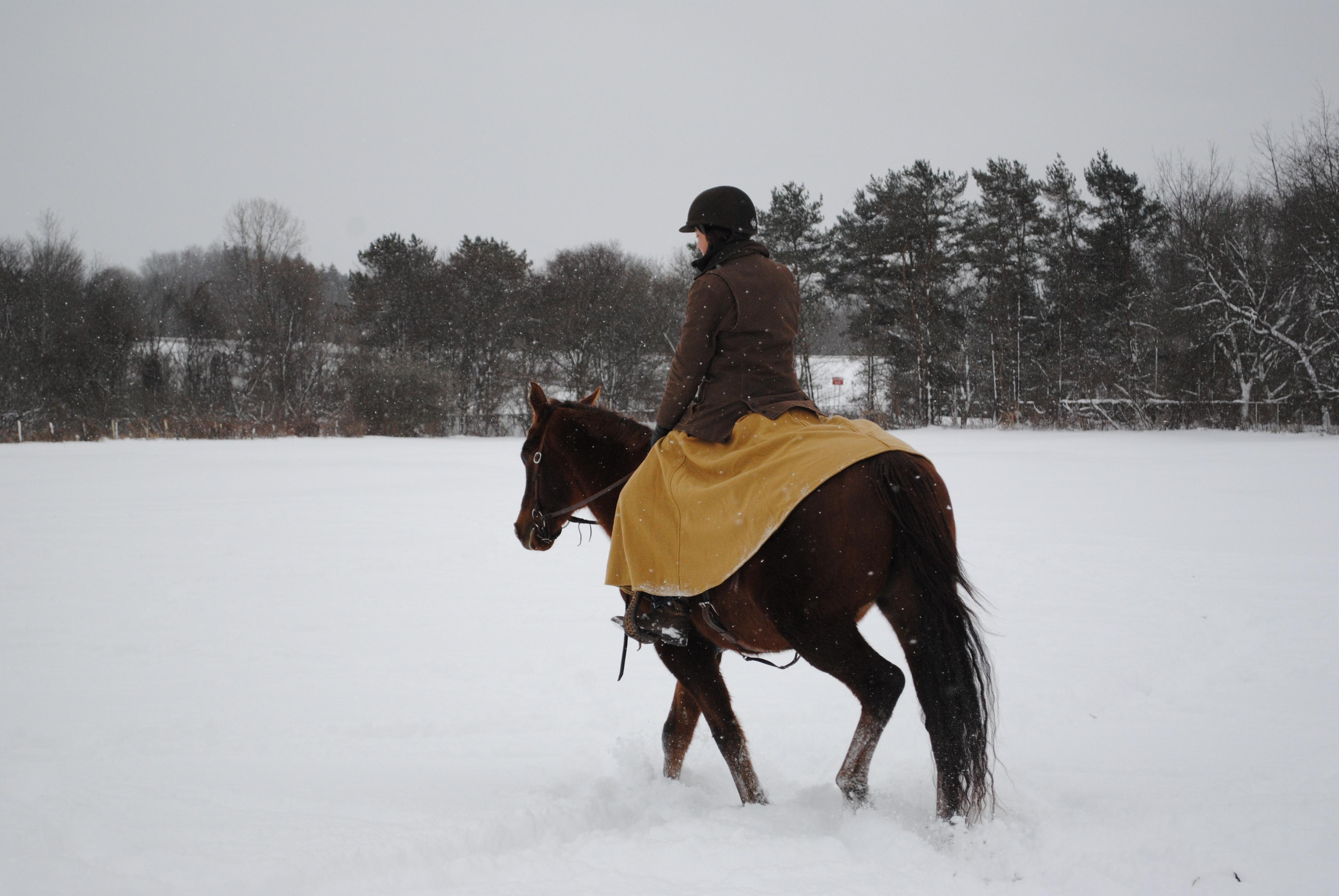 I reached a small yet noteworthy milestone with my race horse-turned-ranch horse Jobber last week.

After a long roller coaster of bad weather creating even worse ground in my arena-less world — the options fluctuated back and forth from “frozen chunks hidden by snow” to “sodden swamp that you’ll ruin now for grazing in the spring” — we finally had good-enough footing to go for a canter. Jobber was super pumped about this, as one might imagine for a high-metabolism horse, and got a little spicy when he realized I was asking him to step up into the lope: he’s not a bucker or even a crow-hopper, for which I am grateful, but he does like to leap when he’s excited.

And rather than anxiously clutch at the reins, as was my normal M.O. when he’s fresh, I laughed. I closed my leg, I put a loop in the rein and I sent him forward in his gyrating excitement into a joyous canter.

For individuals who are used to riding salty horses across wide-open spaces all the time, this is probably a snoozer of a story for you. For individuals with a little bit of baggage from ghosts of the past, this story is for you.

Riding arenas are lovely inventions: a flat, usually enclosed, regularly-shaped space with maintained good ground. They’re level. They may include some low spots that always gather water no matter how much you try to harrow them, and there’s generally one “spooky corner” for whatever reason, but they’re essentially safe romper rooms where you can blissfully ride circles and figures to your heart’s content. Covered or indoor arenas are truly a gift to equestrians, allowing us to create an artificial summer (or at least not be riding out in the rain and snow) all year round.

The first time I hauled Jobber to an indoor arena, about a year ago, I remember looking down at my old mentor who was trying to coach us through a sticky left lead. “This is basically like riding in a hockey rink,” I told him, pitching my reins at Jobber and letting him figure some things out free from my bit-clutching interference. “He’s not going to go anywhere.”

“Going somewhere” was the daunting, vaguely-ominous quiet fear that rode on my shoulder all of last year as I embarked on this race horse-to-ranch horse project, fueled partially by my stereotypical beliefs that a Thoroughbred ex-racehorse given wide open spaces to run was going to take advantage of that and never stop, and partially by some baggage from a few years of getting tossed around in the saddle by a little horse I was determined to love despite a whole host of other issues that would leave me just barely hanging on for dear life as he careened about the pasture.

Jobber, bless his heart, has no idea that he carries this much around when I throw a leg over the saddle. He’s just a horse, who is sometimes super pumped to lope, as horses do. But combined with my anxiety that he’s going to buck and bolt off (which he’s never done) and subsequently fall in a hole or a ditch, or trip over a sleeping cow, or whatever other random hazards exist when you’re on #TeamNoArena, every minor and occasional moment of “yeehaw, I’m so happy to be alive” turned into me clutching at the reins trying desperately to pep-talk myself into just riding the horse.

There was no real magic remedy or sports psychology mantra that cured this — just time, and the gradual realization that even at his worst, Jobber was still going to take care of me. He would get fresh, he would get jazzed, and things like mere walking would be hard — but if I sat up, sent him forward, and gave him something to do, we would all be just fine.

This is not a commercial to say that you can take any ol’ OTTB off the track and into the cow pasture and go to work. Some people do — I have immense respect for folks like Dale Simanton at Gate to Great, who is living my OTTB cowboy dream — and many people are braver horseman than I am. Jobber had plenty of letdown time, plus a dozen initial post-track rides from his first owner, which certainly set me up for success in my arena-less setting.

This is also not for me to sit here and call myself some sort of bad-ass for doing all of my training out in the cow pasture. I am grateful, however, in a weird way, that I don’t have an arena. I documented our early struggles last year to find connection and contact and work over Jobber’s herd anxiety in detail (you can click the Jobber Bill tag at the top of the page to find more), and while there was plenty of struggle, I know now from experience that Jobber is a better, more well-broke horse because of it, and I’m certainly a more confident rider with a better belief in my ability to turn a race horse into a ranch horse.

A new crop of Thoroughbred Makeover trainers is starting down their own roads this year, and while there are plenty of veterans and bad-asses who can laugh off that fresh horse in an open pasture, I’m sure there are some like me — both in and out of the arena. Apart from the Makeover, I know there are plenty of riders out there chasing their confidence in the ring, on the trail or out in the open field. If you’re reading this, know that I’ve been there. I’m still there now, some of the time. But we can do this. Saddle up and go riding.