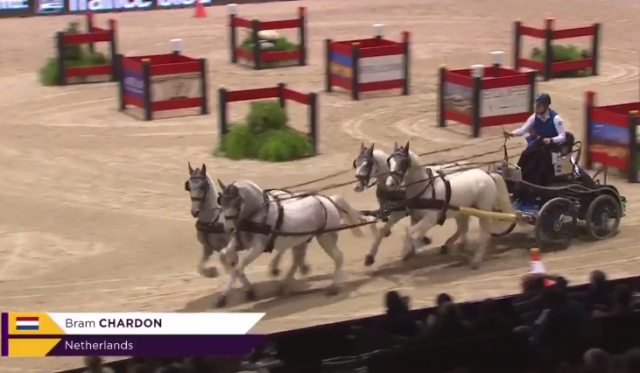 Eyes were on the favorite, Boyd Exell, who was going for what could have been his ninth World Cup Finals — but when the dust settled, the new victor and king of indoor driving was Bram Chardon, just 25 years old, in a very family affair with his sister serving as navigator. The Chardon siblings also beat out dad Ijsbrand to claim the crown.

Bram Chardon now goes into the history books as the youngest ever driver to take a World Cup title. Here’s how he did it:

THERE’S A NEW CHAMPION IN THE HOUSE AND HIS NAME IS BRAM CHARDON! 🎉🎊🏆😱Dethroning the legendary king, Bram Chardon has made history at Jumping International de Bordeaux becoming the youngest ever champion at just 25!!!The definition of heart-in-mouth action, Bram and his team gave the ultimate performance as they attacked the track with pure precision. Working every inch of the track, no-one could dare to look away as this incredible young driver took his very first FEI Driving World Cup Finals WIN! 🏁🇳🇱Huge congratulations to the Chardon Family!🍾🏆

Ah, indoor driving… why are you not a sport that packs the stadium in the US? We may never know.