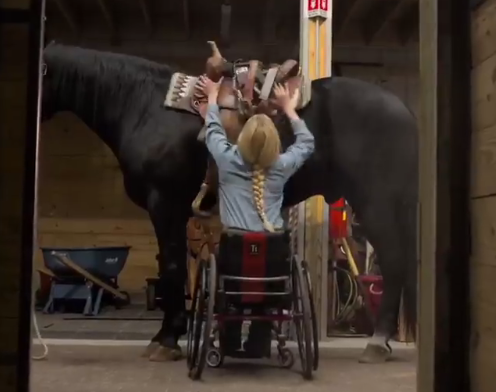 Amberley Snyder’s story of barrel racing after an accident left her paralyzed from the waist down has inspired thousands of followers on social media — and now her story will reach a brand-new audience thanks to Netflix.

Amberley Snyder was an accomplished high school rodeo athlete, competing in barrel racing, pole bending, breakaway roping and goat tying; she was a leader in Utah state FFA with a promising career ahead of her. In January of 2010, she had an auto accident that left her paralyzed from the waist down. Despite doctors warning her that she would not ride again, Snyder found her way into the saddle just four months after the accident, and through plenty of adversity, started to compete again.

While Snyder’s story is inspiring enough on its own, her positivity throughout her ordeal and her grace in transitioning to her new reality have inspired thousands of fans to follow her on social media. Originally through her “Wheelchair Wednesday” series of videos, demonstrating how she tackles life’s daily challenges from saddling her horse to fueling her truck at the gas station, Snyder has amassed a following of close to 200,000 on Facebook. She’s been invited to speak as a motivational figure all over the United States to remind new audiences to never give up.

And now Snyder’s story will reach a brand new audience: a Netflix movie portraying Snyder’s rodeo career, her accident and her struggle and triumph to get back on that horse will be released on March 8. Titled Walk. Ride. Rodeo., the film stars Spencer Locke in the leading role. Watch the trailer:

In a fascinating twist, Amberley Snyder is the stunt rider for Spencer Locke for all of the post-accident riding scenes — so she’s the double for the actress playing herself! There’s certainly no one more authentic than the rider herself. Snyder also served as a consultant for the film.

Keep an eye out for Walk. Ride. Rodeo. on March 8!