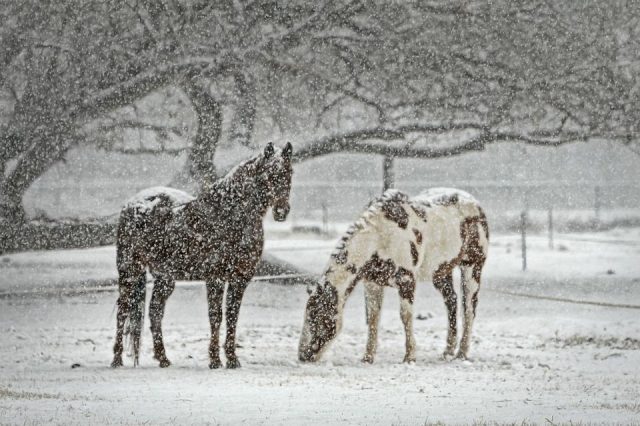 You can be as prepared as you want, but you still won’t actually be prepared. 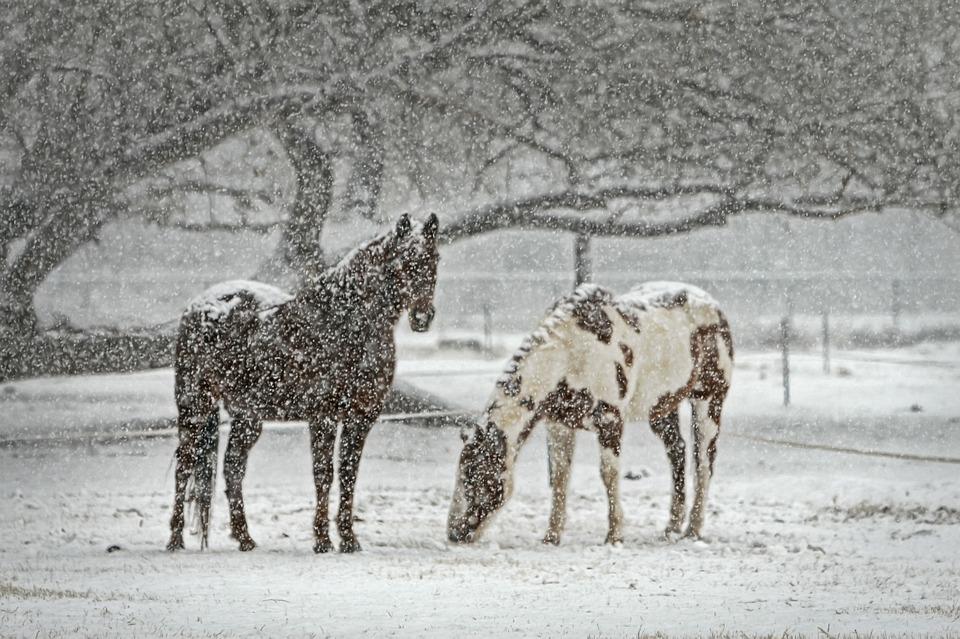 I’ve been guilty of extolling the virtues of wintertime riding in the past, proclaiming how much fun it is to ride in a snow-covered field or take your horses sleighing or even just the simple pleasures of letting the seasons dictate your horse life, reminding us all to slow down and enjoy some quieter moments before the summer season ramps us back into high gear.

Now that I’ve lived well over a decade of winters in the snow belt, where normal winter temperatures range from the teens to mid-twenties and snowfall is measured in feet rather than inches, I still believe these things to be true.

But there are a few other truths about winter that I’ve come to accept as fact as well:

1. No matter how inviting you make your run-in shed, the horses won’t use it.

Because who would want to stand in a (from a human perspective) perfectly nice three-sided shelter providing a windblock from blowing, sticking snow when they could instead hang out in a veritable blizzard turning into mammoth-like ice monsters? They literally stood around and watched me re-bed the shed before the last polar vortex, walked in, pooped, and left. To the best of my observational awareness, they have not returned. So glad I spent all that money to have this thing custom-built for you ungrateful feral jerks.

2. Your blanket “system” will inevitably break down.

Every autumn, I take stock of my sheet and blanket inventory and invent a nice little weather scale in my head for when each sheet or blanket will be used, depending on the individual horse and his needs (the high-metabolism OTTB and the 20+ year old seniors get some special care… the fat, yaklike middle-aged Quarter horse who receives approximately 8 pellets of grain a day could probably live happily at the Antarctic research station with the penguins).

By the end of January, this neat little temperature/precipitation gauge has totally broken down into a revolving door of wet, muddy blankets, with the ones whose waterproofing has finally up the ghost dumped unceremoniously over a stall wall to be pirated later for parts and patches, with Jobber wearing what used to belong to Winston and vice-versa, Rocky going naked because he trotted joyfully away from you into the sleet when you tried to switch his medium for a sheet, and the yaklike Quarter horse suddenly decked in a waterproof sheet with a fleece liner when he turned up shivering in the last major snowstorm.

3. Something is going to freeze.

This year, so far, it was my heated automatic waterer in the winter paddock (fortunately, it was an easy fix once the weather warmed back up and only required about 36 hours of manual watering and a new heating unit) and one of the sliding barn doors (which in our valiant attempts to unfreeze, managed to break off of its track, requiring a much more obnoxious repair than if we had just sat on our hands and waited like patient people).

This is still a step ahead of previous years in which all of the automatic waterers froze, the driveway froze into a sheet of totally untraversable ice and both barn doors froze requiring us to hike through three feet of snow to the back door and dig it out with our hands.

Chin up, Horse Nation. Only a few more months until spring!