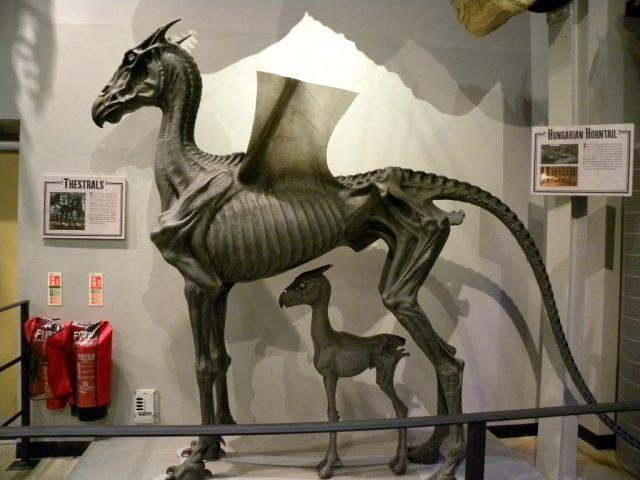 “I think that J.K. Rowling intentionally chose a horse-like creature to illustrate grief and the metaphor of empathy and vulnerability.” Mary Hollis Baird finds an equestrian life lesson in the beloved pages of Harry Potter. A Thestral model on display in the Harry Potter studio tour at Warner Brothers London. Photo via Creative Commons/Rev Stan/Flickr.

The Harry Potter universe is littered with equine-esque creatures that we all recognize from mythology or folk lore of some kind. I’m talking centaurs, hippogriffs (half-eagle, half-horse, flying creature of legend), unicorns, or Abraxans (the gigantic palomino and winged horses like a Pegasus, but more hardcore since they only drink single-malt whiskey). These are myths with which we, as a culture, are most familiar.

For me, the most intriguing equines in the Harry Potter universe are the thestrals. Described in book five of the series:

“A pair of blank, white, shining eyes were growing larger through the gloom and a moment later the dragonish face, neck and then skeletal body of a great, black, winged horse emerged from the darkness … swishing its long black tail”

There’s no conclusive evidence where exactly the idea of the thestrals came to J.K. Rowling. The most popular fan theory is the thestrals originated from a Celtic Myth entitled “N’oun Doare.” It’s a story of a prodigal son returning home to his kingdom and having to go through a series of tasks to earn his rightful place on the throne. His tools for the success of the mission include weapons and a fantastical horse that looks like a nag.

As the story goes, the prince can see past the skeletally thin mare and appreciate her for her keen sense of direction, loyalty and magical transportation abilities (whenever a knot on her halter is undone, she transports you 500 leagues instantly). In some translations the mare is called, “The Mare of Doom.” (***GREAT show name alert***).

The hosts of the Binge Mode: Harry Potter podcast, Mallory Rubin and Jason Concepcion, sum up the thestrals’ skills as:

“They have incredible sense of smell and direction. Unlike most animals, they can understand exactly where to go, even if just given the destination, rather than specific, step-by-step instructions. They can carry human riders and fly very fast.”

On Pottermore, J.K. Rowling, herself, writes, “While somewhat intimidating in appearance, these carnivorous horses are emblematic of a journey to another dimension, and reward all who trust them with faithfulness and obedience.”

Thestrals play a key role in the plot, however their metaphor about beauty and death and grief is one of the most thematically relevant of the entire Harry Potter series. Characters that can see thestrals are some of the most empathetic in the entire series. A key component of the thestrals’ visibility is only people who have seen death AND processed its greater significance can see them. This allows only the most empathetic characters to connect and interact with the winged-beasts.

I think if you asked most people what’s the character of Harry Potter’s greatest strength, then you’d get a myriad of response like: ‘brave,’ ‘loyal to his friends,’ ‘standing up for what is right in the face of evil.’ However, I would argue that Harry’s most powerful attribute is his empathy. His empathy makes all the aforementioned qualities possible. The thestrals in the Order of the Phoenix really illustrate this concept; their scary, almost demonic, appearance belie an innate gentleness.

The thestrals are the epitome of beauty and kindness born out of death. Only empathy and acceptance of grief allow people to see and command a thestral. Harry’s embrace of love and empathy makes his grief a tool. It’s almost a superpower against his greatest enemy, Voldemort, a character defined by a fear of death and an apathy to the hurt and suffering of other beings.

I think that J.K. Rowling intentionally chose a horse-like creature to illustrate grief and the metaphor of empathy and vulnerability.

Binge Mode cites the thestrals as, “a signature J.K. Rowling achievement to take something many people think of as fearful and shameful and dirty and wrong, and to say, ‘no’ and say, ‘this is about growth and understanding’.”

A defining feature of the modern equine is dependence on humans, which requires empathy from us, or else we will never fully unlock the wonderful rewards these creatures can bestow in our lives.

All of us must embrace empathy. It’s a crucial tenet to any successful rider. Empathy as a rider allows us to teach our horses in the best way possible. Empathy as an owner means they get the best care. Empathy for our fellow competitor engenders the wonderful community in which we, as equestrians, pride ourselves.