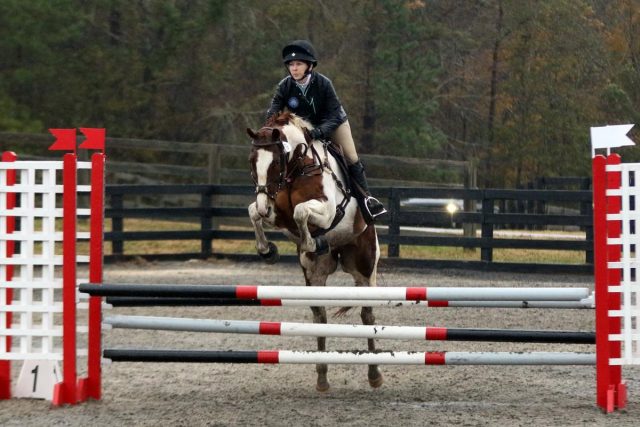 Well, we just wrapped up another great eventing weekend and JJ stepped up once again to leave me smiling after it was all said and done.

After getting his clipping catastrophe straightened out a few days before to prepare for the forecasted warm weekend, we hauled down to Poplar Place Farm on Friday morning. My barn bestie and Mare Goods owner, Mary Campbell, was also competing, so JJ got to enjoy the ride alongside his barn bestie, Cali.

Mary and I, along with my husband, Erik, arrived early and got our stalls set up. When our coach, Lauren Turner of River Birch Farm, arrived with a few other students, we tacked up and headed down to school our cross country courses. The weather up until then had been fairly bleak, but the clouds parted and the sun came out just as we started and it wound up being a warm, incredibly perfect day.

(Side note: Friday marked exactly two years since I was in a bad car accident and my injured foot decided to remind me of that by celebrating with intense pain. I tried to stretch it out, but that didn’t work. Instead, I just rode through it and didn’t say anything. Ugh, that sucked. But hey, I was happy to be hurting and on a horse instead of hurting and in the emergency room again!)

We started out over some warm-up fences and they all went well. JJ was happy and relaxed, and Lauren soon had us pop over a couple Training questions which JJ answered perfectly. We then started to work through the course as a small group, one jump at a time, and JJ didn’t have a problem with any of ’em. It had been about three months since we had done any cross country, so I was tremendously pleased with his performance. 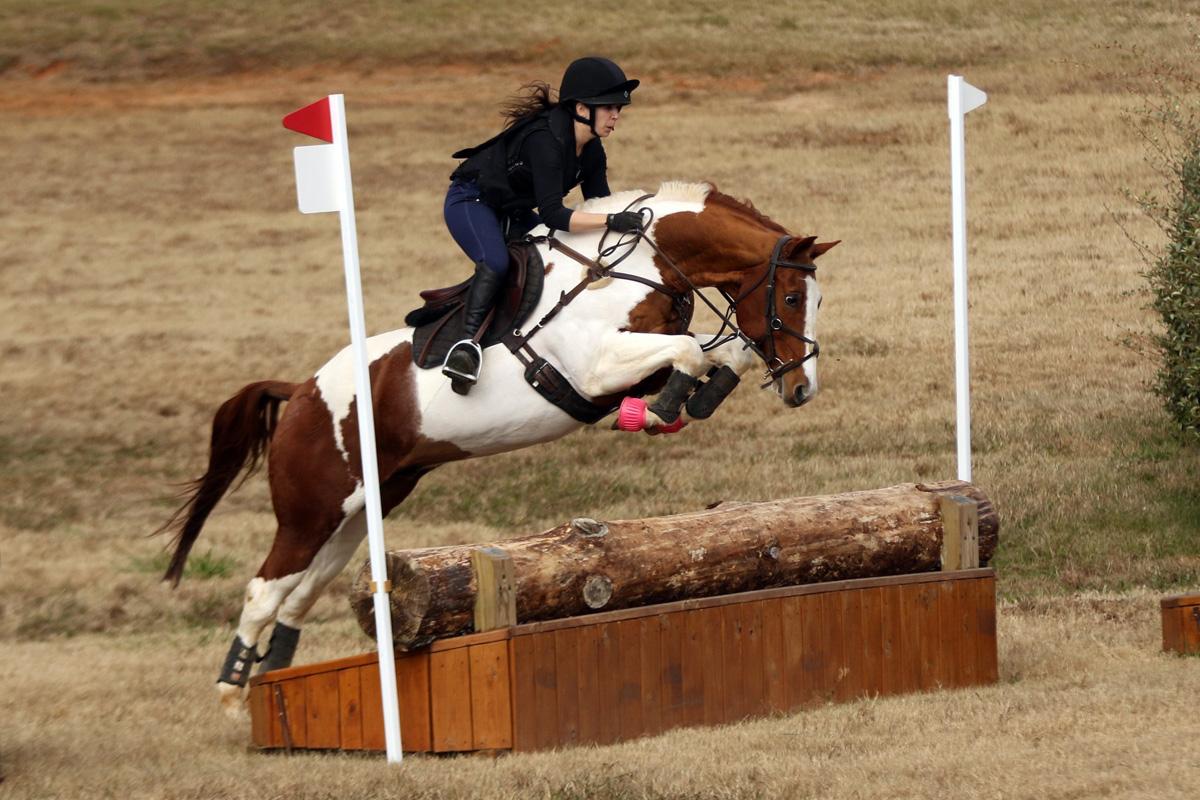 I can’t even with how perfect he is. (Photo by Erik Jacobs of P.TEN Marketing)

As we progressed through the course, Lauren schooled us over all of our Novice fences and had us hit a few more Training obstacles. JJ made all of them feel easy and effortless, including our first ramp/skinny. He was a little *dramatic* over the ditch portion of our coffin combo but whatevs, I stayed on and we got it done.

A fun team dinner (my first outing with Team River Birch) capped off a great day, and I was ready to do it all over the next morning.

Unfortunately, the weather turned overnight and it went from wonderful to wet. It was pouring when I woke up, and the radar didn’t show any breaks in the clouds. Oh well. Good thing I brought spare clothes and my new Ride Heels Down waterproof jacket!

After JJ’s opinions about a long dressage warmup a couple weeks ago, I kept this one short. Twenty minutes, max, was all Lauren and I needed to get him tuned up. We went into the ring and threw down what I thought to be a fairly good (for us) test. Apparently, I was wrong – because we scored about the same as we do when we have a bad (for us) test, too, so who the hell knows. Dressage, you are an elusive and fickle beast.

Anyway, on to stadium – yay! There had been a brief delay for some lightning (because the rain didn’t stop all day long) so things were running a bit behind. Cross country wound up being canceled because the footing had deteriorated beyond the point of being safe from the nonstop deluge, so the three-phase divisions were being scored as CTs instead. The show office told me that they were currently running 2’11” jump rounds and that the Novice group could just head down whenever they were ready and go out of order, so that’s what we did.

Except that when we go to warmup, we were the only ones there and there was no ring steward. There was a small crossrail, a medium vertical, and an oxer that was definitely larger than Novice but seemed do-able and not entirely terrifying… I figured maybe it was Training, and if no one showed up to reset it, I would just jump it as is and get on with my day. So, we did a few laps to loosen up and as we were popping the crossrail, Lauren arrived and frantically told me to stop – they were still running Prelim, not Novice! …which means that “not so scary” oxer was actually Prelim, and the fact that I wasn’t scared by it actually kinda scares me!

So, we trekked back to the barn for a little intermission. JJ took a quick snooze under his cooler, and I waited until Prelim and Training had finished before going back down. Lauren schooled me over appropriately-sized jumps, and JJ was feeling GOOD. All the while, the rain was still coming down so hard that I had to squint to see where I was going. And it was COLD.

When it was finally our turn to go, I knew it was going to be a fun round. JJ was right there for me, listening and being a partner. There were a couple spots where I saw a distance and then questioned myself because I wasn’t sure of the footing, but he made the right judgement call each time and cleared everything flawlessly. I even think he had a bit of fun splashing around in the muck.

He is knees-to-nose perfect. (Photo by Erik Jacobs of P.TEN Marketing)

It was over way too soon, and while I was definitely bummed about not getting to run a three-phase, I was super thrilled with how well our cross country schooling had gone the day before.

JJ gave me a big boost of confidence, and the Training stuff we tackled seemed easy. Looking at the pictures from the weekend, it’s clear that HE is ready to make the move up as he jumped everything with tons of room to spare… hopefully I will be ready soon, too.

In the interim, I’ve gone ahead and registered for my first actual USEA recognized Novice event next month – eep!!

We struggled for so many years, but I’m really enjoying this brief hiatus where it’s easy and we’re just having fun.