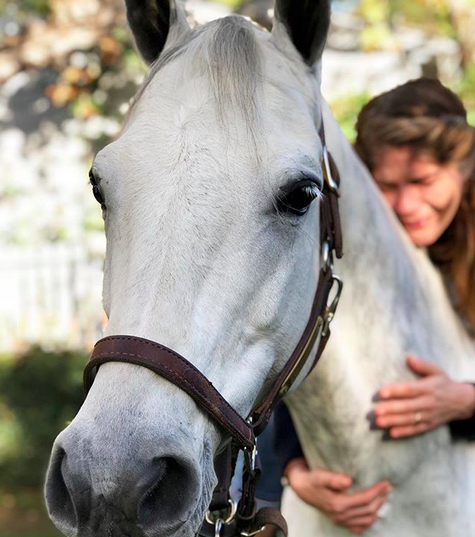 You might be most familiar with Selma Blair as an actress — remember her in Legally Blonde and Cruel Intentions and Hellboy? What you may not have realized is that she’s an equestrian as well; the actress’ Instagram feed is peppered with beautiful photos of herself and her beloved horse Skytop, known to his friends as Mr. Nibbles. It was just over a year ago that Mr. Nibbles came into Selma’s life:

Welcome to our heart #SkyTop . Thank you #cellardoorequestrian for making this dream come true. Look at this animal team! Gorgeous!! #kindeye #winner ?

He is the real deal. Rode #skytop for the first time today. Nicest horse I have ever known, with potential to spare. Now what should his nickname be? I won’t change his show name. But he needs an everyday barn name. Suggestions? No Cloud or Dream or Heaven or Marshmallow please! ?

They appeared to be a match made in heaven, one of those magical combinations where horse and rider truly seem to click. After all, every horse deserves to be loved by a horse-crazy gal, and every gal deserves a horse that lets her feel like a little kid falling in love with horses for the first time.

Cuddles with Your Majesty, Mr. Nibbles.

Mr. Nibbles is doing what he does. Cuddles. And I love him. #cellardoorfarm #cellardoorequestrian

And yes, they show some too.

? FIRST is WORST ! SECOND is BEST! ❤️ Our horses are the ones with the hairy chests!! ? just a little sore loser sportsmanship taught to me by my son. Congratulations @dglovesdogsandponies ⭐️ what a stellar #cellardoorequestrian team we have! Thank you @majormotionfarms for your greatness and support. So much love and #horseshow shenanigans. #mrnibbles #sherlock #hunters #winners #iago

But soon after Selma Blair was formally diagnosed with multiple sclerosis (MS) in August, which she publicly announced via Instagram in October, an exacerbation or flare-up forced her to take time out of the saddle. As we’re all aware of the power of horses for emotional support and healing, one can imagination how devastating this must have been. Selma has stated that she believes she’s had MS for about 15 years, having suffered the symptoms.

Earlier this week, however, Selma’s barn community did something amazing: when she was unable to get to the barn to see her beloved Mr. Nibbles, they brought Mr. Nibbles to her. Right in the front lawn, Selma was reunited with her horse, and the photos tell all in what was obviously an emotional moment.

This happened. My magical unicorn, #mrnibbles , held my body while I broke open with gratitude. I haven’t been able to ride for four months or more. I haven’t been able to get to him, so my saint of a trainer, @kjrides brought him to me. It was a fairytale. My horse in my front yard, with more emotions than these words can hold. The gratitude. Thank you #cellardoorequestrian for knowing when I needed you the most. I will heal. I will ride. But until then I will hold onto this feeling and post pictures whenever we all need to believe people will move mountains and horses to help us heal. Thank you @lyon_hearted for arranging this. All my love ❤️ @cellardoorequestrian , my angels. #tearsofjoy ? #mystory

Selma’s story is inspiring her social media followers, including not just fans but equestrians and those also suffering from MS. While there is no cure for MS, the actress remains positive, and her uplifting spirit is clearly helping others.

We believe in the unspoken healing power of horses and hope that Selma can return to the barn soon to spend more time with her “magical unicorn.” Best wishes to you, Selma Blair!