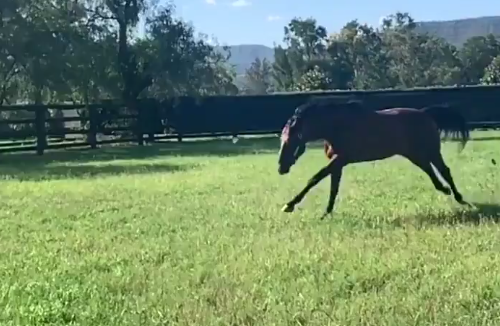 American Pharoah, winner of the 2015 Triple Crown and Breeders’ Cup Classic, retired to Coolmore’s American outpost at Ashford Stud after his three-year-old year, and it was announced shortly after that he would also shuttle to Coolmore’s Australian farm for the Southern Hemisphere’s opposite breeding season.

At the twilight hours of Australia’s season and shortly before American Pharoah is slated to fly back to the United States for the 2019 season, Coolmore shared this video on social media. Despite what we’re sure was a busy season down under, American Pharoah looks none the worse — in fact, he’s looking like he’s in top form!

American Pharoah is in great form being turned out in his paddock this morning, enjoying the final days under the summer sun before heading back to @coolmoreamerica ☀️@CoolmoreAus #summer pic.twitter.com/Hcl4YxhQLb

A year of endless summer looks good on you, Pharoah!