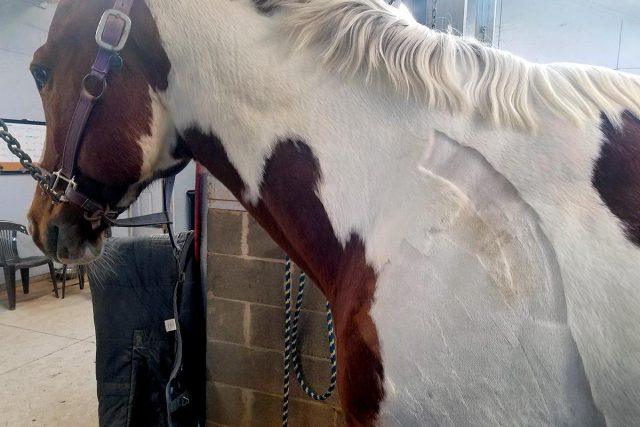 “These clippers should be fine.” Famous last words… 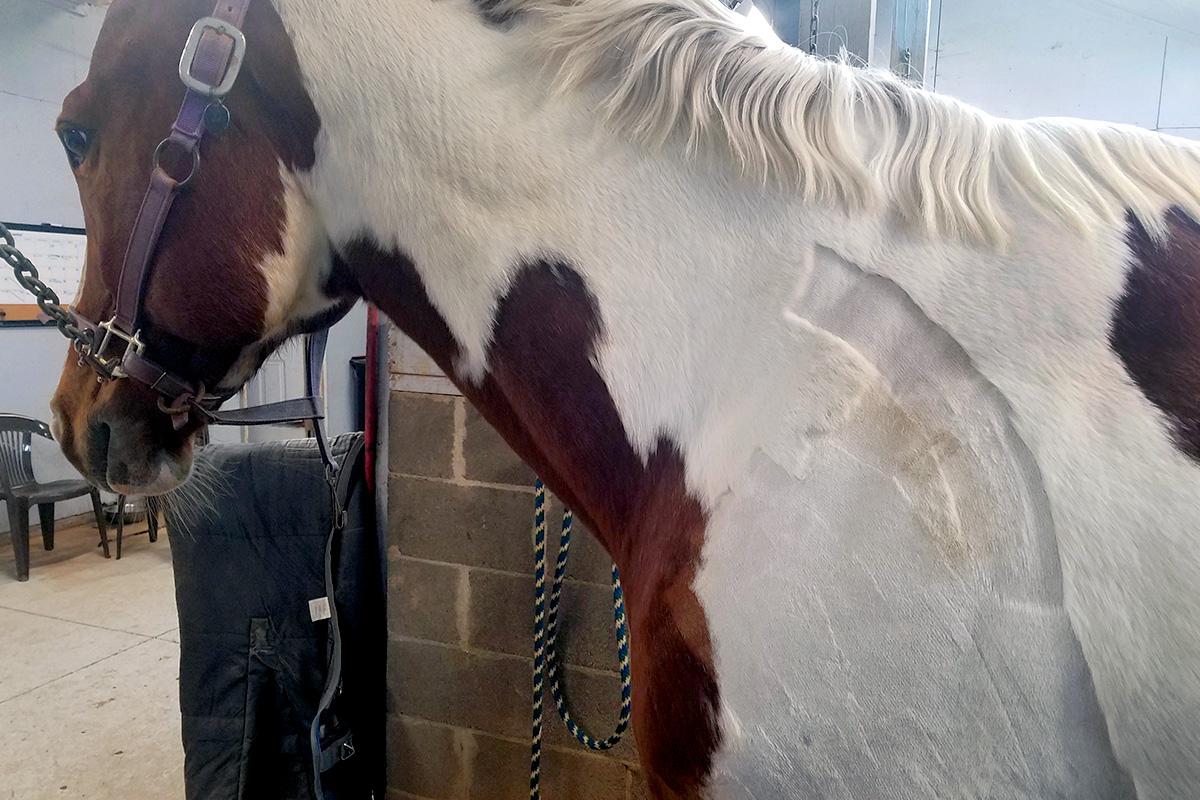 Sorry, JJ. Mom’s an idiot. (Photo by Ainsley Jacobs of Ride Heels Down)

It’s always a good idea to leave things until the last minute, right? Something about “sink or swim,” or “do or die,” or “trial by fire” blah blah blah… Well, today I learned how to body clip, and JJ was my test dummy.

We have an event coming up this weekend (SO EXCITED!) and JJ prepared by growing the world’s fluffiest winter coat. Seriously. He’s SO floofy, in fact, that I actually had him tested for Cushing’s, just in case… the results came back normal (thank God); he just really is that much of a hairy beast.

Being that he got clipped in January when we were in Ocala, I figured I would clip him again this winter. Except that it’s been below freezing (literally) this week in Atlanta, so I didn’t bother. Except that now it’s supposed to be in the 70s this weekend at Poplar AND there’s a ton of rain in the forecast to boot.

So, what’s a girl to do? Clip at the last minute. Except that – other than little things like bridle paths and fetlocks – I’ve never clipped before. What’s the worst that could happen?

To prepare, I read articles online and brushed up on “clipping tips.” I had all the things. Clippers, check. Oil, check. Cooling spray, check. Spare blades? Nah, my clippers are fairly new-ish and have only been used for the aforementioned small jobs. They should be fine. #FamousLastWords

With JJ firmly asleep in crossties (bless his little heart) I dove right in with ambition and ignorance. I GOT THIS! I clipped a few big paths up his shoulder and everything was going fine until, well, until nothing. The clippers basically stopped working instantly and I wasn’t getting any clippage at all. None. Zero. Nada. WTF?

The blades weren’t hot, the clippers weren’t jammed, I didn’t get it. So I touched the blades. Uhhh… they’re not supposed to be round on the edges. Way to go, Ainsley – you needed those spare blades after all. Crap.

So, I called a nearby Tractor Supply Company, confirmed they had clipper blades, stuck JJ in his stall to take a break, and drove straight to the store… where I promptly found that they were out of my T-84 Andis blades. So, the nice sales associate helping me called a local Feed & Seed to check on their stock… and they were all out, too. Double Crap.

At this point, JJ looked like he got a haircut from a blind man with a butcher knife (bonus points if you know what horse movie that quote is in reference to!) and – although I briefly toyed with the idea of leaving him as is because I really don’t care about appearances and thought it would be funny – I knew it wasn’t fair to ask him to run a three-phase with his full winter coat still in tact.

Fortunately, there’s a small tack shop called Hamp’s nearby. It’s an absolute hidden gem and a favorite among local Atlanta equestrians. Hamp’s is known for having everything and for having great prices, too. I frantically called, and the gentleman assured me he had my blades in stock. Hamp’s to the rescue!!

I didn’t trust JJ’s woolly mammoth coat not to kill more blades quickly, so I bought FOUR. Yes, overkill. Yes, the guy (and other customers) laughed at me. Whatever. I DON’T CARE, MY HORSE IS A FUZZY MONSTER. I learned my lesson: it’s better to be over-prepared!

Anyway, long story short, Hamp’s saved the day and I was able to get JJ’s Irish clip job finished up in only about an hour. (For those keeping score, I wound up only needing ONE blade… so now I’ve got plenty of spares.) JJ was an absolute saint and stood as still as a stone the entire time I was working. He let me clip everywhere, from his belly to his man-area to his ears, without even so much as a muscle twitch. I really do have the best (most tolerant) little horsie ever. 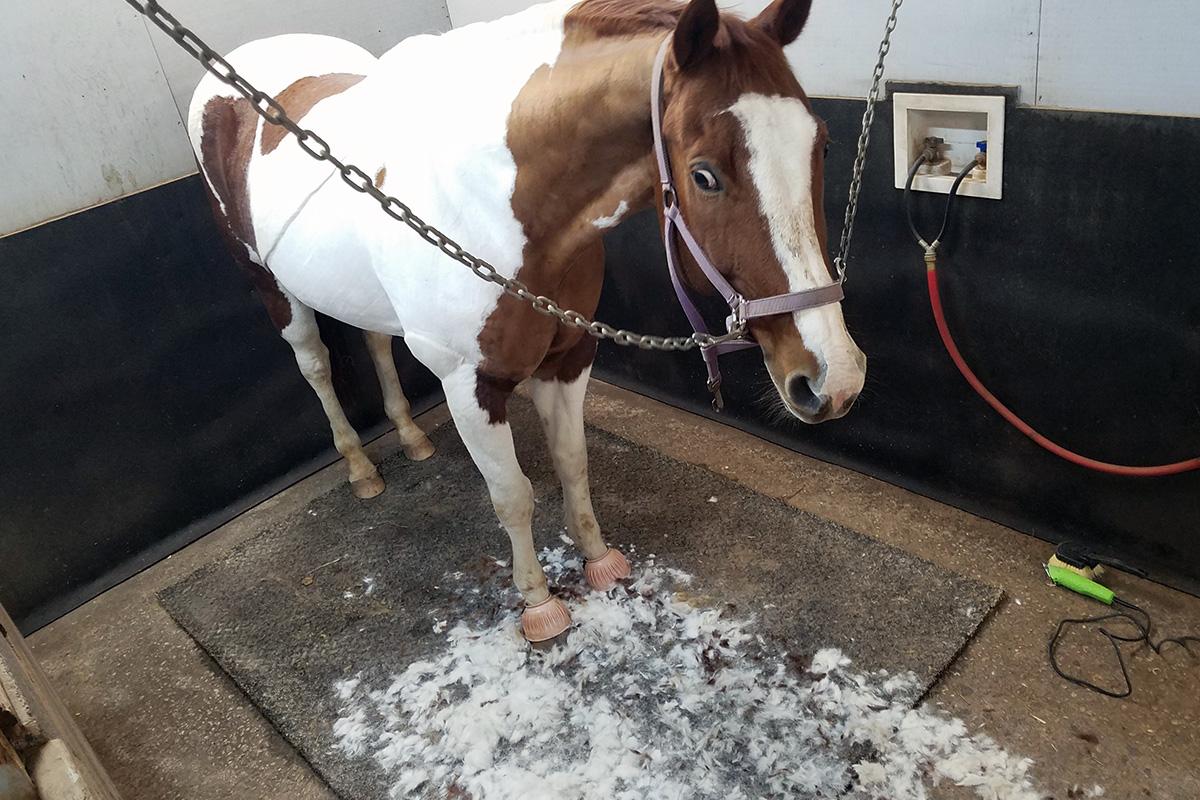 Even JJ was surprised at how much hair came off him. (Photo by Ainsley Jacobs of Ride Heels Down)

So, I’m happy to say I was able to end my clipping catastrophe by averting a crisis.

The clip job actually came out really good with practically no lines at all, and now I’m more comfortable with the idea of him competing this weekend in the humid nastiness. Fingers crossed the weather holds up!

Before you start, make sure you have spares. There’s a reason that professional body clippers exist. I am not one of them.