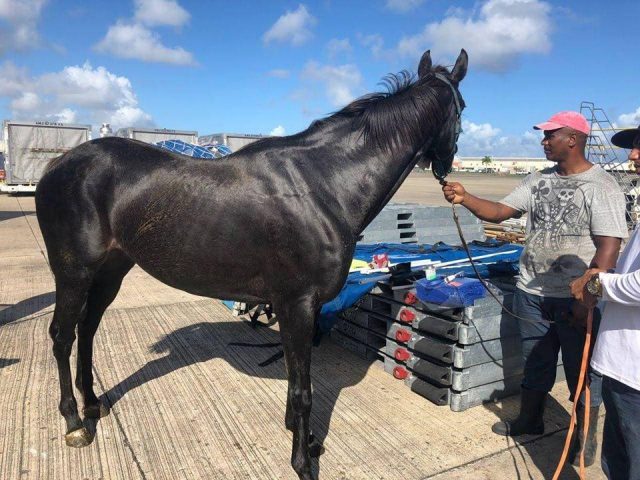 “‘Why should we spend so much money and time getting these horses out of Puerto Rico when there are so many that need homes here in the US?’ Well, these horses are from the States originally — they deserve to come back.” 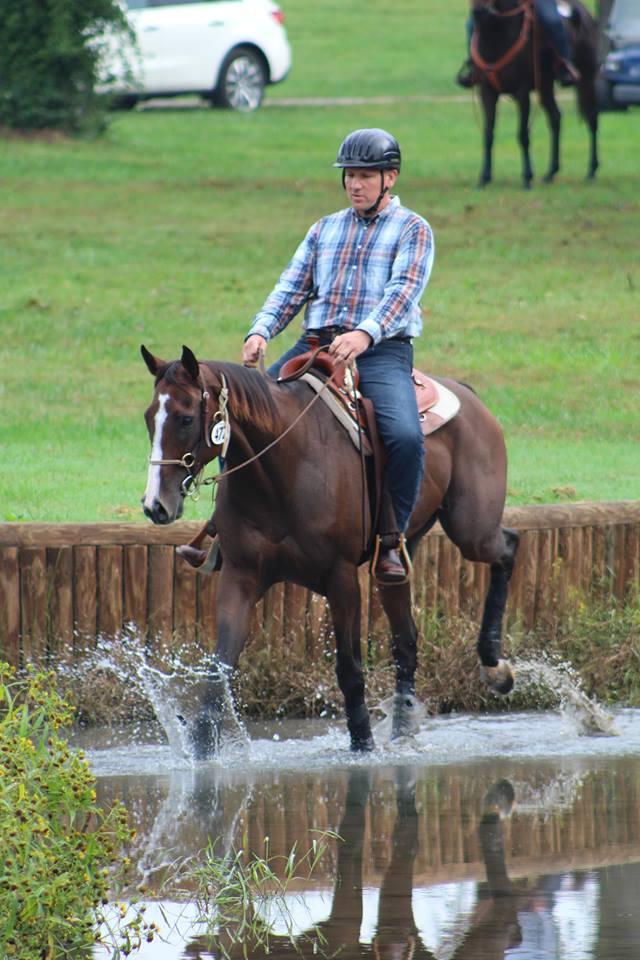 Kyle and Binky at the 2018 Thoroughbred Makeover. Photo by Susan Palmer

A bay with a dainty blaze, “Binky,” as she became known, was a 2008 Kentucky-bred by Songandaprayer who made 16 starts in the United States before the end of her three-year-old career. Fairly noncompetitive, she changed hands, shipped to Puerto Rico, and made another 80 starts for her connections through mid-2017.

Hurricanes Irma and Maria wreaked havoc on Puerto Rico in September of 2017, with the latter now recognized as the worst natural disaster to strike Puerto Rico on record. The horses at Hipódromo Camerero, Puerto Rico’s only racetrack, were not immune to the power of the storm and the widespread destruction; in the weeks following Maria, horses were left exposed to the elements — the walls on the backside remained intact, but about 90% of the barns lost their roofs, leaving metal strewn about and horses often standing in deep muck after downpours of rain. Caribbean Thoroughbred Aftercare (CTA) provided boots-on-the-ground assistance as much as possible, with eventual support from US mainland-based aftercare charities when shipments of feed and supplies could be flown in. 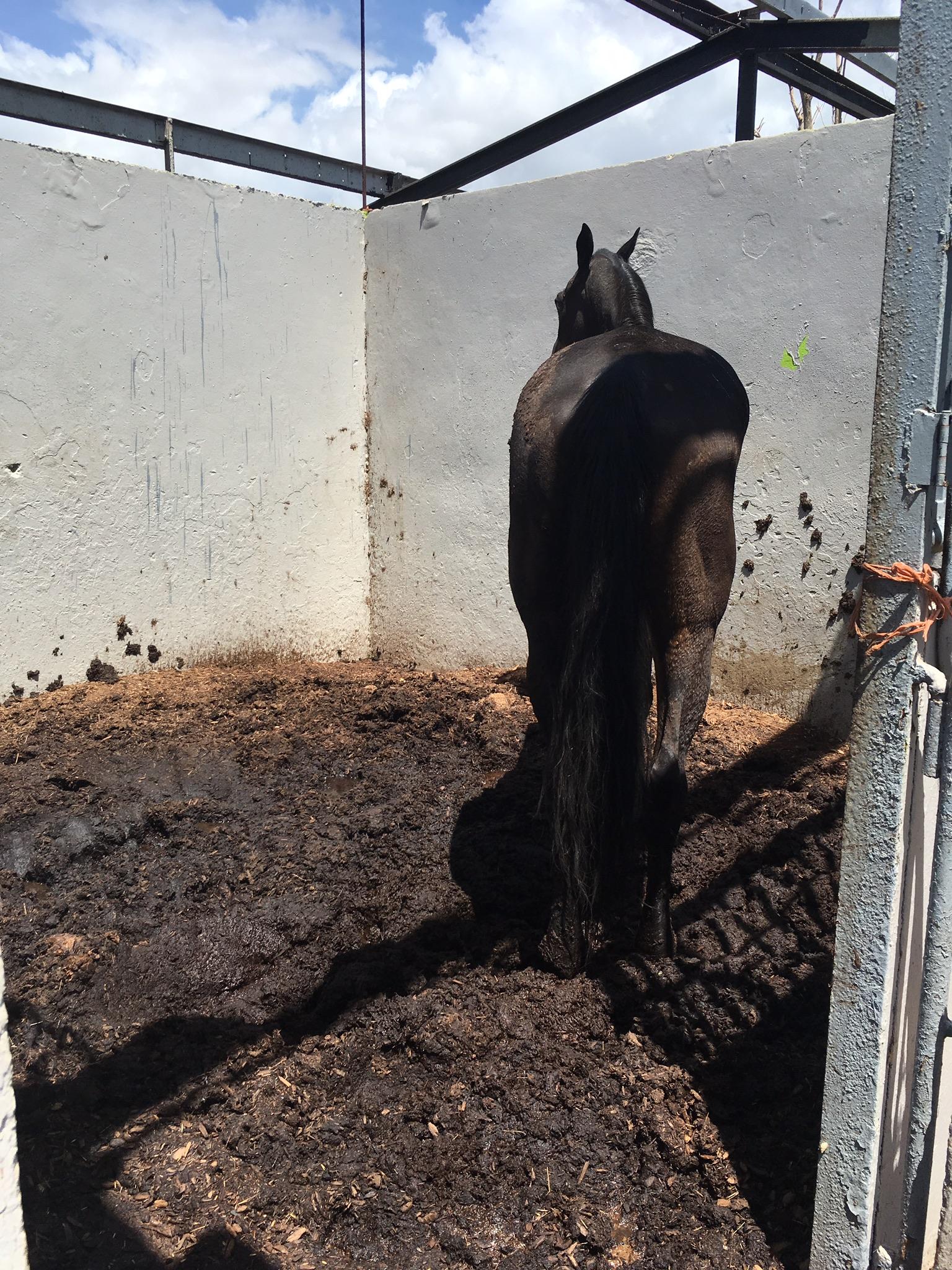 It was in these conditions that Binky foundered, as well as developed a raging case of scratches. It was believed that she would likely never be riding sound, and in fact was near death. Through the hard work of Caribbean Thoroughbred Aftercare, Binky recovered and got her second chance, flying out of Puerto Rico back to the mainland United States to RVR Horse Rescue in Florida. Rothfus adopted her and competed with her in the Retired Racehorse Project’s Thoroughbred Makeover, using the competition as a platform to raise awareness among OTTB enthusiasts about the horses of Puerto Rico, many of which started their careers just like Binky in the US.

Because Binky’s story, while an amazing triumph, is not an isolated tale — every year, as many as 150 horses ship from the mainland to Puerto Rico to race. In and of itself, this is not necessarily a bad thing, describes Kelley Stobie of Caribbean Thoroughbred Aftercare.

“We have good owners and good horsemen here,” Stobie describes. “They buy good horses at the US sales and bring them here to run. We do breed some on the island as well, and all of the native-bred horses are registered through the Jockey Club.” But what breaks Stobie’s heart are the horses that should have retired in the States and never been run again — the so-called “warhorses” with more than 50 starts, horses who weren’t competitive at the lowest levels of US racing, and even horses on the vet list at various tracks. She’s seen all of these come through the track in Puerto Rico.

“I’m not opposed to horses shipping here to race,” Stobie adds. “What I have a problem with are the old or unsound horses coming here that should have been retired.” Buyers from Puerto Rico work several angles to get trainers to sell their horses into Caribbean careers, from describing the beautiful warm weather to playing up loyalties: “With a lot of track workers originally from Puerto Rico, the buyers tell them it’s their responsibility to help the racing industry at home.”

“We don’t slaughter horses here,” Stobie is quick to point out. “But so many need to be euthanized. There’s nowhere for them to go when they’re not competitive here, and CTA simply cannot handle the numbers with limited capacity and limited funding.” Puerto Rico is only 3,500 square miles with about a 40% poverty rate, which makes placing horses within the US Caribbean difficult. “Some horses will go run in the US Virgin Islands,” Stobie continues, “but we just don’t have that much room to retire horses here. It’s an island — resources are limited.” 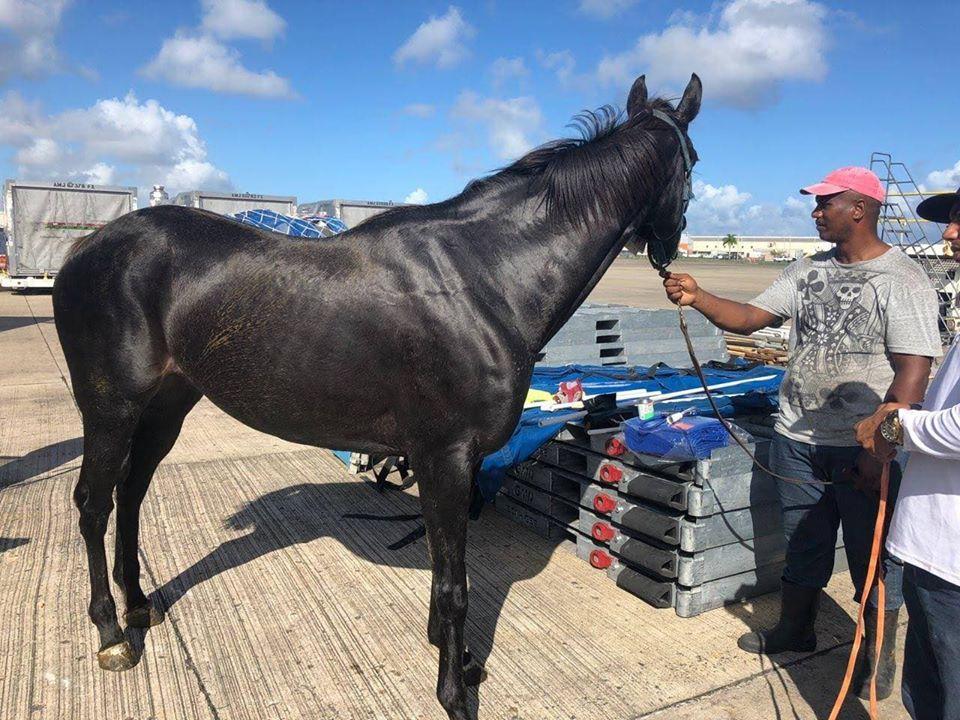 Worthy of Wings, back in the US mainland. Photo courtesy of Kyle Rothfus

Part of the problem is the expense of bringing horses back into the United States from Puerto Rico. Going into Puerto Rico, there is no quarantine requirement, but coming back into the States, horses must quarantine. It costs upwards of $3,300 to get a horse out of Puerto Rico and back into the US. Factor in that many of the horses that CTA is trying to place have health problems or limitations, combined with the number of younger, sounder horses coming off the tracks in the US ready for second careers, and the issue is compounded.

“We’ve taken a lot of negative comments,” Stobie details. “They say, ‘why should we spend so much money and time getting these horses out of Puerto Rico when there are so many that need homes here in the US?’ Well, these horses are from the States originally — they deserve to come back. Connections failed them along the way — that’s not the horses’ fault.”

Worthy of Wings unloading on the mainland:

Rothfus too has had to field his share of questions about why he’s not helping more local horses — and he refers them to his 2019 Thoroughbred Makeover hopeful, Worthy of Wings. “She was bred right here in Ohio,” Rothfus, himself based in Ohio, points out. “She ran about 90 starts in the United States and 72 of those were in Ohio.” “Worthy,” as Rothfus calls her, has more than earned her warhorse status, retiring with 138 career starts. “We owe it to these horses to bring them home.”

Worthy settling in back in Ohio. Photo by Kyle Rothfus

Rothfus again hopes to raise more awareness of Caribbean horses with Worthy. “If I can help inspire more people to choose the warhorses or the ones that might need a little rehab, fewer horses might end up needing help like Binky and Worthy. By not choosing these horses here in the United States, they were able to slip through the cracks and continue running in Puerto Rico. There’s a bigger picture I’m hoping to help people to see.” 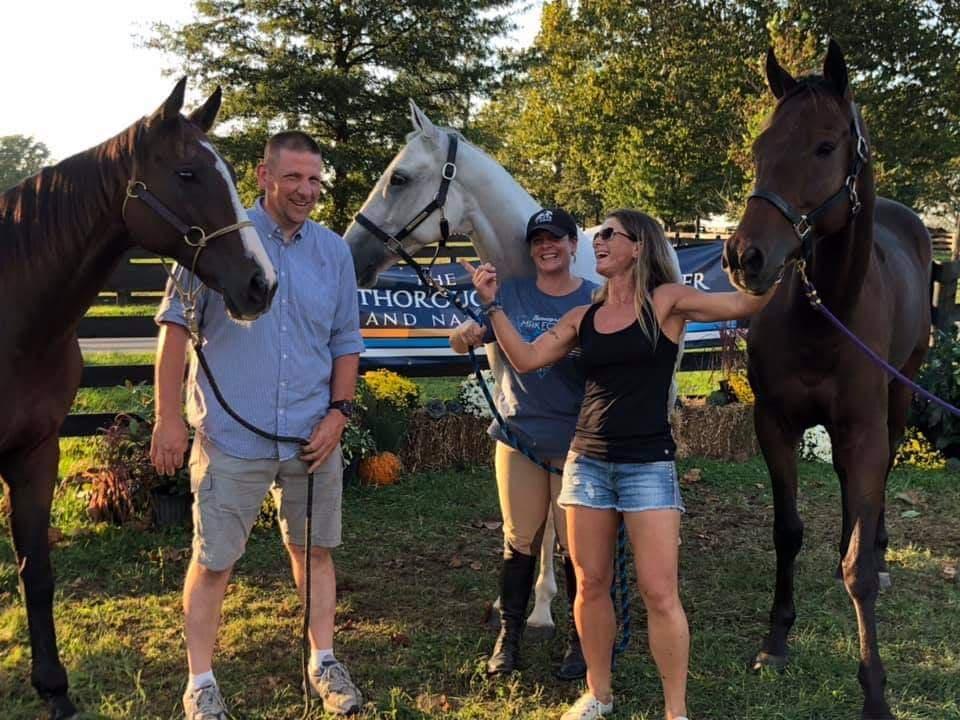 A candid moment among CTA horses at the 2018 Thoroughbred Makeover. Photo courtesy of Kyle Rothfus