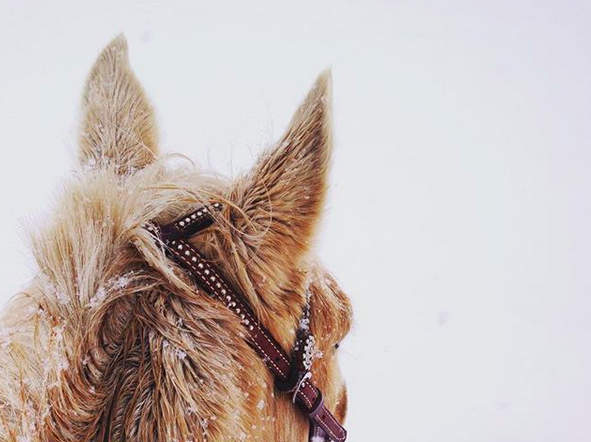 Which is good, since I live way up in the snow belt and won’t see grass again until April.

All photos by Kristen Kovatch

It’s snowing as I write this. It’s not snowing hard — in fact, if you were to just glance out the window you might not notice it was snowing at all. It’s just that few-flake sort of light flurry that we get up here in the snow belt pretty much every day of the winter until early April.

It snowed the other day too — an actual accumulating snow of a few inches or so. It wasn’t in the forecast. No one really noticed. The Great Lakes pretty much do what they want in terms of generating precipitation for those of us on the shores. This is life in the snow belt: it snows all the time, no one can predict when or how much, and it’s wonderful once you learn how to live with it.

My friends in more temperate climates were quick to send their sympathies when I first started posting beautiful photos of the farm fields and pastures blanketed in white. I appreciate their concern. What they failed to comprehend is that I find all of that snow absolutely glorious.

As my good friend told me about a year ago when she and I were the only takers for a December trail ride on a crisp winter afternoon, there’s no such thing as being too cold, just not being dressed appropriately. No, winter is not the easiest thing in the world for equestrians — but compared to my sodden November? I’ll take it. 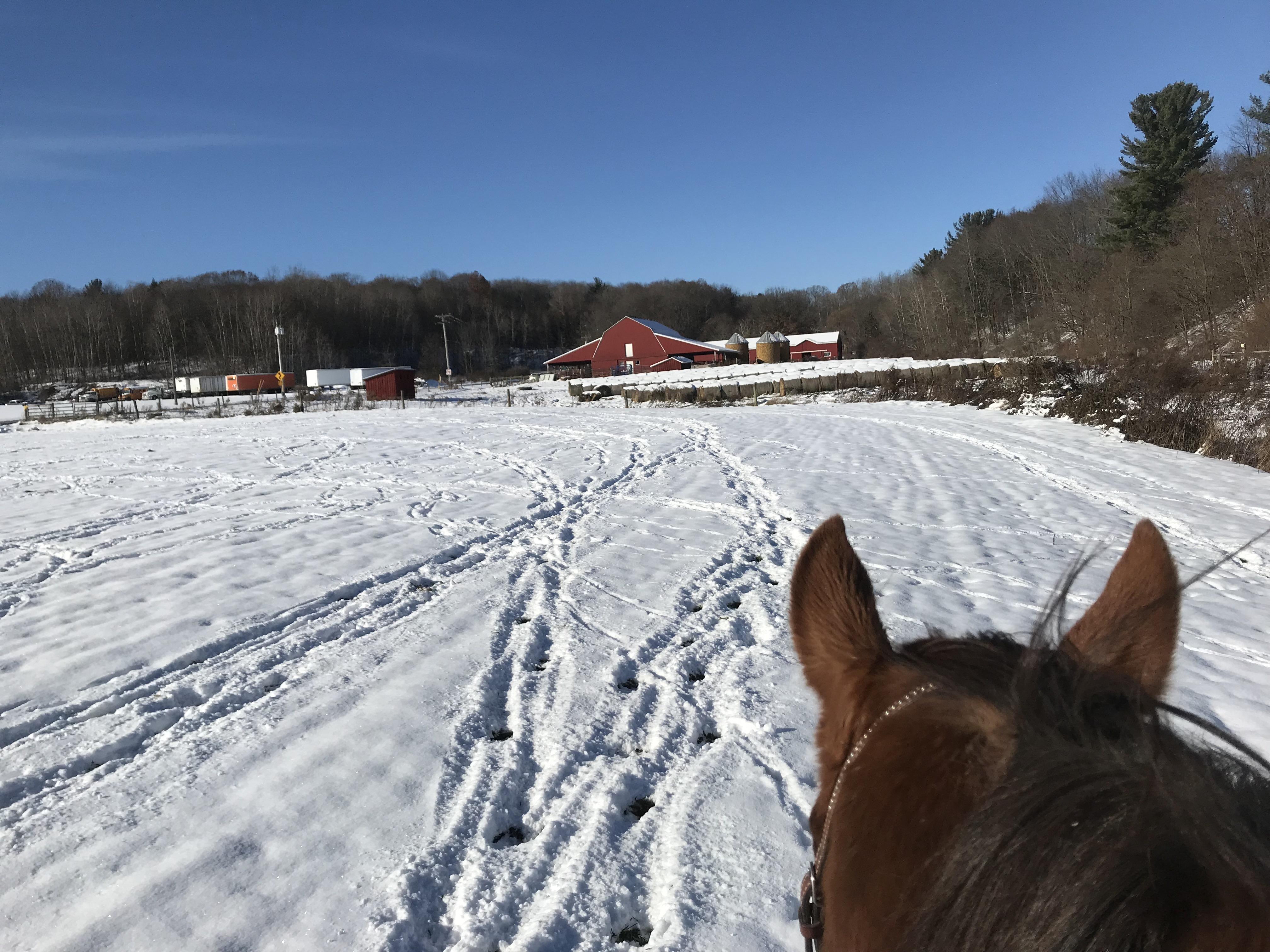 Those of you with nice footing and well-drained arenas probably don’t mind the mud, but for anyone else on #TeamNoArena with me, the mud is a deal breaker. I can’t go out tearing up winter cover crop or punching holes in next summer’s pasture… but once there’s a good base layer of snow? Game on.

2. My horses are happy living on snow.

My little herd lives out 24/7 — for the winter, they’re on a smaller sacrifice paddock/dry lot. Once the ground freezes up and we get our good snow base, they carve out their paths from hay feeder to shed to water to barn to favorite loafing areas on the few days we actually get some sunshine, and occasionally go for a heel-kicking hot lap when the mood strikes them. They cannot do these things in the mud.

Things they can do in the mud: develop thrush, develop scratches and get stocked up from standing still all the time. None of these are things I particular enjoy dealing with as a horse owner. 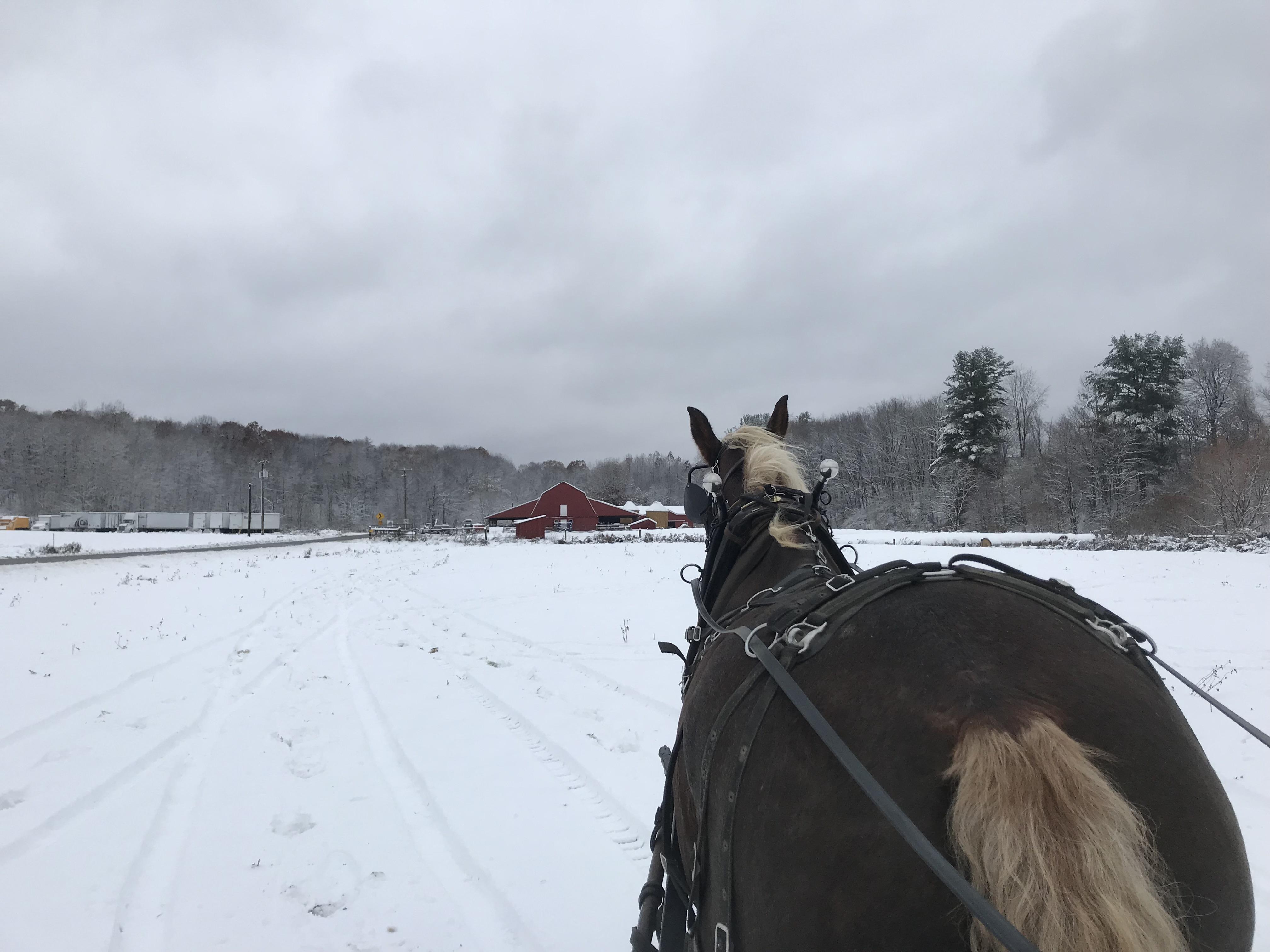 3. Riding in light snowfall is magical. Riding in a rain shower is miserable.

Okay, sure, maybe neither of these things is quite as much fun as riding when it’s dry out, but if I have to choose one or the other, of course I’m choosing the snow. With my horses’ nice thick winter coats, the snow doesn’t melt as soon as it lands on them, so I can just brush them off at the end of the ride and put their sheets back on.

4. Riding in the snow forces me to slow down and enjoy the moment.

Okay, so some of this might physically be because the snow is too deep for me to want to overexert my mount, but I spend a lot more time just walking with my horses in the winter rather than following a training regimen. This natural slow-down puts me in a more casual mindframe and a better ability to be “in the moment” — which all of us could do with while riding! My horses learn to stand quietly on a loose rein far from home while we listen to the quiet whisper of snow falling.

When you live in a place with a short summer and a long winter, summer feels rushed as though you’re trying to cram as much living into it as possible — but winter feels hopeful, like a deep breath before you leap back into hustle of warm weather.

Even the most adamant summer lover has to admit that snow-covered fields are picturesque, and all that reflected white light puts horses at their most beautiful, I am convinced. Everything looks clean and fresh in the snow, and all of that is best viewed, of course, between your horse’s ears.

Stopping by woods on a snowy evening.