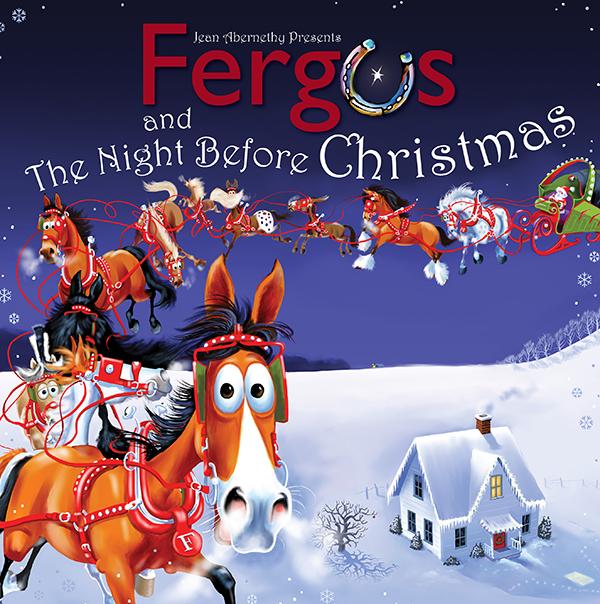 I intended to sit down with some of my summer beginning lesson students to read this book, and as always, the summer drifted into fall followed quickly by the first snowflakes of winter, and my lessons were done for the year (the perils of teaching in the snowbelt without an indoor arena).

Instead, I was reading Fergus and the Night Before Christmas solo. The book does include the age recommendation “5 to 95!” printed cheerfully right on the back cover, so I was anticipating a cute holiday tale that would make me smile and look forward to sharing with younger family members or friends.

This is also the mindset I usually have going into children’s films, which inevitably make me cry and walk away inspired to continue walking my own path (maybe with a catchy motivational song in the background). So I really shouldn’t have been surprised when the last few pages of Fergus and the Night Before Christmas brought a tear to my eye and refreshed the magic of the holidays in my heart, while also making me want to get to the barn as fast as possible and hug my own horses.

Whew! That’s rather a lot. Let’s back up for a moment.

Fergus the horse is a cartoon creation of Jean Abernethy; you’ve likely seen him before trotting across your Facebook feed with his hilarious “every horse” antics. That’s the appeal of Fergus — he’s not a particular breed, discipline or type of horse; he embodies all horses while being 100% himself. (Abernethy has declared his species to be equus hilarious.)

So when Fergus shows up leading Santa Claus’s (totally insane) 11-horse tandem, unabashedly himself with “a little hay belly”, only one shoe and his characteristic googly eyes, I couldn’t help but smile. Seemingly every type of horse is part of the 11-horse tandem, from true drafts to ponies and everything in between. Santa himself realizes his total insanity in hilarious illustration.

As Santa does his gift-giving thing, Fergus shuffles through the snow and removes the harness on a fluffy pony, turning her loose. Readers can probably see where this is going, and this is about the point my eyes started to smart. The last page has no text at all but it’s almost guaranteed to put a little Christmas joy in your heart.

So yes, that 5 to 95 recommendation is totally accurate. The rhyming text lends itself easily to being read out loud to young children, and Abernethy’s beautiful illustrations have plenty of detail to capture the attention of the very youngest. The attention to detail for horse people in particular made me smile: each of the 11 horses in the hitch is wildly different in appearance, and even without introducing them individually, the way they are illustrated reveals snippets of their personality as well.

For the young and the young at heart, Fergus and the Night Before Christmas would be the perfect holiday gift for horse lovers and budding equestrians in your family. This book, and the other Fergus books by Abernethy, are available through Trafalgar Square.