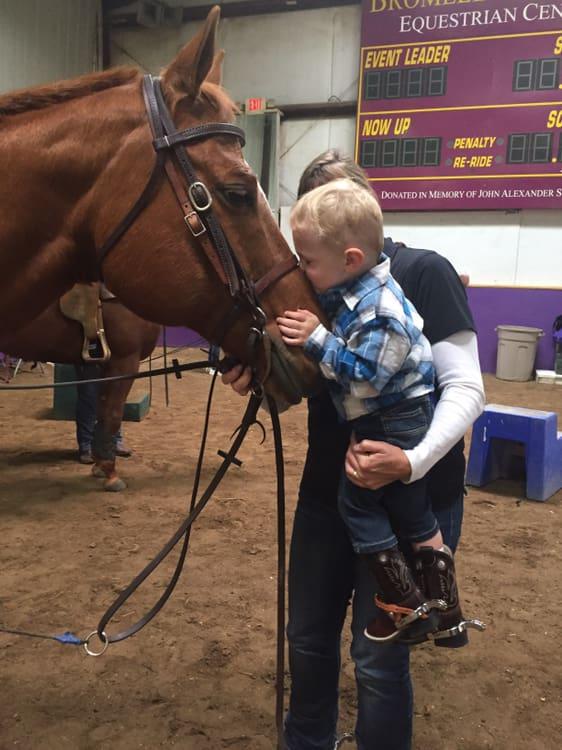 “The most difficult horses are the most rewarding.”

In horses and in people, sometimes the most memorable personalities aren’t necessarily the nicest ones. We appreciate the horses that greet us with ears up, but we grow to love the ones who are apt to pin their ears and shake their heads at us unless we produce a treat, or say their name in exactly the right tone of voice, or scratch their neck just so on the itchy spot. We bond with these troublemakers because it feels like a triumph to have made a connection with a horse who tries to take a chunk out of anyone else who walks by.

This philosophy goes for riding too — the most difficult horses are the most rewarding. Maybe we don’t ever see this in the moment, when we’re getting crowhopped around the arena on our first lesson pony, snapped at by a cinchy old lesson horse, or bounced out of the saddle by a stop we weren’t prepared for. It’s hard to be grateful for your struggles while they’re happening, and difficult to recognize our formative moments as equestrians except in hindsight. The horses we remember most are the ones who don’t willingly show their talent to every rider. They have an attitude to them that says, “I’ll only do this for you if I think you’re worthy.” And of course, as we gain experience, we understand that “worthy” means accurate in our cues, patient, and correctly positioned.

These horses are the best teachers because they expose our flaws. They tell on us with a lead change if we cross the center off balance, fling their heads up if our hands move too quickly, grind their teeth if we have too much calf pressure on their sides. Where we might at first say, “This horse is being bad today,” we learn to look at ourselves instead and ask, “What am I doing that’s making him uncomfortable?” We might be rewarded only after several rides by a few good strides where you’re perfectly in sync, but the victory of those few good strides is enough to carry you through the next several rides in hopes of increasing that number. If we’re lucky enough to stick with these difficult horses, we can look back over the span of months or years and see the places where we progressed from battling that horse to working together as a team.

One such horse I had the pleasure of knowing was Mister, a Quarter Horse loaned to Alfred University for the past several years. We recently lost Mister due to motor issues related to his advanced age, but he remains in the memory of everyone who ever practiced or showed on him. A very fancy spur-broke horse, Mister showed me how to ride a spur-broke horse by first making it very clear that I was doing it wrong — my first ride on him eight years ago in IEA was a train wreck on my part. Fast forward to my college career, and he gave me a refresher on lead changes in horsemanship patterns, showing off his ability to do angry tempi changes if my leg cues got too quick.

He was infamous for making faces at everyone who walked by his stall, pinning his ears if you so much as looked at him, earning himself a “Mr. Grumpy Gills” nickname and stall sign. At times, he let his gruff exterior drop and put his ears up for a picture. He could be stubborn, like all good old horses, but he also had an incredible amount of patience. Mister trucked middle school students around in future reining, carried my mom and my two-year-old cousin Anderson around for his first lope, and channeled all of his show-horse training and fancy buttons to show off on occasion. It takes a special horse to have such a nuanced personality, and to know without fail what each of his riders needed.

In Mister’s memory, take an extra minute to give the grouchy lesson horse at your barn some extra neck scratches and peppermints, even if you have to watch out for your fingers doing so. Take the time to find whatever it is that makes their ears go up, even if it isn’t for long, whether it be an outside graze, a scratchy spot, or the crinkle of a peppermint wrapper.