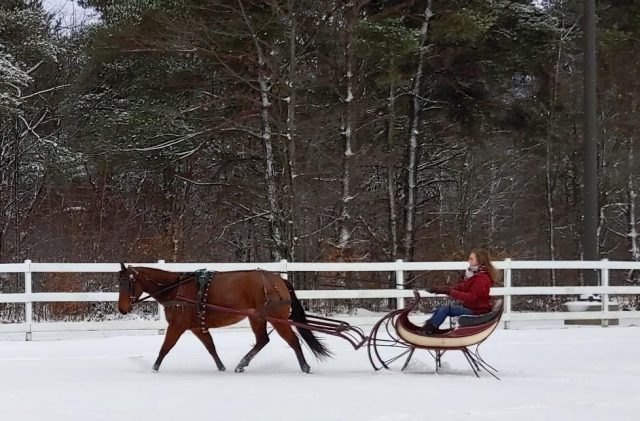 …and bring a piece of family history back to life. 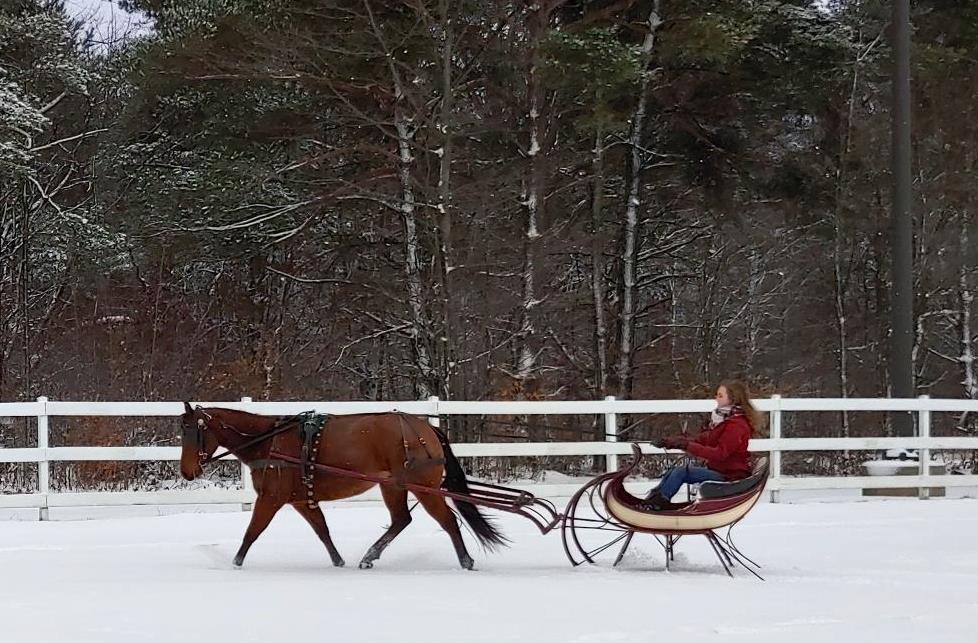 For as long as I can remember, there has been a black-and-white photograph in my tack room of my maternal grandparents sitting together in a horse-drawn sleigh. My grandfather passed away long before I was born, but the sleigh has been a fixture in my family even after he was no longer there to use it. It sat in my aunt’s house for years as a decoration, and I spent hours as a child playing on it in her living room, curled up on its seat cushion or hiding in the swell of its carpeted floor. Later, it was moved into my uncle’s basement, where it sat for years until this past weekend.

My grandfather had the sleigh refinished decades ago, painted a deep red and cream color with pinstriping and patent leather along its sides, and still it shows evidence of the care he put into it—solid construction, detailed painting unmarred by chips or scratches. When he took my grandma on winter sleigh rides, he would attach bells to the harness. The bells have hung in my parents’ house by the fireplace, unused since his death.

When my coaches and I received an email that Alfred University was planning a holiday video and wanted one of the horses to wear a set of bells, my mom encouraged us to dig out the sleigh and use our old bells for the first time since the 80s. We unearthed it from my uncle’s basement and scrubbed it clean, polished and oiled the set of bells, and brought it to Alfred. My two-year-old colt Slide hadn’t been driven since April, so I took him back to the beginning with line-driving to make sure he was still comfortable in a harness and remembered the cues. From there, we drove him in the indoor arena with a cart, and from there progressed to pulling the sleigh in the snowy outdoor arena.

I tried the bells on Slide on a lunge line at first, to make sure he had the freedom to see and hear them before he was hitched to anything. True to his general quietness and good nature, he looked back at the bells once, then trotted along as though he had worn them all his life. When we opened the overhead barn door to hitch to the sleigh, the wind almost took my coach Harry’s hat off and blew snow in our faces. It swirled in little tornadoes in the outdoor arena, and snow came down nearly sideways.

I looked to Slide to gauge his mood, to check in with him and see how his two-year-old brain would tolerate driving a sleigh for the second time in his life in the blowing snow with a videographer following him around the arena. He stood patiently in the doorway, ears up, and pushed his nose into my hand, totally unconcerned at the blizzard he was walking into. I wonder if he somehow knew, through some animal sense we don’t know about, the history of the sleigh he pulled and the bells he wore, if he could feel the echo of the horses who came before him.

Outside, I stepped into the sleigh and asked Slide to trot, the bells ringing to the cadence of his footfalls while snowflakes blew and settled in his mane. The sleigh runners sliced cleanly through the snow, cutting tracks behind us, and I know that if my grandfather was watching, he would be proud that his sleigh was out again and making an otherwise blustery and cold day magic. I had worried about Slide’s reaction to the videographer’s bulky camera, but even while Zach crouched in the snow in front of him or jogged alongside, Slide plodded along, ears up, curious and interested but never afraid. While I’m glad the venture was a success in terms of holiday video footage, what I’ll remember most is the sound of runners on snow, the snow that blanketed Slide’s back, and the steady ring of my grandfather’s sleigh bells.