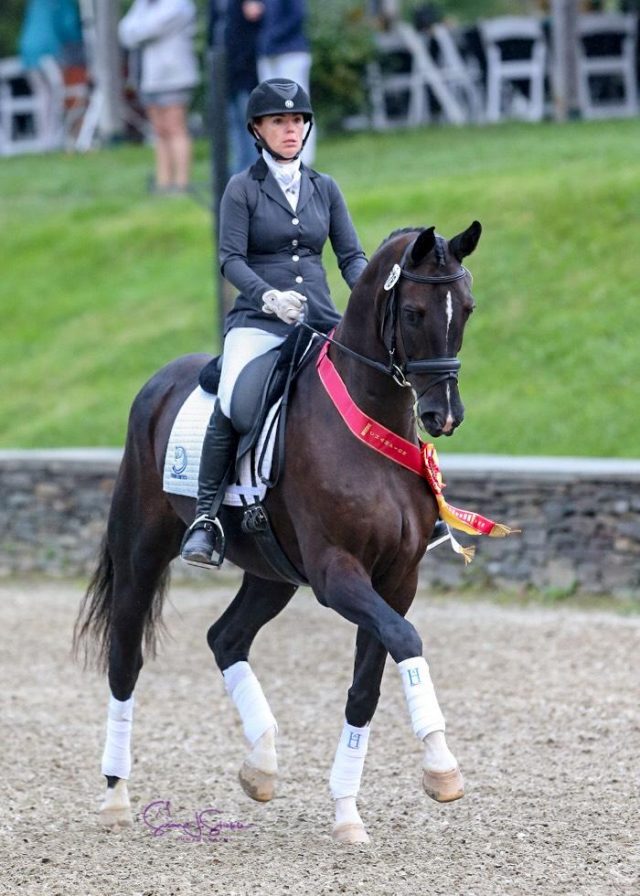 Respiratory issues are nothing to sneeze at, but top rider Amy Howard found management strategies that salvaged hopes for a top prospect. 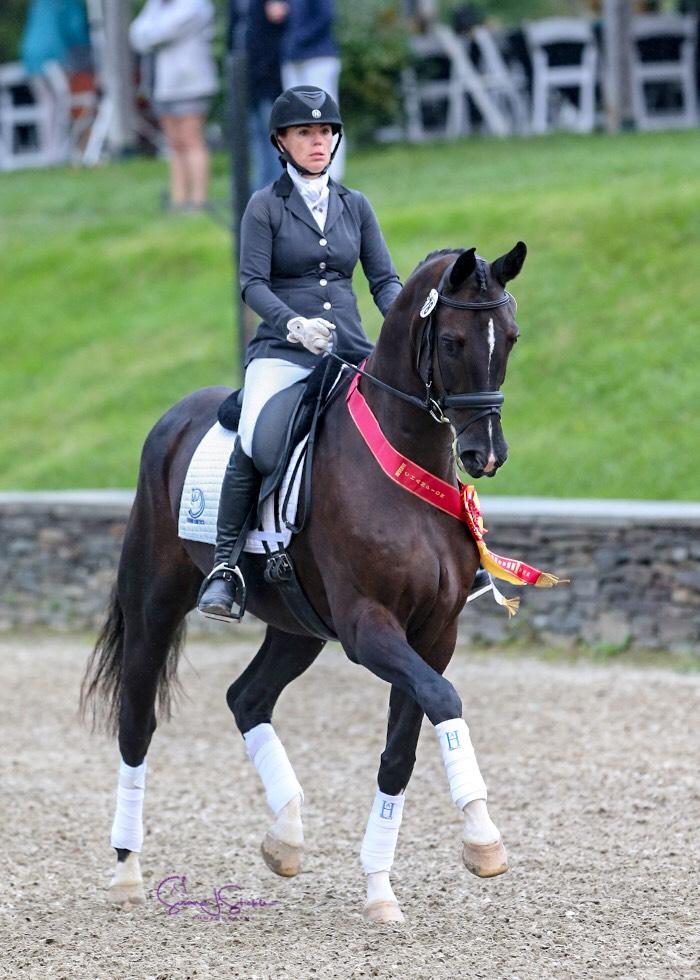 FEI dressage rider Amy Howard is better equipped than many to identify the cause of and cure for a horse health issue. The New Jersey-based professional has an equine science degree from Delaware Valley University and completed British Horse Society exams stages 1-3 during an externship with Hartpury College in Gloucester, England.

Yet when her brand new Grand Prix prospect Florelli developed a mild sneeze shortly after being imported, she was at a loss to explain it. She knew from Florelli’s breeder Marcel Timmermans that the Florencio-Sandro Hit son did not have a history of respiratory problems. Because he was new to her program, she didn’t yet have a reference for his daily normal.

Over a few months, an occasional sneeze was joined by an occasional cough – all while working. Within four months both had gradually grown so bad that Florelli could not stay in work.

That was two years ago.

Earlier this month, Amy and Florelli floated down centerline at the U.S. Dressage Finals in Kentucky to start their First Level Championships appearance. No sneezing, no coughing.  They finished sixth in the qualifying test, and had a confidence-building ride in the Final: exactly the experience Amy had hoped for with the horse who first competed only four months ago.

What happened in between was a diagnosis of Inflammatory Airway Disease for Florelli. Thanks to a BAL, a bronchoalveolar lavage of the airways and air sacs, getting a diagnosis was the easy part. “It took a considerable amount of time and support from a variety of specialists to identify a treatment and integrate that into his lifestyle,” Amy explains.

Because dressage does not entail the same level of exertion as racing or cross-country jumping, respiratory issues in general are not a common problem with common cures in this corner of the horse world. And IAD, in particular, is a “tough disease because they really don’t know the cause,” Amy explains.

“It can be a variety of things. Sometimes it can be the beginning symptoms of a virus, but Florelli never had the fever that typically accompanies that. Sometimes it’s the horse becoming more sensitive to molds, fungus and bacteria and sometimes it’s seasonal allergies.” Amy and Florelli’s veterinary team investigated all those possibilities. Only one thing was sure: “It was stressful because I was in uncharted territory when it came to how I could help him.”

As Amy shared the scenario with others, she heard indications that imported horses might be more prone to such sensitivities than horses who grew up in the States.

As Thanksgiving approaches, Amy is especially grateful to Florelli’s veterinary team led by Drs. Rodney Belgrave and Tiffany Marr Field. Along with their help, his treatment and road to recovery began with the help of two Haygain USA products. Amy credits the Flexineb Nebulizer and Haygain Steamed Hay with returning him to health and salvaging dreams for the horse “that screamed Grand Prix the first time I saw him working on a lunge line.”

The initial IAD treatment required medications and delivering them through the Flexineb made that easy and effective. Especially when compared with older, cumbersome equipment used to deliver treatment as a breathable mist. “The way it’s designed to be put on the horse is super,” Amy reports. “He was not freaked out by it and he did really well with it.” Florelli finished the medication quickly but continues to get regular saline solution via Flexineb to keep his sinuses clear.

Aware that breathable irritants in hay are a leading cause of respiratory issues, Amy had been soaking Florelli’s hay to reduce dust.  The veterinary clinic where he was treated, however, prescribed steamed hay and Florelli has been happily dining on Haygain Steamed Hay ever since.

Mold, bacteria, fungus and dust are present in even top quality hay and nearly 100 percent of them are removed by steaming. (To be specific: fungi and yeast to zero; viable bacteria by 99 percent; and respirable particles by 98 percent.) By injecting steam into a purpose-built insulated chest, the temperature of the hay inside rises to at least 212° Fahrenheit, killing living irritants and removing dust.

As with all conditions on the equine asthma spectrum, there really isn’t a cure for Inflammatory Airway Disease. It’s all about management and Amy and her team now have it totally under control for Florelli.

Amy was a tad worried about how he’d handle the 13-hour trip to Kentucky. “It was a real question how he would feel and whether his symptoms would come back due to travel, stress change of environment,” she explains. Florelli had saline nebulizer treatments on departure and arrival and ate steamed hay from a low manger all the way. (Eating with the head in a lowered position helps the horse clear airway irritants the way nature intended it to.)

As of this past spring, the pair resumed full training and went on to excel in eight shows. Along the way, they punched their ticket to Kentucky and Florelli became the USDF Region 8 Reserve Champion at First Level and ranked second nationally at that level among in the United States Dressage Federation’s Dutch Warmblood standings.

Because of the IAD-induced pause in his training, Amy brought him out at First Level. Now that he’s in full health, she anticipates being able to move up a little faster than normal. “He is super talented. When I first sat on him he was doing half-steps in the downward transition to walk. He’s my dream horse.”

She’s thrilled to be back on a path toward the top-level sport Florelli seems destined for. And, she’s even more thrilled to have returned Florelli to good health and daily well-being. “Florelli would have been forced to live out his life retired in a paddock field without Haygain’s products.”