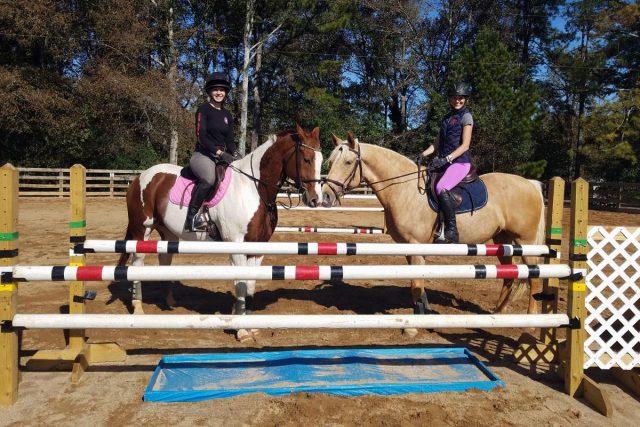 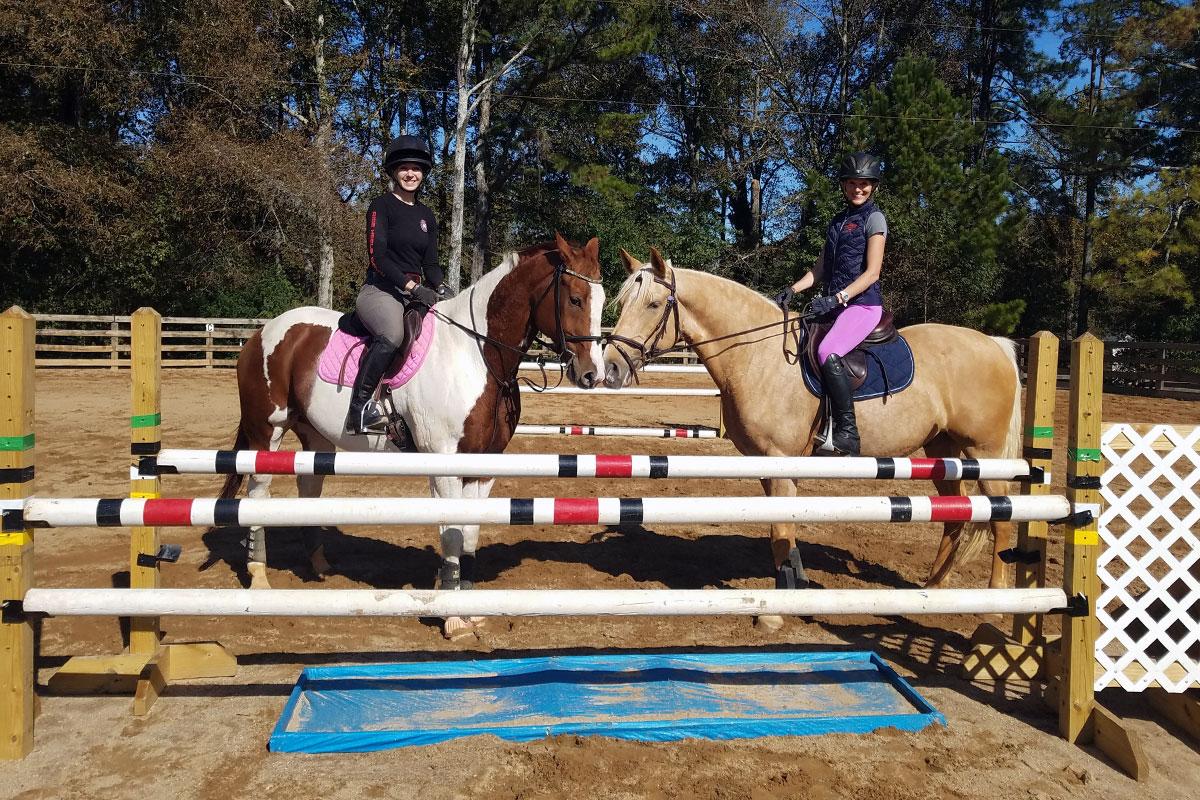 To protest having to work hard in a recent dressage lesson, JJ threw a shoe in the pasture and wound up a little gimpy. Thanks to a week of rest and some farrier heroics, he was as good as new. Today, we had our first lesson (and our first jump session) in two weeks and we definitely stepped things up a notch.

I’ve learned that if I don’t jump JJ at least once a week, he gets a little overly, uh, “excited” about things and all I can do is try to hold on and mitigate the situation. This week was no different. We started out over a low vertical and JJ was cool with it, but once the jumps went up to 2’7″ he basically just ran around like a lunatic because he was so happy to be at it again. *sigh*

Usually, once he loses his brain, I don’t get it back until the next ride. This time, though, he surprised me (he seems to be doing that a lot lately!) by getting back into “partner mode” after a couple rounds and we were able to actually be productive. Coach Lauren Turner of River Birch Farm soon raised the bar (pun intended) to 2’11” and I was so incredibly grateful to have a rideable horse again. She gave me and my lesson buddy, Mary Campbell of Mare Goods, a few different exercises and courses, and once we had ridden them all fairly well, she started moving jump cups again…

When things went up to the black tapes denoting Training height of 3’3″ all my confidence went out the door. Sure, JJ was cooperating now but would he lose his mind again with the excitement of the “big kid” jumps? I had never jumped a training course before (only individual elements) and I was NOT feeling like today was the day to push my luck by trying it.

Lauren nicely told me to put on my big girl breeches, reminded me that this was something I wanted, and told me to just jump the jumps. She was right, of course.

So, away we cantered and over the jumps we went until we had cleared all eight of them in the round. JJ rose to the occasion and was receptive to my input. Not only did we not die, but the course was surprisingly easy, too! To make sure it wasn’t a fluke, we went again – and it was even easier the second time.

I couldn’t believe it – we had survived our first legitimate Training course. From starting the lesson with a bit of insanity to trooping around Training like an old pro, JJ’s going to be getting lots of cookies and I’m going to be smiling for weeks.

…and, as I drove home, I couldn’t help but laugh as I found myself wishing that Lauren had put ’em up just one more hole higher…

Sometimes we have a brain. And sometimes we don’t. But that’s okay, ’cause I have learned to ride every “version” of JJ there is, and we are a better team because of it.