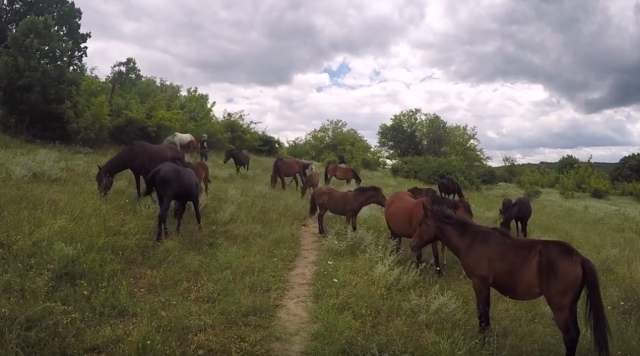 Descendants of the Tarpan horse have been reintroduced to the Rhodope Mountains in Bulgaria: learn more here from explorer Alex Mullarky!

What makes a wild horse? Technically speaking, the horse is a domesticated species. Even the horses we think of as wild – mustangs, brumbies – are officially designated as feral animals, descended from domesticated horses who escaped captivity. Przewalski’s horse is the exception, but it’s also its own subspecies of the Equus family – Equus ferus Przewalski – while all others fall under the umbrella of Equus ferus caballus.

But once upon a time, there was another subspecies: Equus ferus ferus. Known as the Tarpan, this was the wild horse that ranged across mountains, plains and steppes from Europe to Russia. Sadly, by the turn of the twentieth century the species had been hunted to extinction, and the Eurasian continent lost one of its last large herbivores.

A hundred years later, a group named Rewilding Europe is seeking to fill that gap in the ecosystem. In 2011, the group released a herd of Polish Konik horses into the Rhodope Mountains in Bulgaria – the first of many horses to return to the wild in this mountain range on the Greek border. The Konik is believed to be descended from the Tarpan, and recent research by equine anatomist Sharon May-Davis has highlighted significant anatomical differences between the Konik and the modern domesticated horse.

In 2017, I packed a rucksack and travelled to Bulgaria with my partner Lachlan to hike and camp in the ranges of these new wild horses, to find out firsthand how they were adapting to their return to the wild. Here’s my video from my travels:

Learn more about the expedition here!