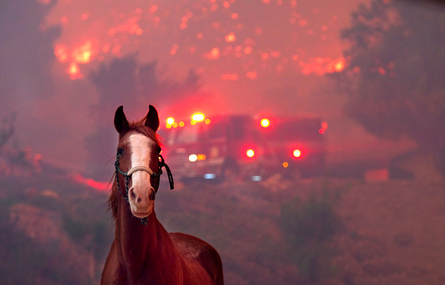 With 50 confirmed human deaths and more expected, the Camp and Woolsey Fires are leaving devastation in their wake as they blaze across California communities. Here’s how you can help fellow horse owners in need.

Raging wildfires in California have caused 50 confirmed deaths, with 48 of those coming from the Camp Fire in Butte County and two from the Woolsey Fire in southern California. The Camp Fire has virtually destroyed the town of Paradise and continues to blaze at about 35% contained.

The fires grew rapidly: the Woolsey fire grew to 35,000 acres in its first 24 hours last Thursday, and the Camp Fire grew even faster to 70,000 acres in its first day. With such dramatic speed and exponential growth, residents barely had time to evacuate. Harrowing images flooded social media from both fires: flames scorching trees on both sides of the road as people drove to safety. Animals turned loose as their best chance of survival. Horses ridden to the beach in Malibu to await pickup to safety with smoke and flames licking the sky overhead.

The Camp Fire is currently at 135,000 acres and 35% contained; the Woolsey fire is at 97,620 acres and 47% contained. Several other smaller fires are also raging in California, leaving fire-fighting resources stretched thin and evacuation efforts for both people and animals working hard. The fires are fanned by the Santa Ana winds, which blow hot, dry air east to west. Combined with dry fuel after a dry summer, conditions are right for fast-moving, devastating fires.

Details on all fires can be found at CalFire’s website, which also lists human and animal evacuation centers.

While having an evacuation plan for horses should be the first step towards keeping them safe in natural disasters, it’s not always possible due to the speed of a fire or rapidly-changing conditions. Due to the speed of the Camp Fire, there are numerous reports of horses turned loose, which can increase their chances of survival rather than being locked in a barn or small paddock. Owners forced to make that decision should mark their horses if at all possible with identification or phone number.

The full scope of devastation and damage won’t be known for some time as these fires continue to burn; it’s already believed that the death toll from the Camp Fire will continue to rise as authorities search the rubble left in the fire line’s wake. An estimated 96% of the town of Paradise burned to the ground.

How you can help:

Cash donations give organizations on the ground the flexibility to apply those funds where they are needed most.

US Equestrian Disaster Relief Fund: US Equestrian will determine where funds are best applied. In the past, US Equestrian has sent truckloads of hay to disaster-stricken areas, among other aid. Donate here

Brooke USA: As stated on the donation page, Brooke USA has yet to determine where funds will be applied but this reputable organization will find the area of most need. Donate here

Our hearts go out to all affected by California’s devastating wildfires.