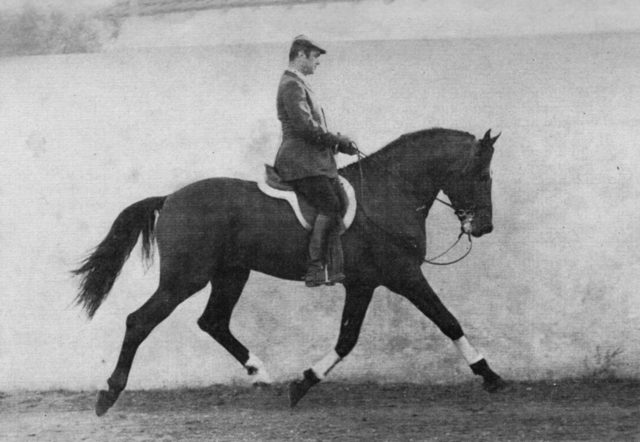 “Oliveira’s teaching was minimal and personally given. Watching was the only way for me to absorb all I craved to know… watching him over and over again.” Dominique Barbier shares a scene from an early morning watching the master in this excerpt from Riding With Oliveira. 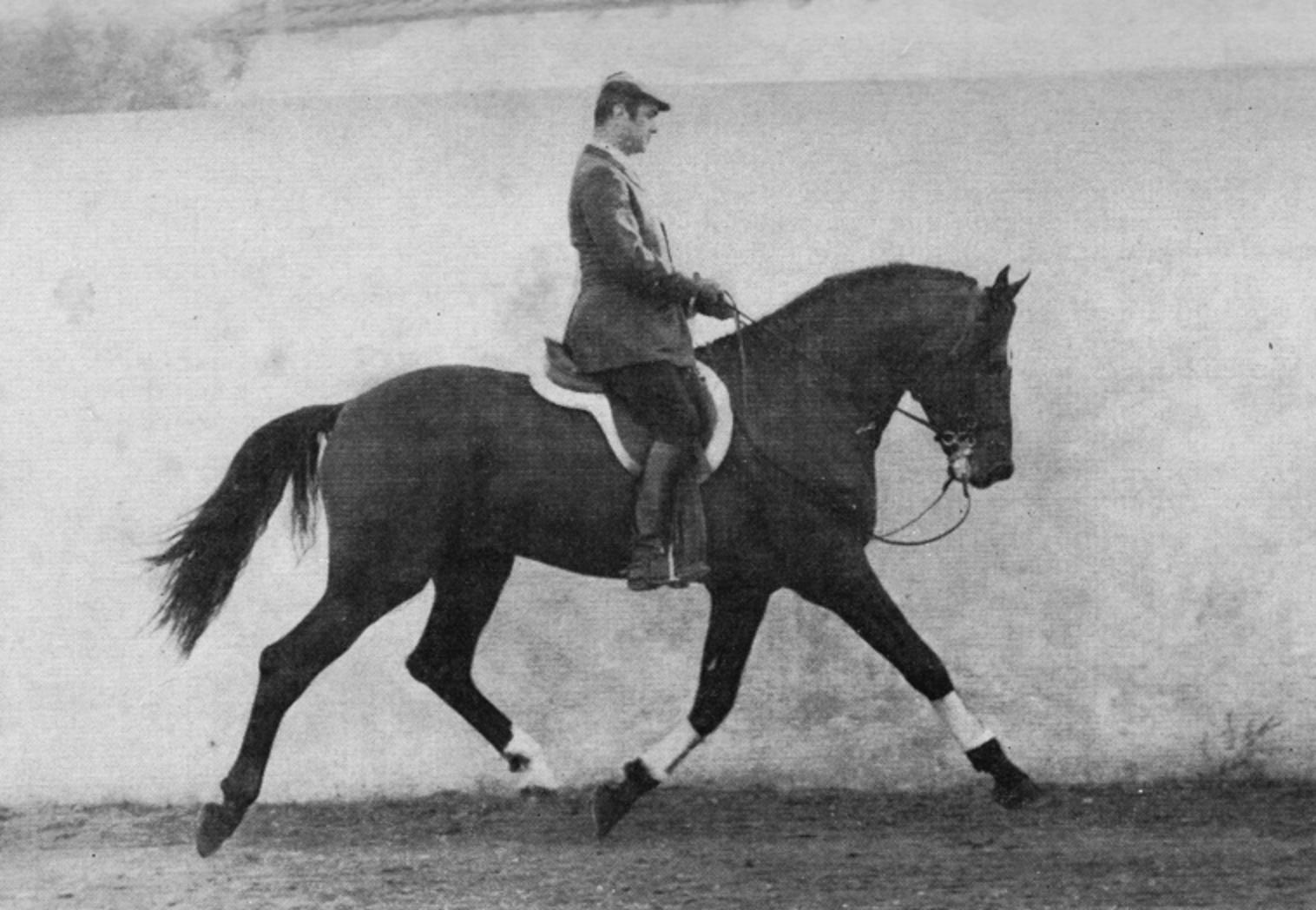 Learning that Mestre Nuno Oliveira started riding at half past four each morning, of course I went the very first day. The wooden stairs up to the gallery overlooking the picadeiro squeaked, and the door was even worse. There was no way to be invisible. I will remember all my life the big eyes he turned on me—a mixture of, “What are you doing?” and “I am happy someone is here.” He loved an audience, and I can relate to that.

At 11:00 a.m. the students rode, then we had lunch, then the Mestre rode three more horses in the afternoon, after which we had a group lesson. But my favorite time by far was half past four in the morning, cold, silent, and alone. Just the Mestre, a horse, and me in a very small place. It was delicious.

I could not wait for each morning. Watching Mestre Oliveira was surreal. He was a big man. Meeting him in the street you could not know that he was the finest écuyer in the world. He reminded me of Jean-Pierre Rampal, the famous French flautist—a very large man playing the lightest flute in the world.

Oliveira’s teaching was minimal and personally given. Watching was the only way for me to absorb all I craved to know… watching him over and over again. I recall living (and learning) by being him many times over. Not watching but being him. Riding and living through him almost “molecularly.” This instinct was so strong it fascinated me. Many times I thought about it and concentrated on making it work for me even better. The more I practiced this technique of watching and learning by being, the sooner I found refinement of my objective—improvement of my ability on horseback. Over the years I have developed many techniques based on this understanding and practice. My hours and hours of watching the Mestre at work have become even more important to me, if that is possible. Then I was absolutely intent on observing and using every nuance I could discern. And the more I watched that big man on a horse, the more I saw, and the more I felt. And the more I felt, the more I could transmit to my own horses.

Ten days after my arrival in Póvoa de Santo Adrião, the Mestre gave me the experience of my life. It was early in the morning, and I had my notebook in my pocket (what would one day become my book Dressage for the New Age). The Mestre was riding a great big gray horse belonging to a banker. The horse had sinking hips because of an accident early in his life, and only the Mestre rode him. Halfway through the session he stopped and called out, looking up at me, alone in the gallery, “You! Come down! ”

My heart was pounding as I very quickly went down the creaky stairs in my street clothes: English jacket (you cannot ride without it in England) and Italian shoes. He asked me to mount the gray and canter on the circle to the right. You must understand, the picadeiro was very small, just the size of two longeing circles. So this horse was cantering around, and the Mestre said, “Descente de main, descente de jambes.”

I knew: lower my hands and legs. Then he said, “Reins at the buckle.” I could do that, too. Next he instructed: “Lengthen the canter down the long side and circle again.” I loosened my back to lengthen the stride and the horse lengthened five or six strides. But then he announced, “Collect your horse! ”

The gray was already going too fast and I had no contact with his mouth; therefore, I instinctually went to pick up the reins.

“Oh no!” the Mestre bellowed.

Panic! What should I do?

I thought about leaning back and “growing taller” in the saddle, and as I did I felt that incredible moment when the big horse came back to me, just with my brain sending him an image and my back growing taller.

He rounded and collected beneath me without the reins. It was the epiphany of my life. I knew at that moment what I wanted to do with my horses and what I had to teach to others. It was a very powerful lesson.

Mestre Oliveira told me to dismount and that was it. But it was one very early morning in Portugal that has never been forgotten and instead formed the very foundation for my riding and teaching in my lifetime ahead.

An excerpt from Riding with Oliveira by Dominique Barbier & Keron Psillas, reprinted with permission from Trafalgar Square Books (www.horseandriderbooks.com). 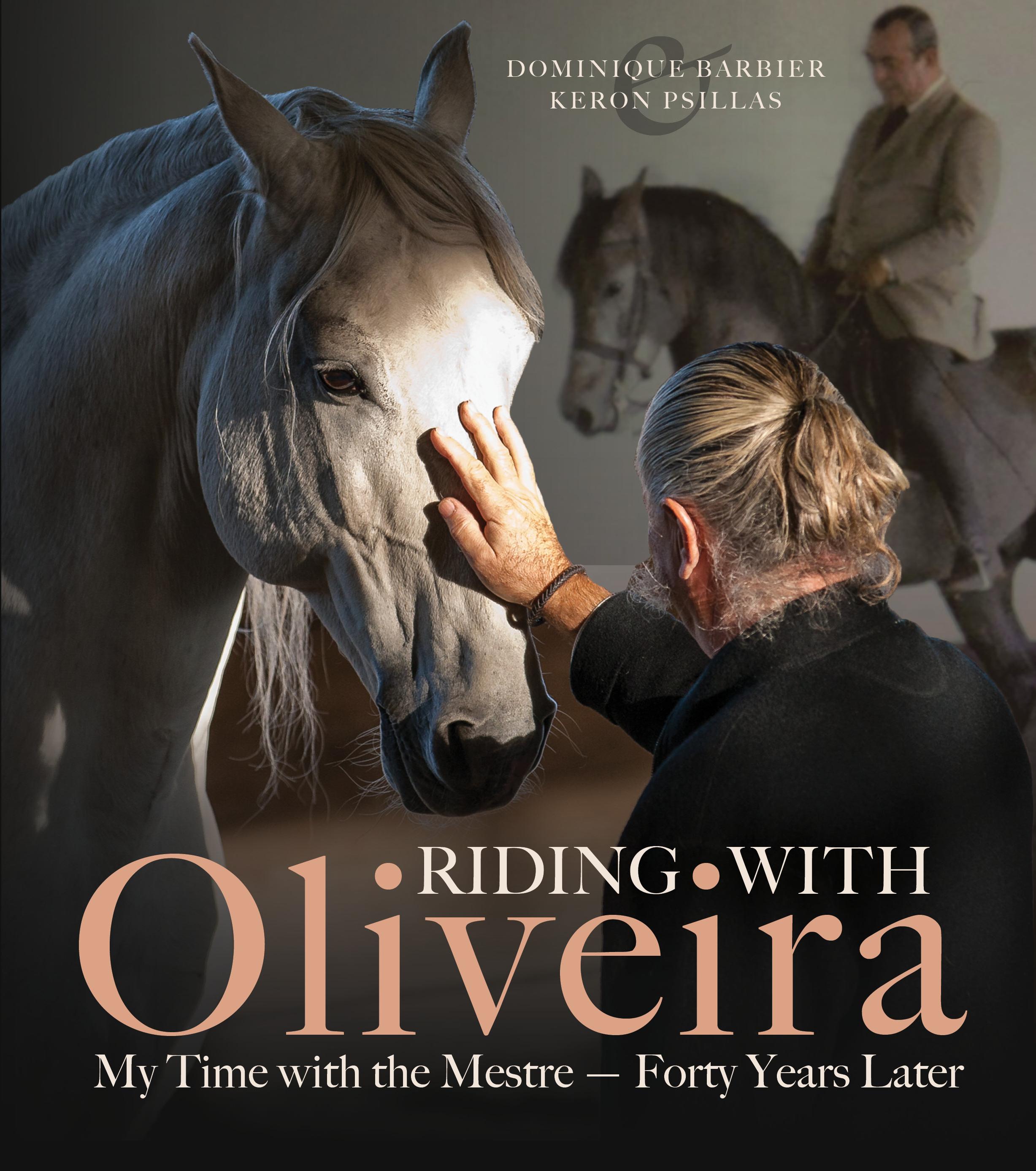