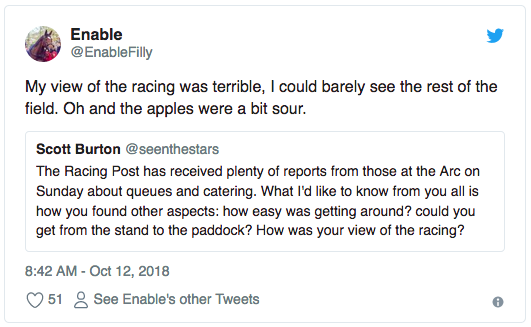 Whoever is responsible for this deserves a gold star.

At a dark time in our internet life in which Twitter is basically used to shame each other, get into political arguments and watch world leaders spend an inordinate amount of time twiddling their thumbs over the keys, Enable, the heavy favorite for tomorrow’s Breeders’ Cup Turf and two-time winner of the Prix de l’Arc de Triomphe, parted the clouds and brought the sunshine with a Twitter feed so pointedly funny it deserves its own segment on late-night talk shows.

If you’re a new passenger on the Enable Train, here’s a brief list of her accomplishments:

The four-year-old British filly is now on American soil to contest tomorrow’s $4,000,000 Breeders’ Cup Turf. She’s the 1-1 favorite as of press time.

And boy, is she here for it.

Thanks @BreedersCup for doing what everyone else in racing already does. Follows me

Apparently Mr Gosden has been on television saying I will tell him when I’m ready. Like I’m some sort of bossy boots

We have no idea what cheeky human is responsible for this, but we’re loving it.

Fillies can be such gossips. This is what I heard on the gallops this morning.
OMG did you hear about Alpha Centauri
Yes she’s leaving school
I heard she’s pregnant
I heard that too, by Saxon Warrior
That’s why he’s leaving too

My view of the racing was terrible, I could barely see the rest of the field. Oh and the apples were a bit sour. https://t.co/JcZR5b2Ibf

And now that Enable is settled in at Churchill, it’s only getting better.

Bit disappointing so far. It said in the brochure there would be blue grass

It’s amazing that those giant hooves can push those keys so accurately. We can’t wait to see what Enable does next… either on Twitter, or in tomorrow’s Turf!