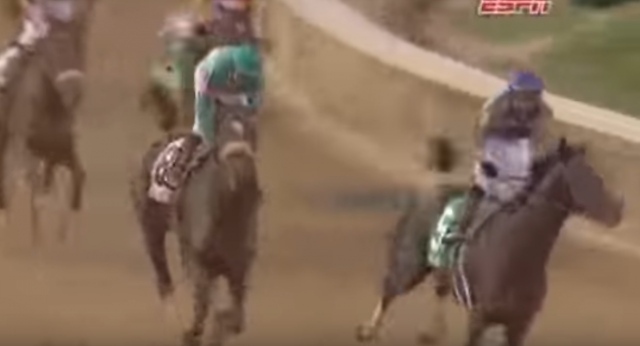 With the Breeders’ Cup just days away, it’s time to revisit this most infamous Breeders’ Cup Classic — Zenyatta’s only career defeat, by the aptly-named Blame.

There are certain moments in horse racing that will never be forgotten, and certain defeats that still carry their own unique sense of glory and honor. One such infamous race is the 2010 Breeders’ Cup Classic — the only career defeat of the great mare Zenyatta, at the hands of a colt with the perfect trip named Blame.

Zenyatta was poised for a perfect career to conclude with what everyone expected would be a victory in the Classic, and truly most seemed to agree that she was still the best horse out there in field. Settling well out of the race for the first half, Zenyatta was at times eighteen lengths or more from the leading pack, cruising all alone way in the back of the field.

In the turn for home, however, Zenyatta gave her trademark rally as the crowd roared, jockey Mike Smith having to pick his way carefully through the collapsing field to find running room. As she accelerated in a true feat of athleticism, the colt Blame put away his competition and shook clear of the field.

Together these two drove for the wire, Zenyatta gaining with every stride — but just moments too late, as the pair flashed under the wire with Blame a nose in front.

Mike Smith took the responsibility of the defeat after the race, commenting that if he could do things differently, he might have sent Zenyatta sooner or kept her closer to the leaders. Hindsight is always 20/20, of course, and we’ll never know if this race would have played out any differently.

Do horses understand defeat? Zenyatta battled every inch of the way to the wire, and in her mind, perhaps, she had still won the day in whatever way horses understand. In the hearts of her fans, Zenyatta will always be queen.

What new stories and rivalries and memorable moments will come out of this year’s Breeders’ Cup? We’ll have to wait and see!