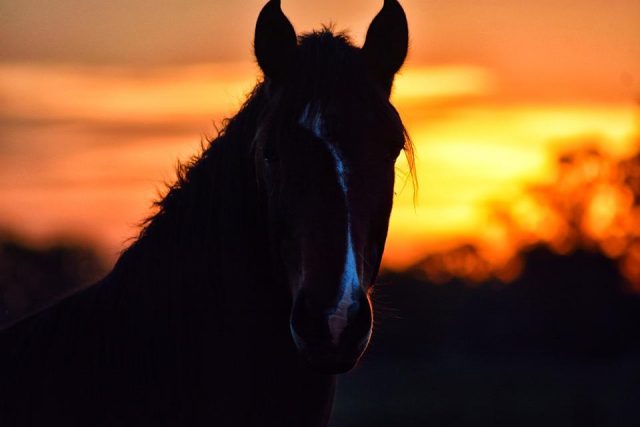 Introducing one of the winners of this year’s Halloween short story contest: Alycia Skye, and her delightfully ominous tale, “The Omen Horse”! 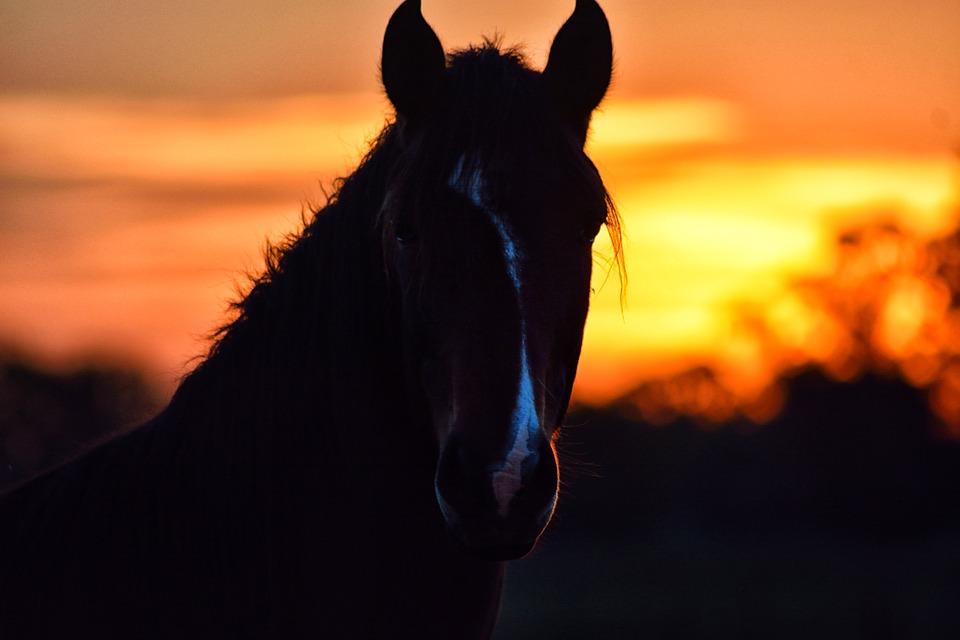 Dollie passed an almost full glass of light colored beer between her hands, sliding it on the smooth wooden counter. She was lost in her own mind trying to piece together a million racing thoughts in the dimly lit quiet bar. The bar had an eerie vibe to it especially since Dollie was the only customer here tonight.

“Penny for your thoughts?”

“Hm?” Dollie responded half-heartedly to the bartender, a bald man with sad deep-set grey eyes, a gaunt face and dressed in a brown long sleeve shirt and jeans. The old man finished wiping his hands on a white towel and tossed it over his shoulder.

“Let me guess, guy trouble. It’s always guy trouble.” Dollie glanced up at the man with her dark brown eyes. He had crossed his arms on the counter and leaned forward. His name tag read Walter.

“I wish. That would be so much easier.” Dollie pulled her blue knit sweater sleeves over her hands and rested her elbows on the counter.

“Well, what is it then?” Walter encouraged.

“There is this property that I am looking at…”

“The one at the end of Douglas Lane?” Walter interrupted.

“You walked in dressed in breeches and boots and it’s the only barn for sale in this miserable town.”

“Yeah, with my grandfather’s inheritance I can finally open my own lesson barn…” Dollie said with a sigh.

Walter looked at her sideways. “You can barely call that run down structure a barn. The slightest gust of wind and it will topple right over.”

“That’s one of the problems.” Dollie mumbled.

“If you can fix it — and by fix it I mean plow it down and rebuild — I think it would be good, having a place for the kids to go play. They got nothin’ for them here. You need to watch your back though.” Walter warned.

“You haven’t heard?” Walter asked and Dollie shook her head no. “It’s got a proper ghost story to it.”

“Oh please, those are just some rumors from bored teenagers who have been trespassing to throw parties.” Dollie rolled her eyes.

“No, it is not a rumor.” Walter walked around the bar and took a seat beside Dollie. “For years that barn has been plagued by the Omen Horse: a creature who is part shadow and part skeleton, all black except for one half of his face that is exposed skull. It is said that anyone who sees the Omen Horse will experience bad luck and misfortune.”

“So this is the place than? Nothing much to see.” Eddie, Dollie’s fiancé, said, peering out of the pickup truck’s windshield.

“It comes with a ghost.”

“I figure it’s probably just some wolf,” Dollie said as she climbed down from the truck. She started to head through the overgrown knee-high grass and weeds to get to the dilapidated barn that sort of leaned to the left, with Eddie in tow. Dollie questioned for a moment if it was even sane to enter the barn with its peeling, fading red and white paint. Curiosity pushed away the fear and doubt and she and Eddie heaved with all of their strength on the heavy door, unsealing the barn for the first time in years. It squealed in protest as it slid on its rusty tracks.

Inside the barn everything was covered in a thick layer of dust and cobwebs and most of the dark weathered wood structure looked like it was close to caving in. Across the aisle way was a door labeled office and she headed in. The first things to catch Dollie’s eyes were the old faded pictures and faded ribbons covering most of the dirty white painted walls.

“Hey Eddie, come here!” Dollie called out, walking around a simple wooden table covered in aged stained paper. She grabbed one of the pictures so yellowed with time off the wall.

“What’s up?” Eddie walked up behind Dollie, placing a hand on her shoulder.

“This is Walter, that bartender I was telling you about.” Dollie placed a finger on a not-much-younger looking but happier Walter holding a lead rope that was attached to a chubby medium black pony. Sitting on the pony tacked in an English saddle was a little girl gleaming with joy holding a trophy high over her head.

Dollie entered the bar which was much more crowded and lively than the other night. Picture in hand, she walked over to the counter and took the only seat available.

“What can I getcha?” A tall young man with shaggy brown hair and a beard asked while pouring out a drink for a nearby customer.

“Actually I was wondering when Walter was working next. I have some questions I wanted to ask him.”

“The man in this picture.” Dollie held up the framed photo for him.

“Walter has been dead for five… no, six years.” Dollie went cold. The bartender asked, “Are you okay? You look like you’ve seen a ghost.”

“So you really think this is a good idea?” Eddied asked, turning on a flashlight, scanning the surrounding forest with its spotlight.

“We are about to be owners of this place so we should see what this ‘Omen Horse’ is all about,” Dollie said, walking towards one of the paddocks. She climbed up on the rickety fence, took a seat, and turned off her flashlight. She glanced up at the crystal clear starry night. She had so many plans for this place, she could hardly wait. For years, Dollie had been traveling from barn to barn to teach her lessons, on random horses she never got a chance to bond with. Eddie climbed up and took a seat next to Dollie. He proceeded to take her hand and squeezed.

There was a rustle in the tall grass and Eddie was quick to place his finger on the switch of his flashlight.

“Don’t.” Dollie whispered, covering Eddie’s hand to stop him. A shadowy figure moved quickly left and then to the right. It’s got to be a wolf, right?, Dollie told herself as her heart rate quickened. As the small black mass, with its white skull exposed on one side of its face glowing in the moonlight, stood looking at them in the middle of the paddock, Dollie wondered if the Omen Horse was real.

“Okay… now can I turn on my flashlight?” Eddie demanded.

“Shush.” Dollie had a hunch about this so called Omen Horse. Moving slowly as to not make too much noise, she took off her backpack and rummaged inside until she found what she was looking for. She placed a broken-up granola bar on her hand and reached out. As the Omen Horse approached, its shadowy figure looming closer in the darkness, it greedily ate up the granola, tickling Dollie’s hand with its long whiskers. Dollie began to stroke what felt like fluffy fur. Turning on her flashlight she could see the pony’s two toned face, one side pure black, the other a bright white.

“So scary.” Dollie laughed at the fact that this cute little thing caused so much panic in the small town.

“Isn’t this the pony in the picture with Walter?” Eddie questioned with relief in his voice.

“For sure. He must have gotten left behind somehow.”

Dollie untacked Omen and waved goodbye to the little girl who just finished her lesson. Dollie smiled with joy as she watched her student skip away towards her father who was waiting for her at the end of the newly built barn — it had been a long year of hard work since that fateful night. Dollie gave Omen a broken-up granola bar, unclipped the cross ties, letting them swing to the wall with a clang, and turned to walk the pony back to his paddock.

She stopped dead in her tracks. A bald man with sad deep-set grey eyes, dressed in a brown long sleeve shirt and jeans stood in the aisle.

“Thanks for taking care of my pony,” Walter said as a smile lit up his face; his eyes no longer looking sad but instead sparkling with pride. He took one last look at the pony, who had nickered softly seeming to recognize his old owner. Walter turned and walked out of the barn without another word. Dollie was quick to follow, dragging the pony behind her. As she stepped out of the barn she scanned the property, only to see her horses in the paddocks. Dollie was the last and only person at the barn as dusk fell.