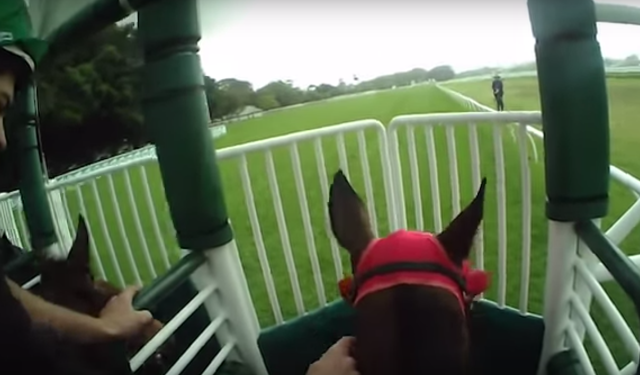 Australian sprinter Redzel nabbed his second win in the Everest, Australia’s richest horse race, to become the second highest earner in Australia for all time. Ride along for the win with jockey Kerrin McEvoy!

Sometimes, race strategy is simple: get to the lead and stay there. That was the winning formula for Redzel in Australia’s richest horse race, the Everest, contested over 1200 meters on Randwick Racecourse’s turf track in Sydney. With a purse of $13 million, it’s the richest turf race in the world.

This year, the Everest ran on October 13 — a rainy, boggy day at Randwick, rendering the track soft. That didn’t curb any of Redzel’s powerful run, however, as jockey Kerrin McEvoy hustled him right to the lead out of the rail gate position, never looking back and never relinquishing that lead.

From a different perspective, you can see just how much the field was breathing down Redzel’s heels:

The Everest runs much like the Pegasus World Cup in the US, with starting slots sold to interested owners who then can fill the slot with their own horse, lease or contract another starter or sell the slot outright.

Redzel is a six-year-old gelding by Snitzel, trained by Peter and Paul Snowden. This latest victory pushes his career earnings to AU$15.37 million.