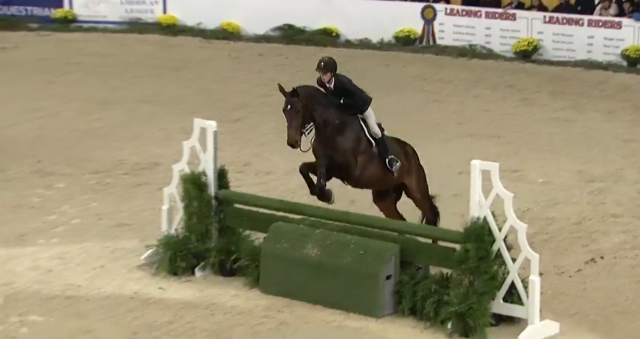 The 2018 Dover Saddlery/USEF Hunter Seat Medal Final at the Pennsylvania National Horse Show concluded in impressive fashion with a real test — watch Brian Moggre aboard Efendi show why he was named the winner!

The USEF Hunter Seat Medal is one of the crowning achievements for equitation riders in the United States: past winners have gone on to international careers riding for the nation, training professionally and achieving real legend status. Winners establish themselves as potential future stars of the sport, marking themselves as individuals to watch in the coming years as they work their way up the levels.

Brian Moggre of Flower Mound, Texas became the latest such rider to set himself apart from the crowd: aboard Efendi, Moggre took the 2018 Dover Saddlery/USEF Hunter Seat Medal Final at the Pennsylvania National Horse Show, demonstrating in the six-rider final test just why he should earn top honors.

A full class of 238 riders narrowed from the first round to just the 25 best in the second; the top six then came back to the ring to demonstrate their equitation over a challenging test that included lead changes, counter canter, hand gallop, halt and sitting trot. Moggre elevated equitation to an art form with his performance that appeared completely effortless:

Say hello to your 2018 @DoverSaddleryUS USEF Hunter Seat Medal Final Champion!! Brian Moggre delivered when it mattered most in the nail biting final test aboard Efendi who was crowned Best Equitation Horse!

Moggre wasn’t the only winner: his mount Efendi, owned by Don Stewart, was named the Best Equitation Horse.