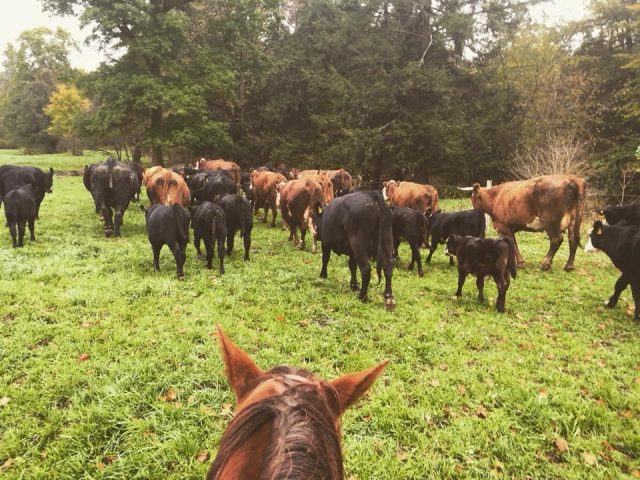 “I don’t think of myself as an un-confident person. But someone tells me I’m a ‘cowgirl’? I immediately feel the need to correct them. I am certain upon meeting real ranchers that they can sense I’m a total fraud — just an East Coaster who happens to ride in a cow pasture.” 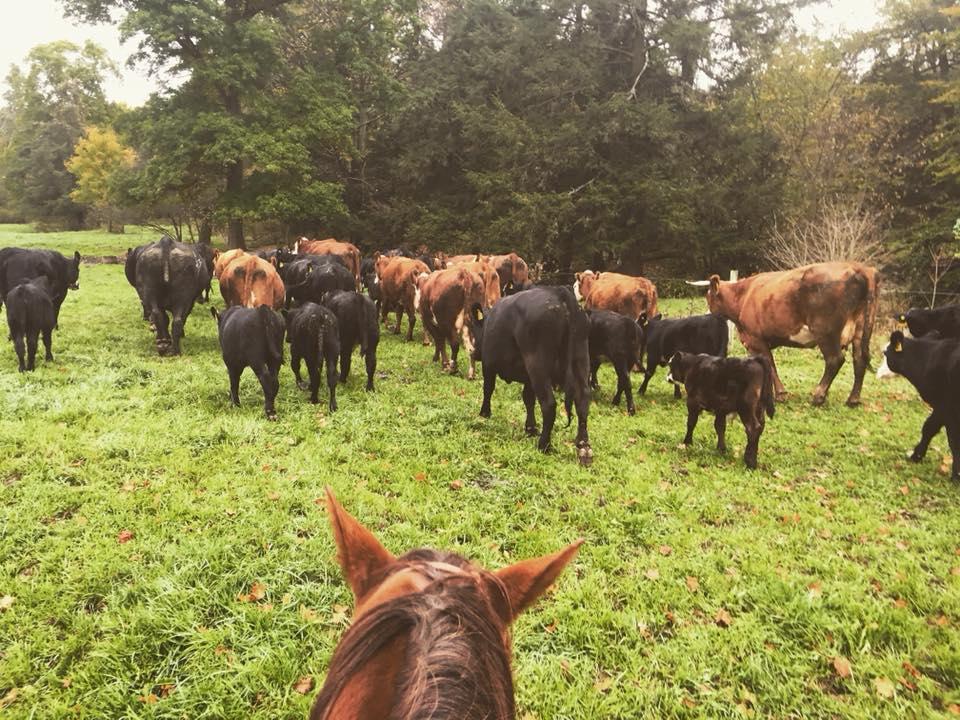 This morning as my horse Jobber (because he’s an OTTB, I’m obligated to tell you that he’s an OTTB) ambled back from the pasture to the barn where I’d untack him, groom him and give him his cookies for being such a good boy, I was feeling pretty smug, pleased with myself and immensely proud of my horse. It was cool and windy with a fine mist of blowing rain, the ground was sodden and it was a generally inhospitable day, but we had just successfully gathered and moved the farm’s cattle herd to rotate pastures. Usually we tried to buddy up to do this task, with at least two riders making life a lot easier, but with the rest of the family and staff tied up with other tasks, Jobber and I had to go it alone — and it had gone fantastically, surprisingly well.

There’s always satisfaction in a job well done, especially, for me, when it involves my horse working well and actually working — accomplishing a task around the farm that requires actual horsepower. But as my mind wandered to other riders and trainers I knew, that sense of pride slowly deflated.

In my recent travels, I’ve met a rancher from Idaho running several thousand cattle up in the mountains (also on an OTTB!); I have a friend in Montana working as the manager of a giant grass-fed operation. Some of the local folks I had met at the Thoroughbred Makeover were real hands, swinging ropes and handling cattle with the ease of lifelong ranchers. Then there were my old friends at the ranch in Wyoming where I used to work, managing not only the large horse herd for guests but a few hundred pairs of cattle as well. True, I had worked for them for several summers and learned a lot about myself, people, horse training and working cattle (sometimes all at the same time) but at the same time, it was a dude ranch — did that make my western experience less legitimate?

All I had done today was moved about twenty pairs plus the bull between pastures. Sure, there were some topographical challenges along the way that required both horsemanship and stocksmanship to position my horse in just the right spot to influence the movement of the herd, but it wasn’t like I was out trailing a thousand steers thirty miles through the mountains on a well-broke horse. Did I have any right to say I knew what I was doing.

I hadn’t been born on a farm or a ranch, but I got there as soon as I could — so went the joke, the way I found myself indirectly and inadvertently apologizing for myself at various gatherings of farmers, cattlemen or cowboys. I was born in suburban Pennsylvania, learning to ride at the local lesson barn, working my way up through various 4H horse projects before greatly expanding my equine horizons at college and the Wyoming ranch. (The fact that my friend out in Montana followed basically the exact same track, starting in New Jersey, somehow never seems to influence my parade of dismal comparisons.)

Imposter syndrome might be a catchy name for what you could also call a self esteem problem, but it’s defined as “a pervasive feeling of self-doubt, insecurity, or fraudulence despite often overwhelming evidence to the contrary.”

I don’t think of myself as an un-confident person — I’ve worked in several leadership roles, I can speak to strangers with ease, and heaven knows we need a fair amount of confidence just to stick with horses in the first place as it sometimes seems that their prime reason for existing on this planet is to keep humans humble. But someone tells me I’m a “good hand”? Calls me a cowgirl? Claims that they’re jealous of my ranch riding lifestyle? I immediately feel the need to correct them. I am certain upon meeting real ranchers that they can sense I’m a total fraud — just an East Coaster who happens to ride in a cow pasture.

In the logical part of my mind, I know this is silly: if you don’t know how to move cows around or get a horse to work them well, it’s pretty apparent, and I would not have been able to get our little herd gathered up and moved to new pasture today if I had no idea what I was doing. Yesterday, Jobber and I cut a sick cow out of the herd and penned her into a small paddock, then loaded her onto the trailer so she could get hauled down to the barn and treated. These things did not happen accidentally.

Former HN staff writer Sally Spickard, now writing for Heels Down Magazine, said it well in her essay on imposter syndrome in the equestrian world:

The cycle is endless. The dirty, awful truth is this: There is always, always going to be someone who is better than you. Better as in more experienced, better as in more successful – just better. This does not make you a fraud.

I’m well aware that there are better-broke horses than mine, better ropers, better stocksmen, and better riders. These are all things I can accept, and I look to these people as motivation to continue to improve. The hard part, of course, is accepting that their success and experience has nothing to do with mine, nor does it diminish what I’ve done and what I’ll do. I may not be the best hand out there, but I’m not an imposter, contrary to what my brain might tell me.

No, I wasn’t born on a farm, but I got there as soon as I could, and I keep working and learning to improve my horse, my livestock handling and myself. And in the end, that’s all that matters.