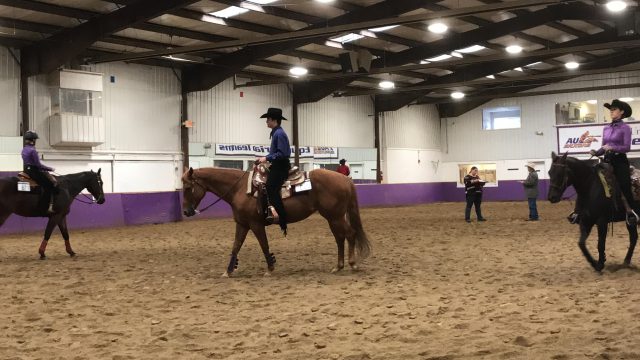 “My hands shook the entire time.” 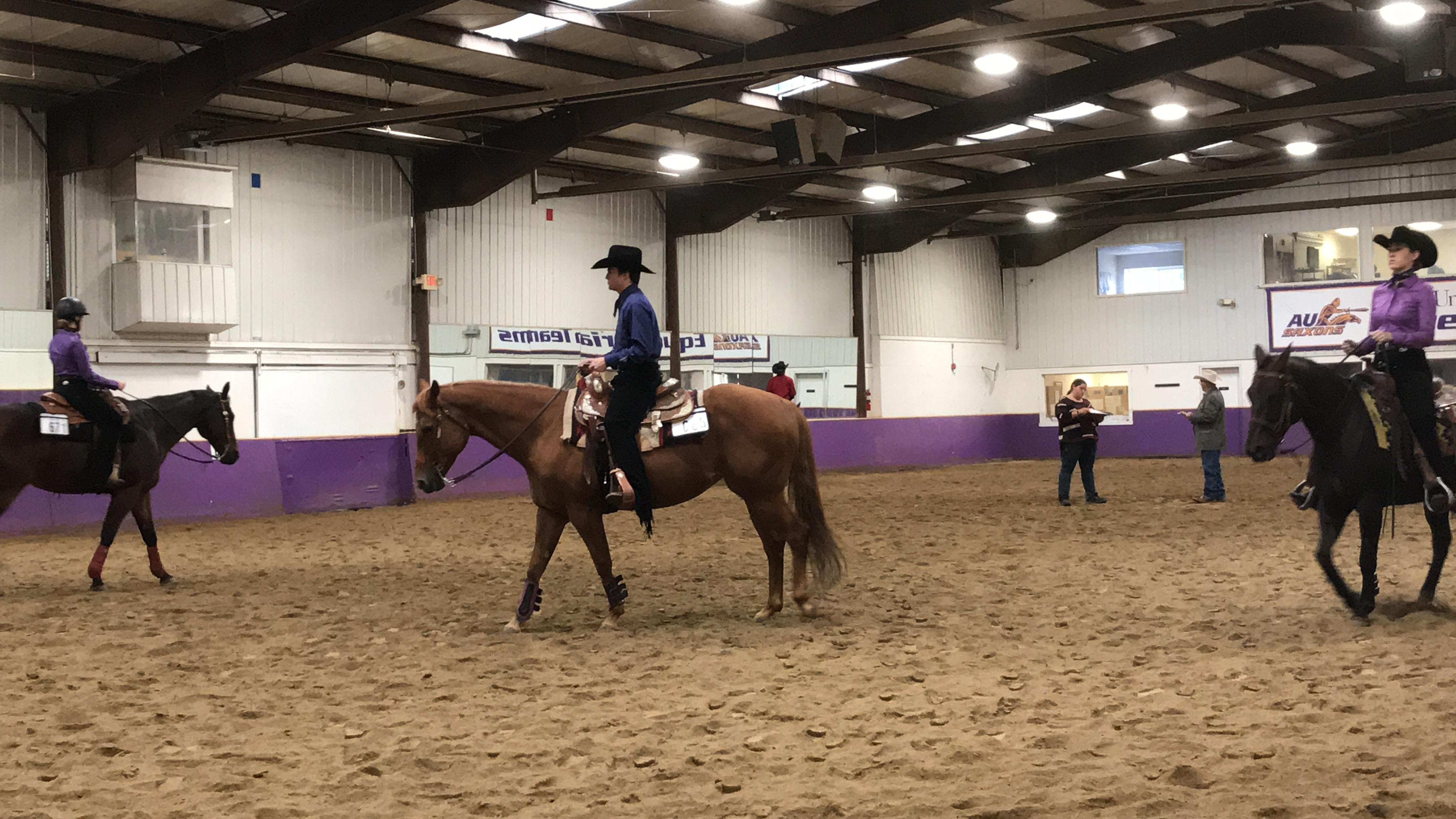 When you’ve been competing at the same place, at the same level of competition, and with the same people for long enough, horse shows become less and less nerve-wracking. On my fourth and final year of IHSA and my eighth year of riding at Alfred University, our home western shows give me minimal horse-show jitters. This is not because I expect the show to go a certain way, because they are always unpredictable, but because I am comfortable with my coaches, teammates, the horses, and other teams and coaches. I’m comfortable in my home horse show traditions—fish fry at the Kopper Keg restaurant in Cuba, NY (and dessert, for good luck) the night before the show, polo wrapping legs and duct taping reiners’ shoes the morning of, even the ritual of changing into show clothes in the office/team room storage closet.

One thing I could not have prepared myself for was how nervous I would be for my little brother’s first horse show. Kolby is a first-year engineering student at Alfred University, and, like any good sister, I nagged him relentlessly about joining the riding team until he finally agreed. He has only ridden a handful of times at home, preferring to take his four-wheeler trail riding instead of going on horseback. However, he’s such a good sport that he decided to try out for the team in the walk-jog division, and showed for the first time at our first show of the season last weekend.

Naturally, since I’m the horse-crazy sibling, Kolby is the sibling better built for horsemanship—longer legs, straighter torso, more natural seat. He’s picked things up in his month of practices that took me years to master and already has a soft “feel” while riding, so the horses all love him. Even Slide, my two-year-old colt who’s never had anyone on his back besides me (and my three-year-old cousins for pony rides), jogged around for Kolby willingly, stretching into a cadenced, impulsive trot that Kolby sat better than I can and melting into the ground when he said “whoa.” I feel a little smug that he fits into the barn environment so well after showing no interest in it for all these years. 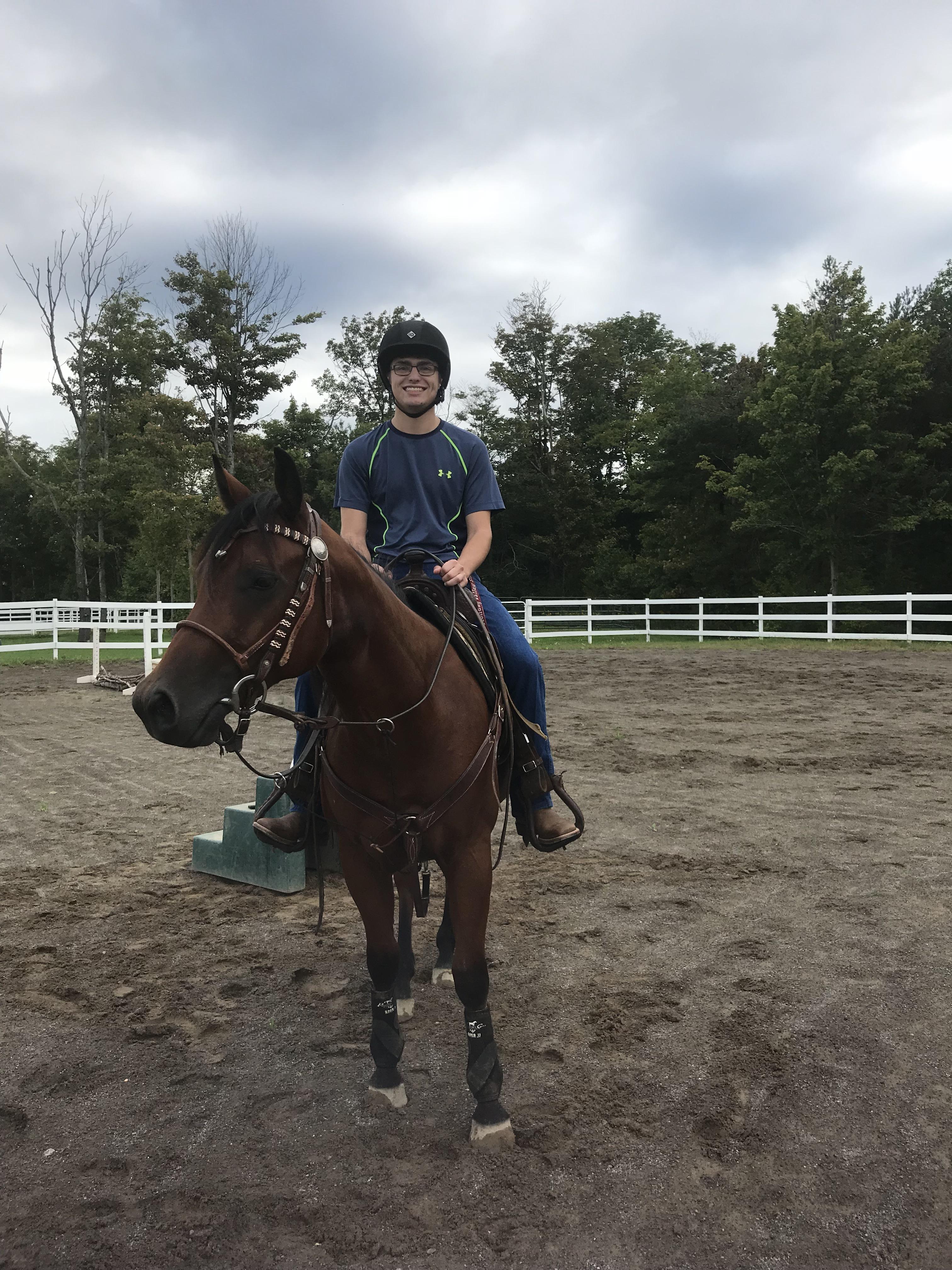 On the day of the horse show, Kolby and I both drew the same horse for walk-jog and open, respectively. Our draw was Sarah, aka Good Heavens I’m Hot, a red Quarter Horse mare who was named Horse of the Show at the 2017 IHSA Nationals and has carried hundreds of people to blue-ribbon finishes in her day. I rode her first and, several classes later, handed her off to Kolby. I shared my hat and a black scarf with Kolby for this show, and (like any older sibling would) took maybe a little too much pleasure in gluing my hat to his head with hairspray and bobby-pinning it on.

I stood by the rail to take a video of his class, but was so anxious for him that my hands shook the entire time. The calm I channel (“the ice in my veins,” one of my coaches calls it) in my own riding was gone while Kolby rode, and when he was done I was tired from trying to ride every step with him from the sidelines. I felt like someone’s dad who gets a little too into his kid’s little league baseball game, cheering on the edge of his seat from the bleachers. There’s no crying in baseball or horse shows, but when Kolby finished his class I was almost in tears with pride at how well he had done and how hard he’s been working.

This is my last year of riding in IHSA, but I know the underclassmen rising through the ranks are up to fill the slots on the team that this year’s graduating seniors will leave empty. In the meantime, I look forward to watching Kolby show and come into his own as an equestrian, and hopefully the next time I take a video of him I can do it with a little more poise.