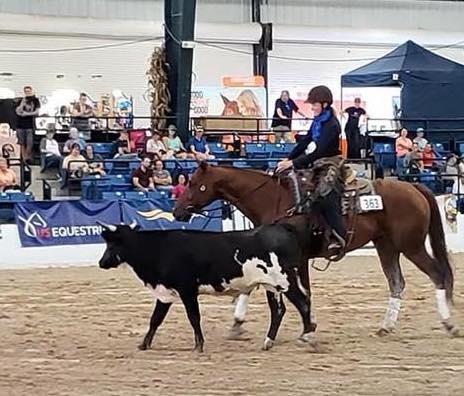 “While I had been looking forward to showing Jobber’s talents with cattle in the freestyle, I equally had zero expectations for the class as far as placing and scoring went — I simply wanted to show the world that Thoroughbreds could work cows!”

I’ve grown strangely accustomed in the five days that I’ve been here in Kentucky to a number of things: getting up happily (well, maybe not happily, but promptly, anyway) before dawn, operating with little sleep, little food, and tragically way too little water, and spending about 14 hours at the show grounds. This is the horse show life: it’s been a long time since I’ve lived it, and while it’s bizarre and strange and taxing on every system, it’s also glorious, triumphant and stupidly fun.

This morning, however, was unique.

“I need to be at the stirrup cup in twenty minutes and I’m panicking” read the text message I read in the pre-dawn darkness. Meagan DeLisle (of HN and JN fame) had been braiding horses literally all night long, and as often happens with dedicated braiders, had left her horse for last… meaning that he was still chilling out in his stall, braided down but not pulled up.

That’s how I wound up with a pull-through in my hand, hastily pulling up hunter braid for the first time in about a decade, a headlamp shining the way as Meagan pulled on her show clothes and tacked up her horse. I’m pleased to say that not only did the braids not look completely terrible when the sun actually rose, but Meagan made it to the stirrup cup with time to spare, and a glass of port later, was looking much more optimistic about her day. 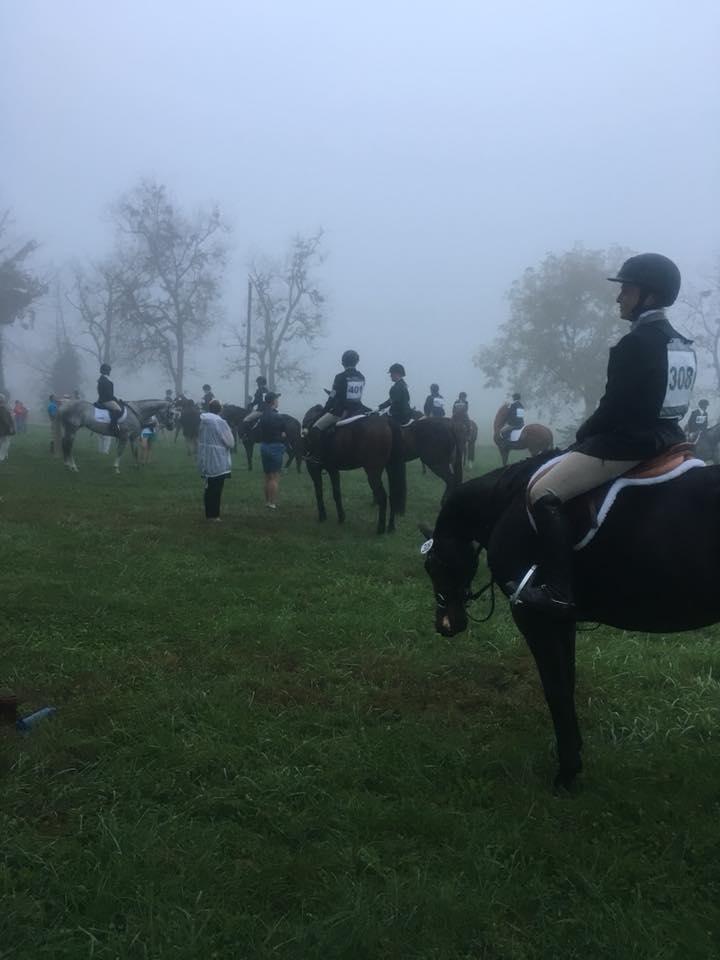 Meagan and Flash gathering at the Stirrup Cup on a very picturesque hunting morning. Photo by Kristen Kovatch

Jobber was back to “home Jobber” mode after extensive hand-grazing and riding over the past few days, and after another long graze this morning, I anticipated needing only minimal warm-up for the freestyle performance. While I had been looking forward to showing Jobber’s talents with cattle in the freestyle, I equally had zero expectations for the class as far as placing and scoring went — I simply wanted to show the world that Thoroughbreds could work cows!

Expectations should have been placed, perhaps, on the unknown factor — the cow itself. Fellow ranch work competitor Fawn had kindly hauled in a roping steer on a trailer for me, and while our experience was mostly in working cows and calves in the pasture, I was pretty confident that Jobber would take to a roping steer easily. What I should have doubted, perhaps, was the roping steer’s ability to take to us. From the moment the black and white booger stepped off the trailer, he was pretty resistant to any of our attempts to actually direct him anywhere… almost as though that big indoor atmosphere that I had worried about with Jobber had struck fear right into his little bovine heart.

In a normal reined cow horse run — the specific discipline in which I hope to show Jobber in 2019 — this cow would have gotten us a whistle blow and a new cow pretty much immediately. But in the Makeover’s freestyle format, in which this was a BYO cow event, that wasn’t really an option… so we tried to make the most of what we had. At least we kept the spectators entertained.

Freestyle at the 2018 Thoroughbred Makeover

In a regular reined cow horse run, this cow would have been whistled out and I would have gotten a new one — but this was the freestyle and I had to work with what I got on a time crunch! Therefore, enjoy four minutes of me trying various methods to get this little booger to move as Jobber tries his hardest, despite the cow goring him (he is fine, but I think he might STILL be mad about it).

On the plus side, I’ve never used a flag around Jobber before (this may shock some stocksmen, but it’s just not a tool we typically use on our farm). I’m pleased he handled that well, and also beyond pleased that he lost absolutely none of his bravery after getting thumped in the chest by this irritated steer.

Shout-out to all of the random folks who jumped over the wall to help herd this booger of a cow back to his trailer! It got a little western, but it got done.

Our Makeover performances are now behind us: I’ll come back to the indoor arena tomorrow for the awards presentation for working ranch, in which we are officially seventh place — for which I’m over the moon happy. (Don’t forget that the finale day is livestreamed, and you can vote for America’s Most Wanted Thoroughbred!) For the way that Jobber just walks into the indoor ring with all of its atmosphere and all eyes on him as though he does this every day — when in reality he spends his time outside just wandering around the pastures with me — made me so unbelievably proud of him and so grateful for the horse he has become. I am truly a lucky horse owner. 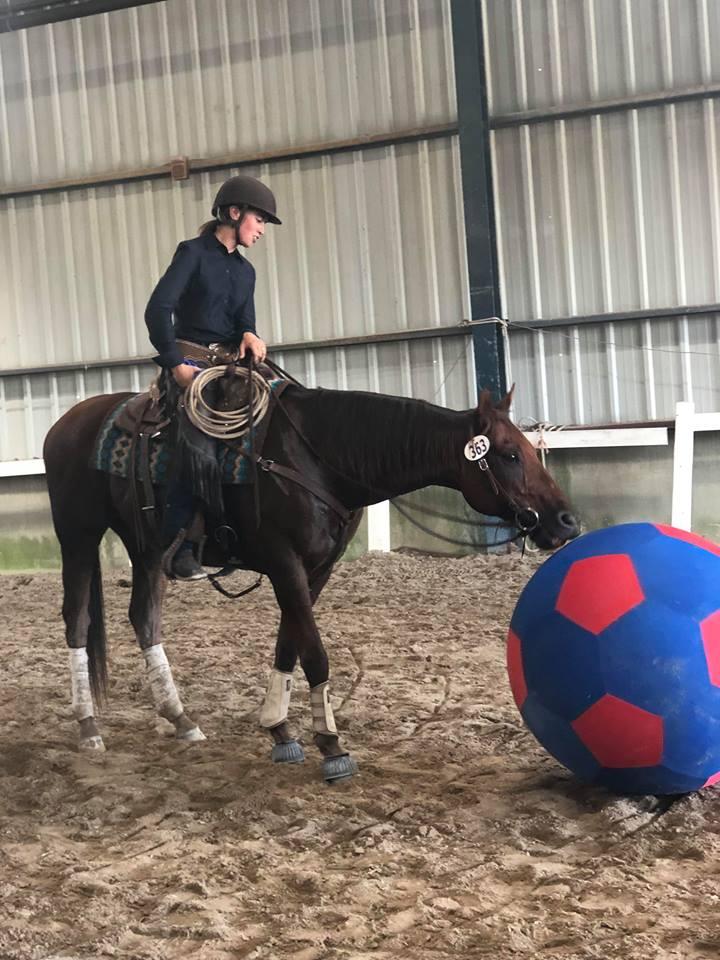 Oh, and Jobber also found this giant soccer ball in the warm-up ring and dragged me over so he could push it around. Photo by Melissa Murray.

As the sun set this evening, Meagan and I, inherently just two grown-up pony children, slipped on our helmets and halters and let Flash and Jobber graze lazily out in the field, enjoying the fact that thanks to the Makeover, we had found these lifetime horses for ourselves. We may not be here to chase the prizes and the placings, but we are only here because this organization and this event made us believe that we could tackle this challenge.

The past ten months with Jobber have been full of highs and lows, challenges and rewards, and so much expansion of my horse knowledge. He has truly been a life-changing horse for me, and I’m looking forward to continuing the journey when we get home… after I turn him out and let him chase our cows around on his own for a few days out on the pasture. 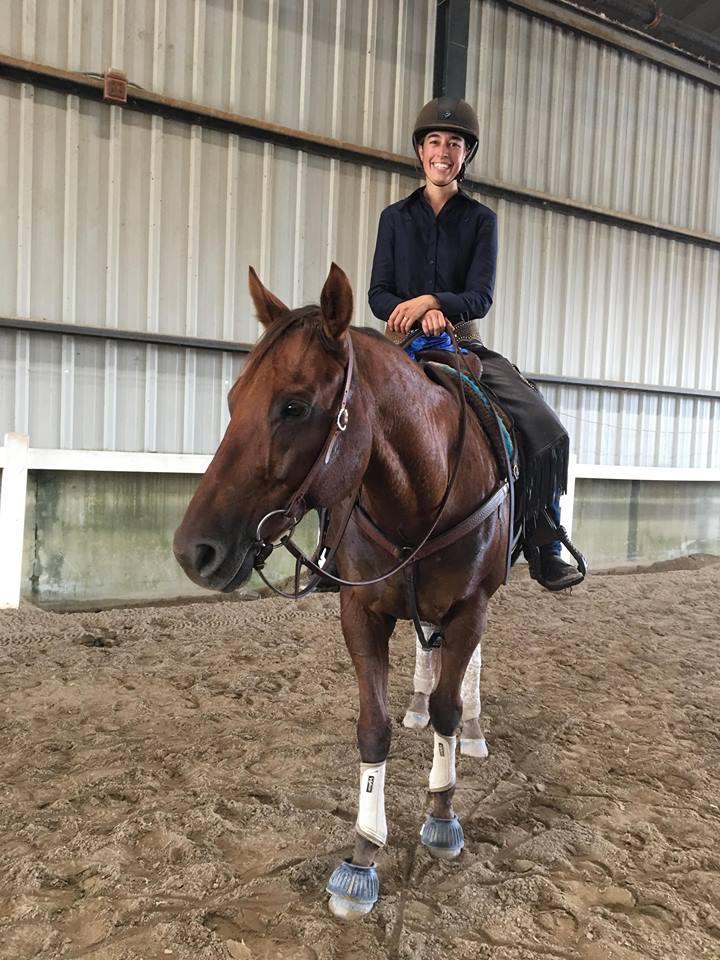