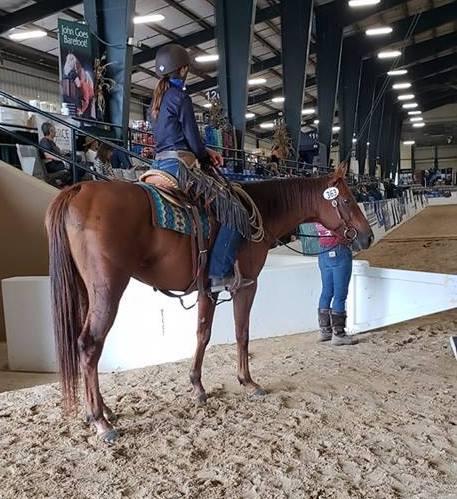 All of the ups and downs, training challenges, blood, sweat and tears came down to today: Kristen Kovatch and Jobber Bill showed today in the ranch work division at the Thoroughbred Makeover. How did it go? Click here for the full recap and video!

Well, it’s official: I have the best horse in the world.

Let me back up a little.

It was finally the official start of the Thoroughbred Makeover, and it was organized chaos: horses coming and going, all braided to the nines as they headed to the hunter and jumper rings; eventers strutted out to the cross-country course and the dressage horses headed up to the iconic Rolex arena. I particularly loved seeing the barrel racers in their bright colors coming back through the barns, especially the barrel racer who had been her horse’s winning jockey, bringing him full circle into his second career.

We had plenty of time to kill this morning before the ranch work started, feasibly with a trail course inspection at noon. That ended up running late, and then the ranch itself ran late — so I had several hours to take Jobber out to the big field and go for a ride.

From our vantage point on top of the hill, I could catch glimpses of the eventers tackling the cross country course, hunters and jumpers warming up in the schooling ring and lots of horses coming out to hand-graze between competition. Despite the tension and likely stress among many of the competitors, everyone with whom I interacted was positive, encouraging and supportive of their fellows. This is hands-down the nicest horse show I have ever been to.

After letting Jobber canter his great big heart out in the field and walking on a long rein back to the barn, it was time for the ranch trail inspection. I somehow picked up a group of folks all walking the course together, and hope I helped steer everyone to success who was seeking some guidance!

The course was challenging: every competitor would first enter and perform the ranch riding pattern, which called for smooth upward and downward transitions at a forward but relaxed pace; the trail portion was a fascinating array of obstacles including a log drag, sidepassing, numerous pole obstacles, ground tying, a gate and the most challenging of all — trotting through a “covered wagon” (essentially a giant tent).

Jobber was back to his unflappable, mellow self, and no matter how well or poorly the ranch ride would go, I was just over the moon that he was happy and willing again after yesterday’s total meltdown in the stall. He ambled around the warm-up pen on a loose rein, stood at the in-gate and watched some of our new friends ride, and soon it was our turn.

At this point, I knew the Makeover would come down to two things: was the horse prepared? Would he handle the atmosphere? We had done our homework, I felt, at home — we had schooled the majority of these obstacles (maybe not the wagon) and I knew he could do them all, feasibly. But while we had schooled plenty in the indoor arena, it was a far different scene today with the stands full of people, all of the vendors set up, the announcer and music going full-blast and obstacles in every direction. The atmosphere worried me the most.

Waiting at the in gate. Photo by Nancy Kohler-Cunningham.

Naturally, I needn’t have worried about any of this at all. Jobber strutted casually into the arena like he owned the place and we laid down what I felt was a great pattern: straight and balanced with solid transitions and a great display of lengthening and collecting.

Jobber’s big weakness is his klutziness — despite schooling him extensively both in hand and under saddle over poles, I knew this would be our weak spot, and with the poles set pretty close to require the horse to really read and adjust his stride, I was anticipating likely bashing into most of them. True to form, Jobber bounced off pretty much every pole, which cost us some big points, but he had nailed his transitions and his leads and I couldn’t have asked for more.

The first obstacle of the trail course was the covered wagon, and in my strategizing with my support team and my new friends in the ranch riding class, I stated my objective — the wagon would set the stage for how we tackled the rest of the course. If he handled the wagon well, we would go for the higher degree of difficulty. If the wagon was a disaster, we would play conservative to build his confidence back up and end on a good note.

Jobber made the turn up the centerline right under the Jumbotron at a bright working trot, ears pricked forward — just before the wagon, I asked him to walk, and with just the barest hesitation he marched right under the canopy and trotted out the other side. Anyone sitting in the upper half of the ring was treated to an ear-to-ear grin as we bounced out of the wagon and on to the next obstacle. 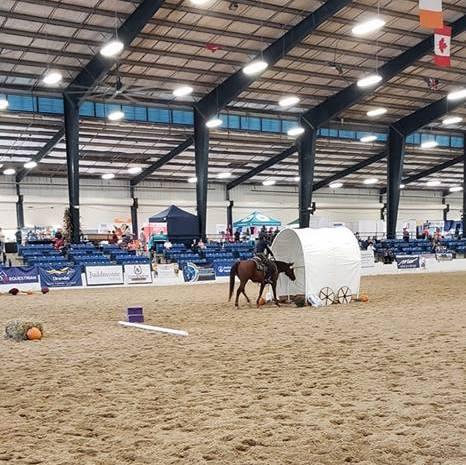 Heading into the wagon without hesitation. Photo by Nancy Kohler-Cunningham

The log drag had some options for degree of difficulty: one could take the safer, conservative route and drag to the right, leaving the log to the inside and not wrapping around the horse’s haunches, or one could drag to the left and show that their horse was comfortable with the rope no matter where it went. The purpose of the log drag in the ranch course is to imitate dragging a calf to the branding fire, and if my experience with cattle has taught me one thing it’s that the unexpected can happen at any moment. We opted to take the higher degree of difficult and head left into our figure eight.

At the course walk, the judges had stated that if you could replace the log exactly where it stated, you’d be right on the money — and with a little maneuvering, we parked that log right where we had picked it up, then nicely sidepassed and backed to replace the rope on the tree. Of all of the obstacles we tackled today, I’m most proud of how we handled the drag.

The back and sidepass was a bit rough — Jobber will sometimes swing a hind leg out while starting his back, and that caused him to straddle a pole rather than back into the chute. The sidepass was a little sticky to get started, but in taking my time and thinking our way through it, we were able to recover and finish the obstacle in decent form.

He handled the turnaround in the box well, and picked right up into the left lead lope before taking the highest degree of difficulty and transitioning to the walk right before the ground poles for a second time — knowing he would probably step on them all again, I knew I had to make up points where I could! We then handled the spoke wheel of raised poles like a real winner, stepping carefully and not knocking a single one.

The ground tie, despite having practiced at home, just didn’t really pan out — Jobber stood for about half a beat before being pretty certain he had to walk with me, which I can forgive completely. We remounted, worked the gate to exit the pattern, and we had completed a dream ride at the Thoroughbred Makeover.

Part one of two videos of our ranch work patterns! Thanks to Kate Samuels for the videos.

Part two of our ranch work patterns at the 2018 Thoroughbred Makeover! Thanks to Kate Samuels for the video.

My support team rushed down out of the stands, all of them — my coach Nancy, my friend Eileen and new bestie/Jumper Nation editor Meagan — with tears in their eyes over how brave and amazing my little horse had been. I am so grateful for all of their help this week.

Additionally, the spectators are just awesome. At every obstacle, I could hear quiet calls of “good job,” “that was beautiful,” “good work, cowgirl” and numerous claps, cheers and whistles. I said it before up above, but I’ll say it again — this is hands-down the nicest horse show I have ever been to.

I fully expected to finish mid-pack, but as of press time, I’m in the top ten! I’m out of the top five that will be called back to ride in the finale, but if I stay in the top ten, I do get to come back and get a big pretty ribbon. While I’m not in this for the prizes, the simple validation of how amazing my little horse is will mean the world if I get to hang a ribbon on his bridle and look at a tangible reminder of all of our hours of hard work.

This has already been one of the best experiences in my horse life, and there are still two more days to go. Go OTTBs, and go riding!