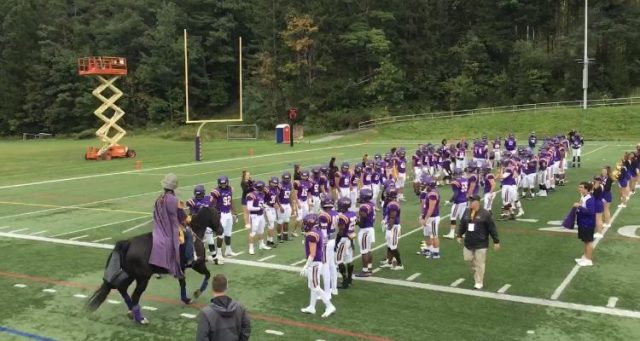 Riding as your school’s living mascot is one of the more unique and exciting (if bizarre) things you can do with a horse — and Haley Ruffner has taken up the mantle for Alfred University. 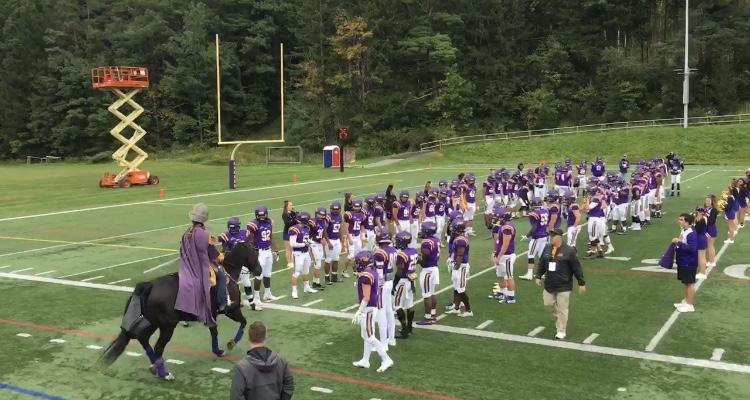 Charging onto the field. Photo by Kendra Byrwa

When your coaches ask if you want to spend your Saturday dressed up in a ridiculous knight costume complete with sword, chain mail, cape, and stuffed helmet with a visor to gallop around on a football field for your school’s Homecoming game, of course you say yes. Even if you’ve only been to three football games during your four years at school, only vaguely know the rules of the game, and generally dislike being the center of attention at any event.

This weekend, I donned the ancient King Alfred costume (following in the footsteps of Horse Nation’s own Kristen Kovatch Bentley) and rode my trusty warhorse Alden (aka trusty school horse Sugar) around in celebration of Alfred University’s football team. In the past, the mascot has been relegated to the grass at the end of the football field, for fear of horse poop on the football field. Now, however, we are allowed on the turf with the condition that Sugar wears a poop bag at all times (classy lady that she is, she has yet to actually use it, instead waiting until she’s back on the trailer). The newest plan for the Homecoming game was for King Alfred to lead the football team out onto the field through a lineup of players and cheerleaders yelling “GO HORSE!” and fist-pumping as I rode between them.

What would be a harrowing experience for most horses seems to be exciting for Sugar. In general, I don’t consider myself a fearful rider, but the prospect of riding through a tight tunnel of yelling men in helmets was daunting—how much trouble would I be in if she spooked and kicked one of them? Sugar, however, is always ready for her moment in the spotlight. She pranced over the first painted line on the field, then loped along with her ears up as though she expected the crowd to cheer for her. I held my sword in the air, feeling like if I actually had to ride into battle on Sugar she most likely would not care. The pep band, the crowd screaming, the announcer, and the various sudden bangs and snaps from the bleachers did not faze her. Even standing just outside the end zone with two football teams charging straight at her, she stood her ground and watched calmly, resting a hind leg.

Naturally, she also knows more about football than I do, and seemed more attentive to and invested in the game than any of her human entourage. She waited patiently for her team to score, then jumped out to gallop a little victory lap on the field or spin outside the end zone. A fan this weekend asked me on Sugar’s behalf if we would consider dressing up as a buffalo to ride as the Bills’ mascot, but Sugar declined on the grounds that they don’t score enough touchdowns to merit her traveling with them. If she can’t be the star of the show, she doesn’t want to be involved—Sugar has the most self-confidence and heart of any horse at the barn.

During halftime when the rest of the football team slacks off, Sugar let me have a break while she went to greet her fans by the bleachers, accepting pets and cookies from her band of admirers. It’s only a matter of time before she starts signing autographs, but until then she’s satisfied with the cheers she gets every time she carries her rider across the field after each touchdown. Although King Alfred and Alden are both historically male, Sugar and the all-female mascot riders throughout the years have proven their prowess on the battlefield that belongs to Alfred University football.