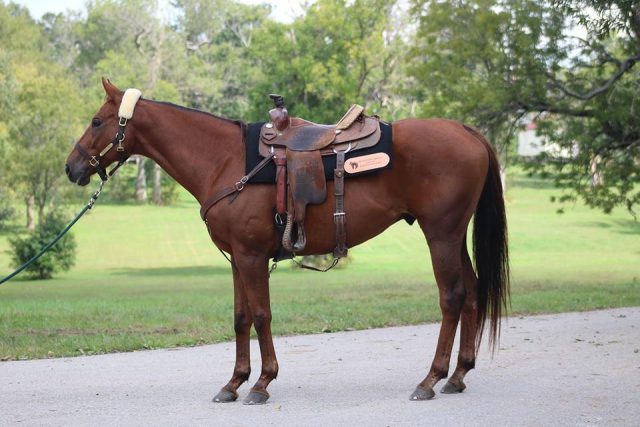 “So I don’t want to alarm you, but Jobber’s kind of freaking out in his stall.” Highs, lows, big challenges and great moments — Kristen Kovatch and her Thoroughbred Makeover horse Jobber Bill have truly done it all today.

There are a few lines to open a phone call that no horse owner really ever wants to hear, but Meagan DeLisle of Jumper Nation tried her hardest to break it to me easy.

“… Jobber’s kind of freaking out.”

I hung up the phone, made a hasty apology to the volunteer coordinator who I was supposed to be helping this morning — they had given me a golf cart! I was going to be useful! — and hustled back across the Kentucky Horse Park to Barn 14, where I could hear the distant but distinctive banging of a hoof meeting stall door. Meagan and one of our shedrow neighbors were gathered outside Jobber’s stall, trying to keep him quiet, but there he was, his bedding mounded up into a mountain in the corner, flinging himself in circles around the stall dripping in a full-body sweat.

I hurried to get his halter on and take him out, having the sneaking suspicion that my good-minded little horse had finally had enough of being “trapped” in a 10 x 10 stall. After all, Jobber lives out on a glorious wide pasture with his herdmates, wandering at will up and down the big hill grazing on what I firmly believe is some of the finest grass in the nation. (The proof is in the pudding, and he’s filled out gorgeously.) 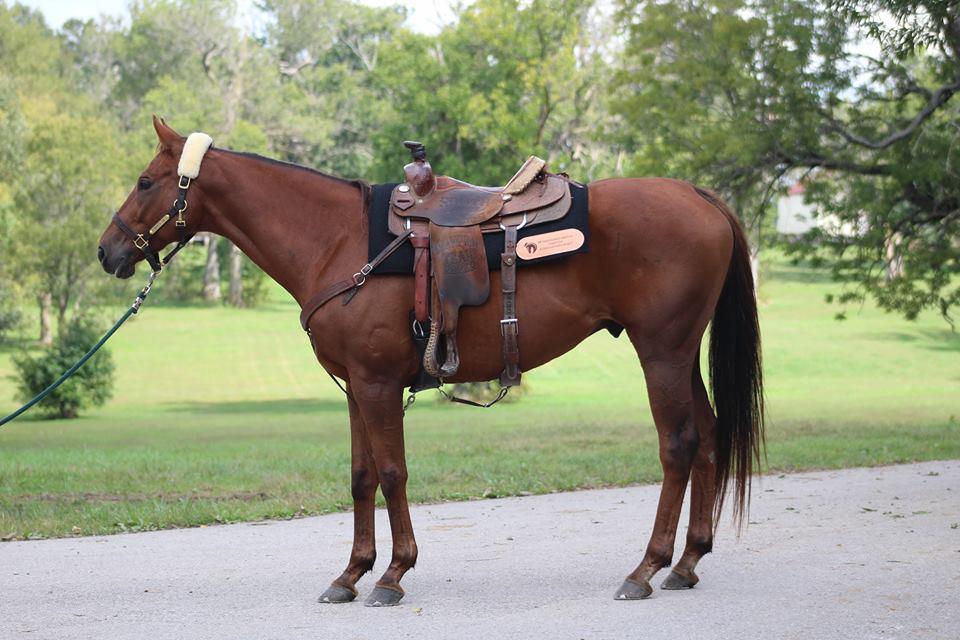 This booty and topline powered by good old-fashioned grass. Photo by Allison Howell

We headed out to the cross-country field behind the barns where Jobber fretfully grabbed mouthfuls of grass, then circled me, then grabbed mouthfuls of grass, then circled again, his ears and eyes constantly flickering at any movement or sound. Over the next two hours, Jobber settled, cooled, and relaxed once again, finally settling to the green grass he had been clearly desiring.

The signs had really been there for about twenty-four hours, but it took this very clear shout from Jobber to really get through to me — this show setup is a drastically different environment from what he’s used to, and I had taken too much for granted with his generally good attitude about life. Standing out in that field while Jobber gradually settled, I made a silent promise to try to listen to him a bit better.

So we saddled up and headed back to the field. After all, as a proud member of #TeamNoArena, what sense was there in heading to yet another schooling ring — fantastic though the footing may be? We started out on a long-rein hill walk, heading up to the top, then back down, then at the trot, circling around various cross-country obstacles and trees. When the moment felt right, I cued him into a ground-covering canter, pointed him up the hill and turned him loose.

Jobber’s strides ate up the ground as though he was hungry to work — we were at the top of the big hill before I knew it, arcing wide along the fence as the earth sloped gently down to an old stone wall. The black fenceposts flashed by as I settled into the regular rhythm, and we could have been in our home pasture, racing the wind, Jobber’s ears pricked happily forward and his hoofbeats cadenced and regular. He slowed himself at the end of the fenceline, settling down to a trot and then a walk, striding forward easily and happily on a long rein, finally able to blow off the steam that had clearly been building since he first set foot in his stall.

Many Thoroughbred lovers will state that it takes quite a lot to get to the bottom of these horses, and I no longer had any qualms that I would “wear Jobber out” as long as good horsemanship still dictated the day. We hacked to the indoor arena, worked in front of the massive Jumbotron, hacked back across the park and cooled down so Jobber could settle down for a bit of lunch, then saddled back up in the afternoon for a very special hack — the United Nations.

That’s what Meagan called the best hacking group ever: Meagan of Jumper Nation on Flash, Kate Samuels of Eventing Nation on Turkey and me on Jobber, plus my good friend from college Kait on her Frankie (shout out to Frankie for the best Jockey Club name ever — Fakeittilumakeit). We went on a lovely hack all over the park, enjoying catching up in a unique meeting as we let our horses relax. As far as we know, this is the first time staff from all three sites have gotten together — and how special to be riding together on Thoroughbreds at the Horse Park!

After the evening’s competitor meeting, Meagan and I took our horses back out to the grass field for one last hand-graze, meeting some new friends along the way and watching the sun set on what turned out to be another perfect Kentucky day. It may have started awfully rough, but I learned a lot about my horse and my horsemanship — and all was well as the sun went down in a painted sky.