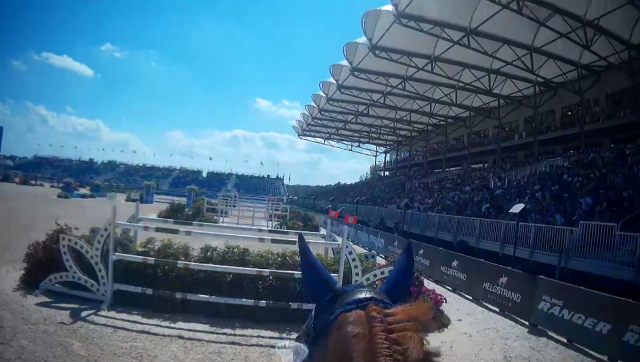 What better way to close the chapter on WEG than with a smashing show jumping round from the rider’s perspective?

While much of the equestrian world was hung up on Danielle Goldstein’s feathered hairstyle, we’re still not over the rider’s style over fences — she and Lizzymary finished 20th of a jaw-dropping field of 124 individual competitors at the World Equestrian Games’ show jumping, displaying incredible grit and handiness in the marathon of jumping over several days.

For her final round in the imposing U.S. Trust Arena of Tryon International Equestrian Center, Goldstein sported a helmet camera to bring us all along for the ride. While the phrase “you could hear a pin drop” is pretty cliche at this point, we can’t think of a better way to describe the atmosphere in the arena — moments of tense silence as Goldstein and Lizzymary tackle each effort, and then a massive eruption of cheers as they land the final fence.

Up, Up & Away….Most of us can only dream of riding a mare like Lizziemary around a World Championship track so Danielle Goldstein/Starwyn Farms LLC is taking us along with us as she jumps into the final!

Until next time, World Equestrian Games — we’ll miss you!

The WEG feed and forage team from Kentucky Equine Research is hard at work getting the first flights of horses set up. About 170 eventing, endurance, dressage, and reining horses have arrived on the venue so far. As horses arrive from abroad, they transfer from the airport to post-arrival quarantine on the venue. Most horses will require a delivery feed and forage to tide them over during the 42-hour quarantine. When the horse is released, anything brought into quarantine has to be disposed of, so a separate order of feed and forage needs to be available when they arrive at competition stabling. Fulfilling these double orders has the team hopping! Stay up-to-date with the latest from behind the scenes at WEG: https://ker.com/equinews/news/weg/