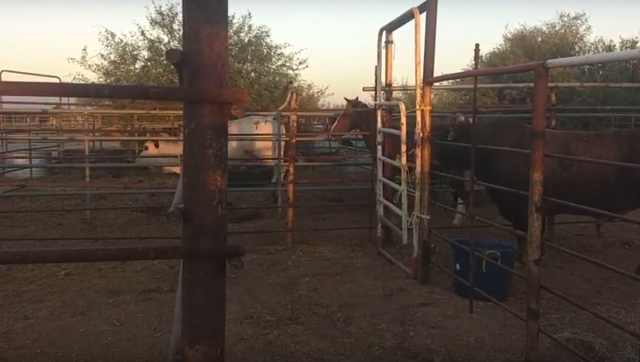 Playtime is important to every species, from household pets to horses and cattle! And for some animals, that playtime need not be limited to sharing only with your own species — in fact, Sriracha seems to prefer playing with the bucking bulls.

From reader Laura Beacham: “The little chestnut pony mare is a feral that I adopted from a rescue because she was not able to be adopted to just anyone. She has issues even at only three years of age, but I will keep her as my pasture pet until she leaves this earth. Her name at the rescue was Shelby but as her personality has bloomed I have changed her name. She is now known as Sriracha after the red hot sauce — she is red and fiery!

“The bucking bull she is playing with is known as Screamer, and they love to play like this. She could have easily gone through the chute and into the round pen that was behind me to avoid him. I wish I could have gotten closer but the brindle bull scares me enough that I will not go into the alley without having both eyes on him! All the bulls are in their own separate pens to keep her safe. For whatever reason she prefers bovine company to equine company — who knew? Also the hollering in the background was not Screamer but a yearling bull calf who was upset that I stopped scratching him. Who knew bulls could be so cool?”

About Laura: “Years ago I walked away from the horse industry. I kept up via the internet but vowed to never own another horse or work with them or anything. Back in May, a rescue contacted me after a statement I made on Facebook. I said “yes,” like a dazed and confused fiancee being proposed to — I have a weak spot for chestnut mares, especially when they have big wide blazes. I have worked with problem horses before and while my work schedule keeps me busy enough that I am unable to work with her as much as I would like to it is okay. Thanks to the property owners who let me use their facilities and to the rescue who allowed her in my life. Also, it looks like soon I may become the owner of a few cows… what did I get myself into?”