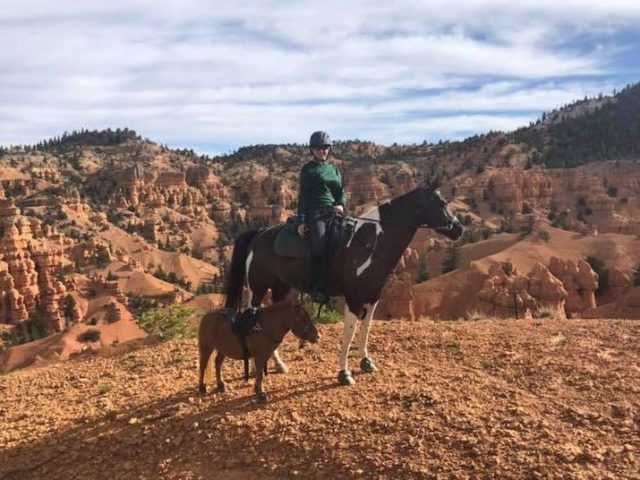 Jen Joines and her rescued miniature horse Kricket didn’t set out to become inspirational icons to show that no dream is too big — but here they are, living the dream, fresh off a 65-mile riding tour. We caught up with Jen to learn Kricket’s story! 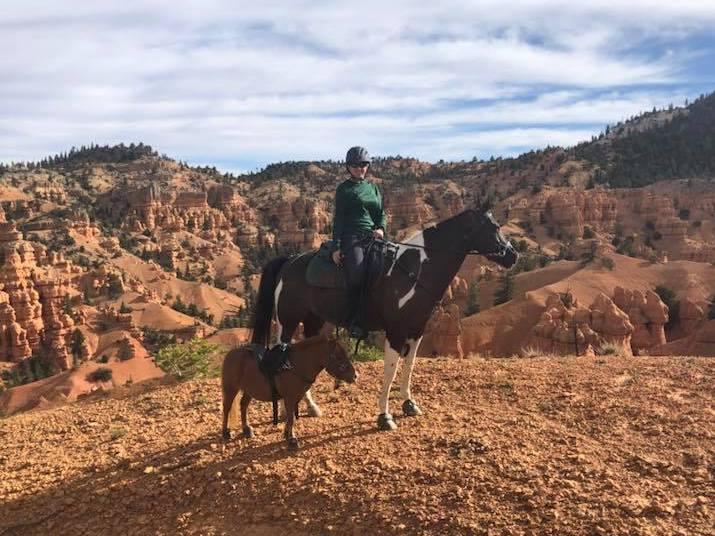 All photos/videos courtesy of Jen Joines.

All Jen Joines was really looking for was a companion animal.

“There was only one other horse on the property where I kept my paint mare,” describes Joines of Anaheim, California. “So when I took her out to ride, the other horse would panic, and vice-versa.” Joines worked out a deal with the property owner in which she would get a miniature horse to keep everyone company and not pay additional board, and set out to find the right horse. She had just organized the adoption of miniature rescue Kricket from Falcon Ridge Equine Rescue when the other horse on the property passed away. “I couldn’t in good faith change my mind at that point… so Kricket came home.” 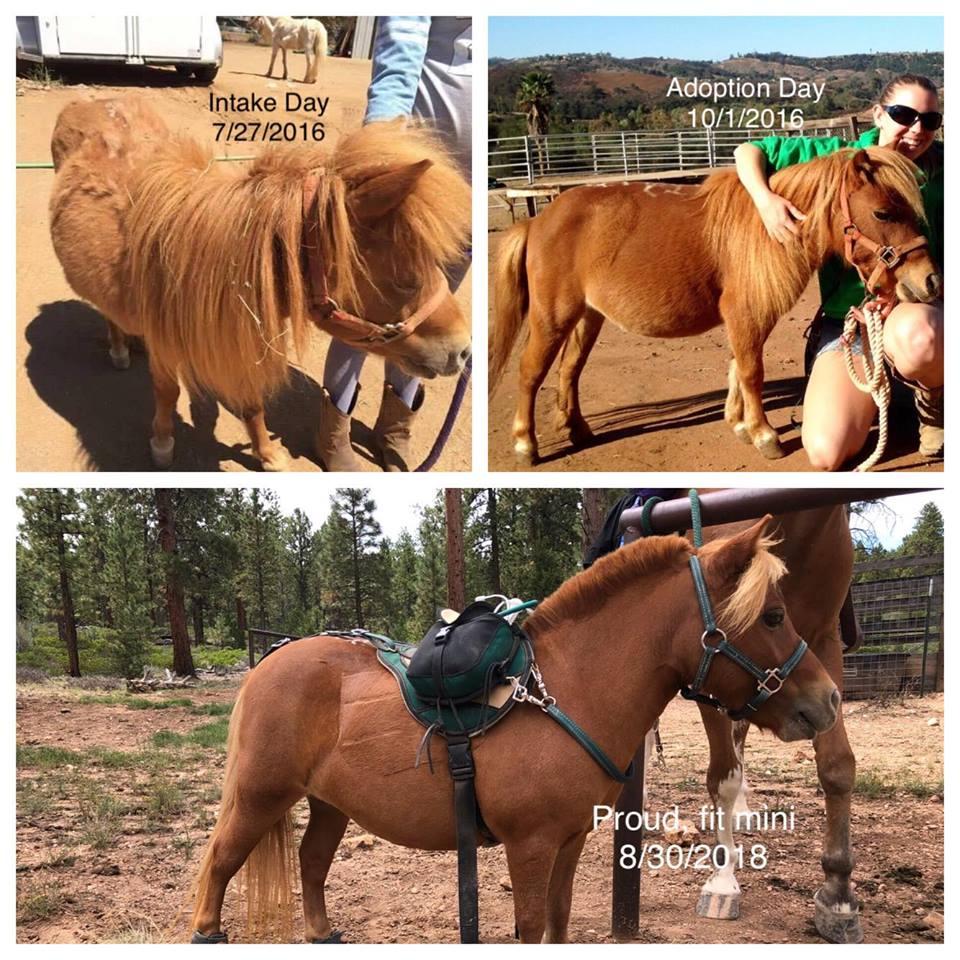 While she was in the best physical shape of the three miniatures who had been rescued together, Kricket was still a mess: she was at a good weight but had no muscle tone, and didn’t know how to move faster than a walk due to a lifetime of confinement. It took four people to get her into the trailer for the ride home in October of 2016.

Joines’ teenage neighbor stepped in to help, riding the paint mare while Joines slowly started bringing Kricket into work in-hand to get the horse out and moving. Joines has ridden a variety of disciplines, but most recently had started training in endurance; she followed the discipline’s principles to condition Kricket with long, slow, stamina-building miles.

When the teenage neighbor expressed a desire to try an introductory endurance race in May of 2017 — which requires an accompanying entered adult to be within one minute of a youth rider — Joines scanned the rules, realized that there was no rule that explicitly stated a horse had to be ridden, and signed herself up as the accompanying adult… with Kricket. 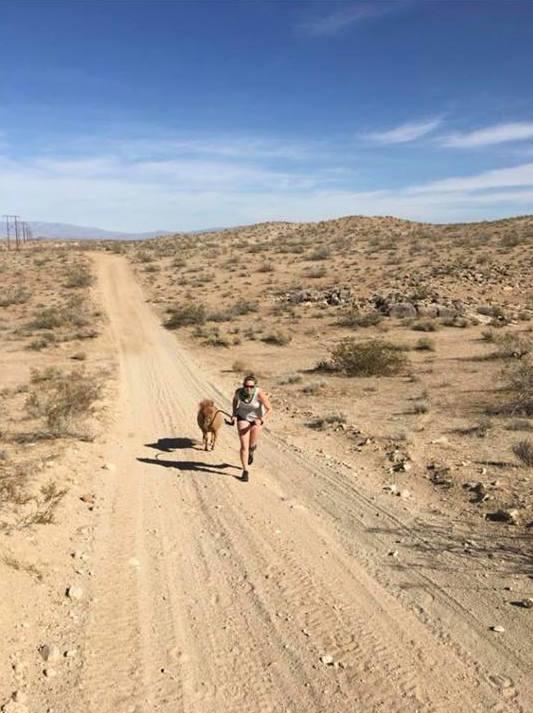 “So we walked 18 miles in the mountains. And just like every other entry, we vetted in, did the ride, had our mid-race vet check and vetted out.” Joines’ long, slow miles of conditioning had done the job, and while it may have taken them quite a long time to finish, Kricket did in fact finish.

“Everyone thinks I’m out of my mind, but so far no one has challenged me on it,” Joines details. She does make sure that she’s respectful of other horses and riders on the trail, especially those that for whatever reason totally fall apart at the sight of a mini — she and Kricket move to the side and let others pass as needed. “The only big problem I’m noticing now is that when they have water offered on the trail, it’s too high up for Kricket to reach! I pack a collapsible bowl for her so she can get a drink with everyone else.” 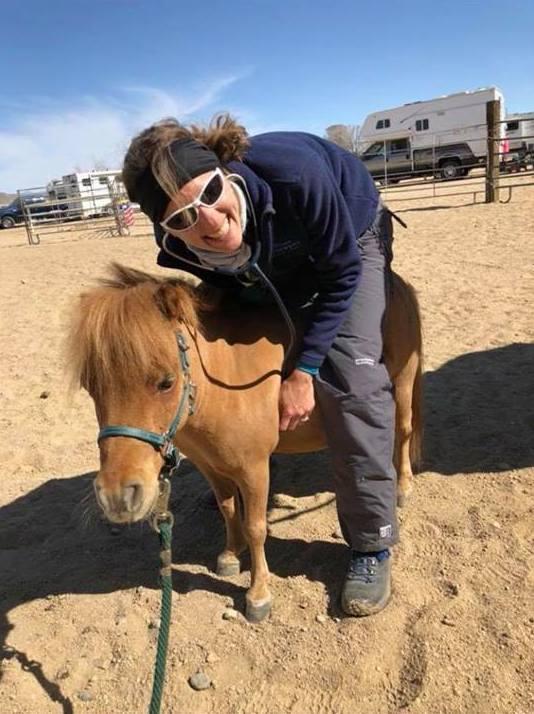 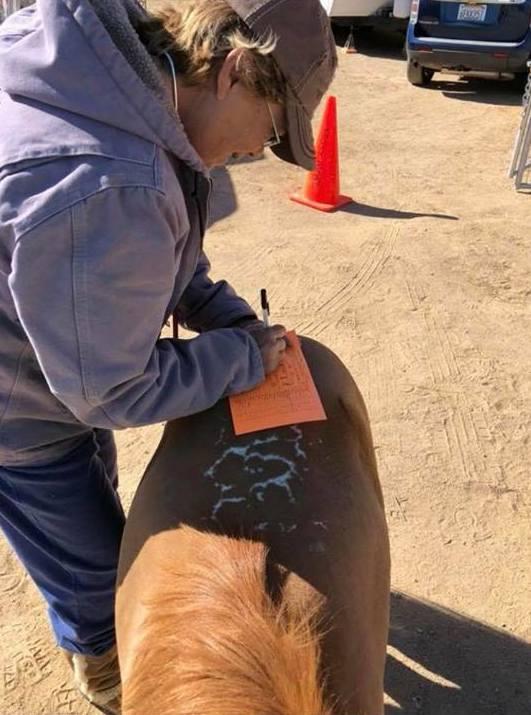 Accompanied by a variety of riders on Joines’ paint mare, she and Kricket have completed several introductory races on six legs, and gotten their time down from six and a half hours to two and a half hours. They’ve managed to beat a few horses in races as well! Kricket was also named Runner of the Month for August by Run Motivators, a virtual race organizer through which Joines tracks their on-foot miles (in Kricket’s name).

One big bucket list item for Joines was the AERC-sanctioned Grand Canyon ride. When her mare was diagnosed with a respiratory condition, Joines was unable to compete last year. “So I said ‘come hell or high water, we’re going this year,’ and we ended up turning it into a hundred-mile ride over ten days across four states.” And that, of course, included Kricket.

Posted by The Mini Adventures of Kricket on Monday, September 3, 2018

Video has since gone viral of brave little Kricket tackling some of the toughest riding trails in the American West, ponied behind Joines and her paint mare. The trio was accompanied by several of Joines’ friends and their horses who came along for the ride. The team rode in Kaibob National Forest around the Grand Canyon’s East and North Rim; Barracks Slot Canyons in Mt. Carmel Junction Utah; Red Canyon, part of the Dixie National Forest outside Bryce Canyon; Thunder Mountain, Utah and intended to finish in Red Cliff Desert Preserve in Utah when Kricket exhibited some colic symptoms and forced a reroute to a veterinary hospital in Las Vegas. (Kricket made a full recovery and returned home with no further issues!)

Posted by The Mini Adventures of Kricket on Thursday, August 30, 2018

“We planned the entire trip thanks to the Facebook group Horse Trails and Camping Across America,” Joines states. “I recommend that group to anyone planning a long trail ride. Everywhere we rode was public land that anyone can ride on, which is awesome.”

Joines never intended to turn Kricket into a viral star; she considered the Facebook page simply a fun way to chronicle her progress with her mini. That said, she’s happy that she can inspire others to try something different, and maybe hit the trails with their own miniatures.

“Kricket wants to be on the trail. We do show a little bit — her first halter show was memorable when she reared and screamed at the judge — but ultimately she really likes to be out on the trail.” 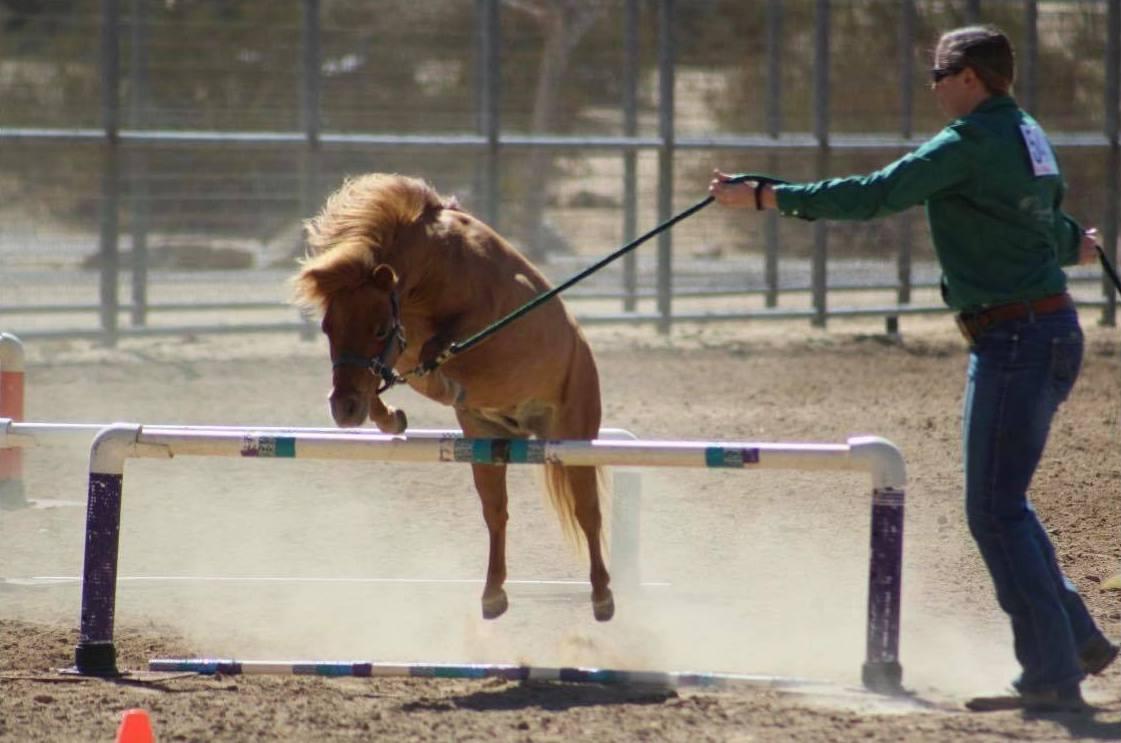 Kricket jumping at a show.

What’s next for this pair?

“I’d love to get through some limited distance races — those are 25 to 30 miles. I’m sure Kricket can make it as long as I get her conditioned… but I’m not sure if I can. So on that note, I entered my first ultramarathon for December to challenge myself and get stronger.” Run Motivators is also issuing a 1200 mile challenge for 2019 — 100 miles every month. Joines hopes she and Kricket can complete that challenge. 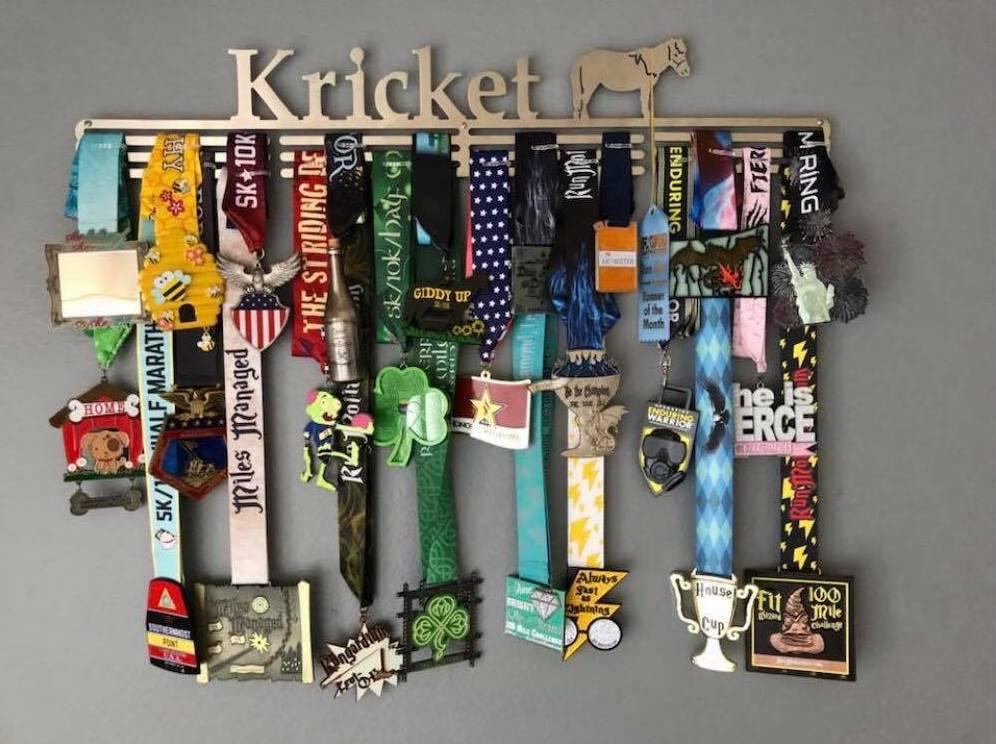 Above all else, Joines and Kricket simply have fun. And shouldn’t that be what it’s all about? 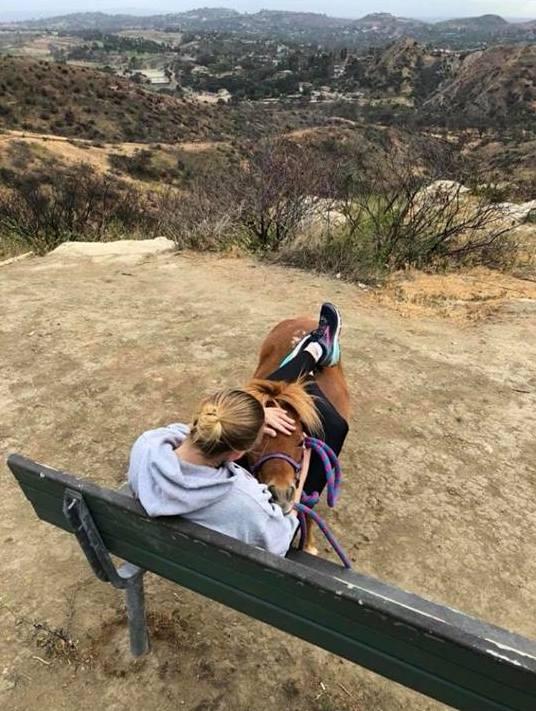