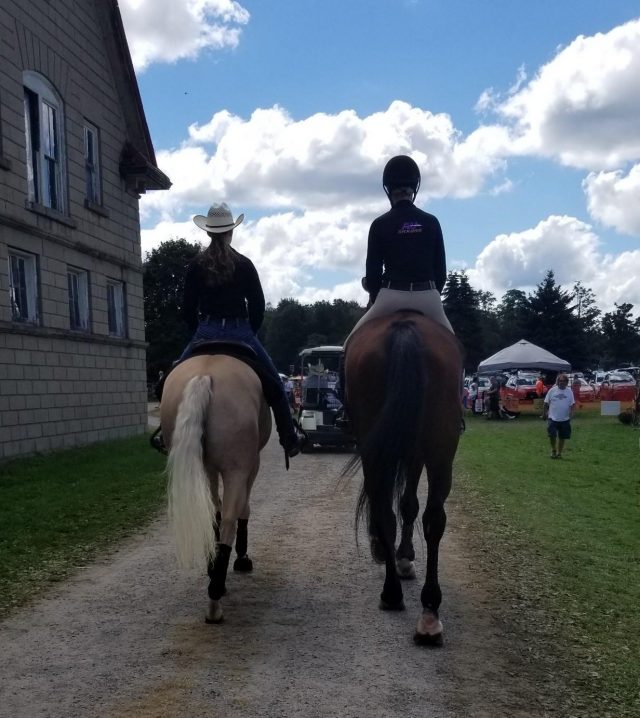 Haley has some eye-opening interactions with the public while on horseback. 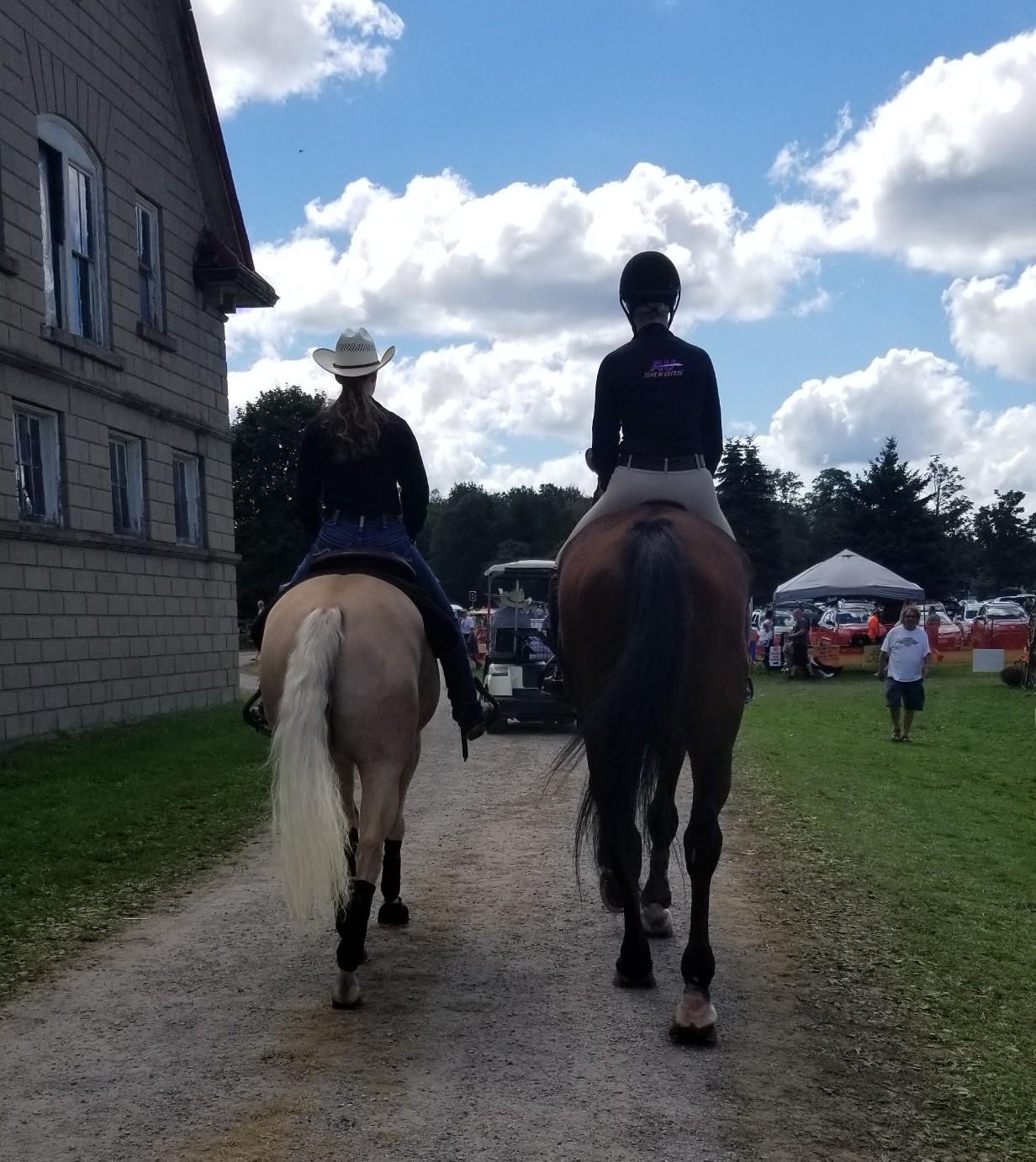 This past weekend, Alfred University was invited to give a riding demonstration at the Cuba Garlic Festival, an annual event that showcases the culture and local businesses of Allegany County. While the festival usually showcases a petting zoo, pony rides, and mounted shooting demonstrations, the general draw is for music, garlicky foods and shopping. There are rows and rows of tents set up, live music, smoke from various cooking tents and people packed in everywhere. A beautiful old barn is the centerpiece of the property, and also acted as a barrier between the chaos of the market and the arena where we rode.

My coaches chose to bring a reiner and a jumping horse to display the different disciplines in a way that would be discernible to the general public. I rode Sunny, a flashy palomino reiner with a long mane. One of the hunt seat team captains, Emma VanDyne, rode another school horse, a huge jumper named Wilbur. They made an odd pair on the trailer — compact Sunny was dwarfed by Wilbur, who took up two trailer stalls by himself. In the grass arena, I was limited as to what maneuvers I could perform, and we kept the jumps low for extra safety, but the crowd and the noise of the venue put us all a little on edge.

Bringing horses to a non-equestrian event is always nerve-wracking, especially when the event is the kids-running-everywhere, beer-at-10 AM kind of festival. The Friday morning before the festival, Sunny braved a walk through the grounds in the predawn fog to show off his spins for fifteen seconds on Channel 2 News, then had the honor of receiving nose scratches from the Garlic King and Queen, outfitted in full royal regalia complete with crowns and capes. On both Saturday and Sunday, we had a crowd watching us warm up before the demo started.

Creating a safe, engaging environment for people to learn about horses in a short time period as a promotion for Alfred University was a challenge in such a crowded place. “Are you going to jump the hurdles?” a boy yelled to me, leaning on the fence as I loped by. Another asked how tall the jumps go, and which horse could run the fastest. One man tried to hand his baby up to me on Sunny for a pony ride, and a woman grabbed his rein (while I was on him) to hold him closer to her for a picture. Before our demo, we rode around the outside of all the tents and vendors, following our coach in a golf cart to clear the people away from us. Even as we rode through, the crowd filled back in behind us, largely heedless of our calls to give the horses some space. Despite their body language — flared nostrils, wide eyes, heads held high and ears swiveling to catch every noise — many people strolled right by, not going out of their way to give the two geldings a wide berth.

With the increasing disconnect of the average person from horses and the farming lifestyle, people seem to be less aware of their surroundings when there are horses present. Although the horses were universally appreciated, I felt a little blocked in by the bystanders, always aware that if Sunny spooked, there wasn’t a whole lot of room for him to maneuver without potentially running into someone. The two geldings, used to the bustle of a show environment, kept it together and accepted the banjo music and screaming kids without any major issues.

The tendency to brush by the horses or crowd close to pet them and stand within range of their hooves made me wonder if equestrians across the board are more aware of their surroundings than non-horse people. Have all the horses we’ve led and all the times we’ve navigated through a herd translated into interaction with herds of people as well? Are we always, on a subconscious level, listening for hoofbeats or fast footsteps no matter where we are?

Once we learn to pay attention at the barn, I think some of that diligence sticks with us and makes us more aware of people half a step too close to the back of a horse or in the way of someone on foot. At some point in all the times we inevitably get stepped on, we learn to look out for our feet wherever we are, and we start noticing more when people lack that instinct for distance and spatial awareness. Luckily for everyone this weekend, both horses involved were quiet and friendly enough to take the commotion in stride, but it was an eye-opening experience as to the different ideas of boundaries people operate under.