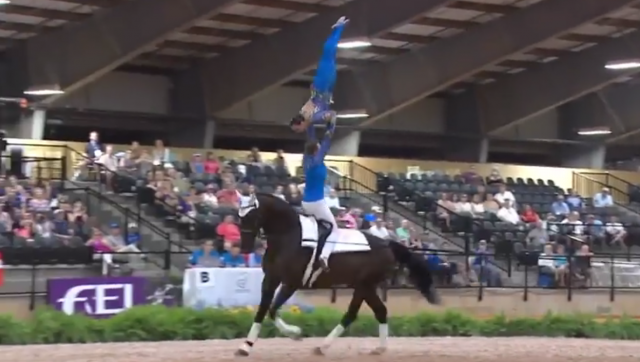 If we jokingly call dressage “competitive horse dancing”… then what should we call this mind-blowing vaulting performance? Check out the winning pas de deux from yesterday’s vaulting championships at the World Equestrian Games!

While the World Equestrian Games might immediately conjure the mental image of eventers, show jumpers and dressage putting everything they’ve got into their performance, the competition is also one of the most visible platforms for the unique discipline of vaulting.

Part gymnastics, part horseback riding, vaulting is performed individually, in a pair or in a squad. The horse, of course, is a critical part of the whole equation, cantering along under the guidance of a skilled lunger with a consistent, balanced gait as the vaulters perform their feats over his or her back.

One word to describe this display…Stunning ? ?A performance that fully deserved a gold medal. Having been out over the last year with a broken leg, Lorenzo Lupacchini comes back strong to join his partner Silvia Stopazzini to show an energetic and incredible show. ? Silvia Stopazzini & Lorenzo Lupacchini ??? Jasmin Lindner & Lukas Wacha ??? Janika Derks & Johannes Kay ??