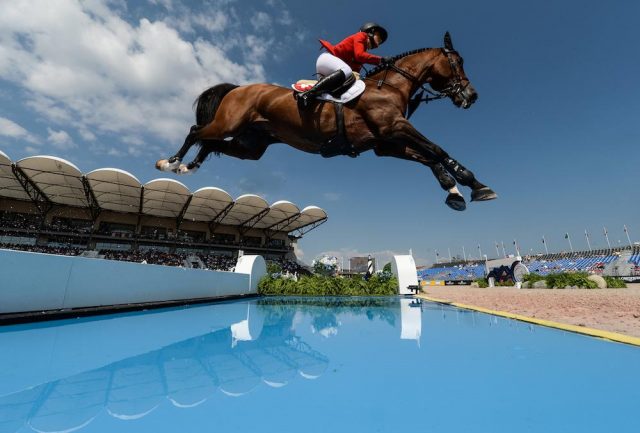 Three disciplines, one pint-sized recap to get you all caught up on the day’s events. Biz Stamm is your bartender this evening for WEG Happy Hour! 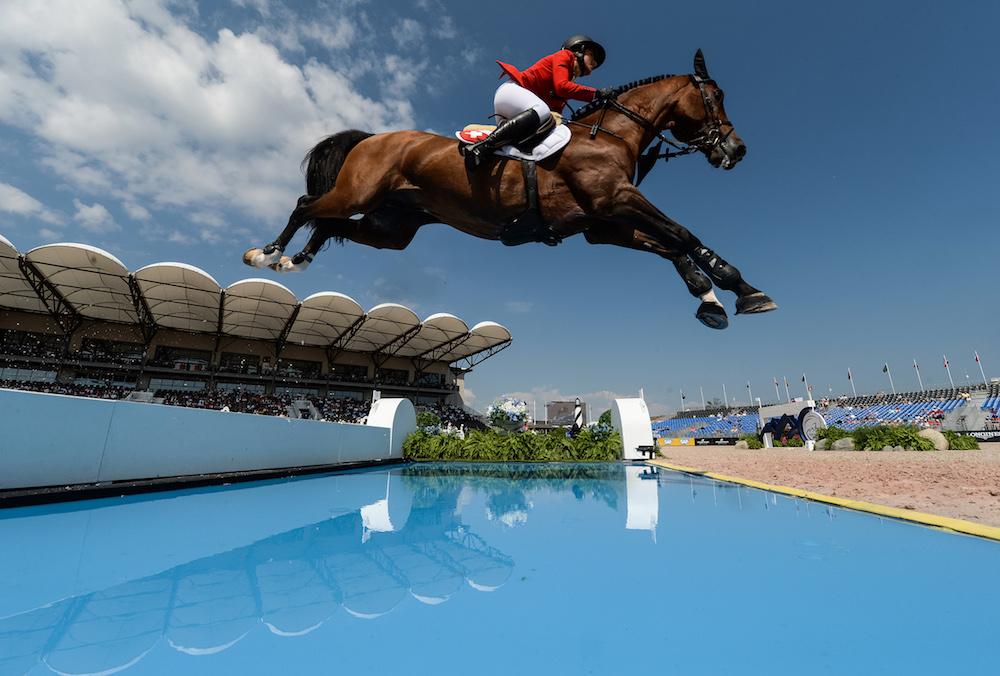 Rails were dropping like it was hot (and it was) in day 2 of show jumping.

Alan Wade’s challenging track produced just a handful of clear rounds, really shaking up the leaderboard. Speed round winner Steve Guerdat picked up four faults dropping him down to eighth position while Italian rider, Lorenzo de Luca, rode a fast double clear to move from ninth to first. Veteran U.S. team rider McLain Ward left all the rails up and only picked up a single time penalty to move into second place. His teammate, WEG rookie Adrienne Sternlicht, also had a successful round, picking up just one time fault, putting her in twelfth position and taking the U.S. team from fourth to second!

The Swiss team remains in first place, though less than one fault separates them and the U.S. promising to make tomorrow a real nail-biter! With a full day of jumping ahead us tomorrow, it’s still anyone’s game in the team competition.  Get caught up on WEG show jumping results here for the individual competition and here for the team competition! Also be sure to check in with our sister site, Jumper Nation, for even more coverage of show jumping at WEG 2018!

The grade II, IV, and V para dressage riders started off the team competition. Stinna Tange Kaastrup from the Netherlands and her gelding, Horsebo Smarties, stole the world’s heart after winning the grade II individual competition and she stole the show again today landing on top of the grade II team riders. In addition to Stinna, several of the other powerhouses from the individual tests were also forces to be reckoned with in the team competition, including Sophie Wells of Great Britain and Sanne Voets of the Netherlands. With grade I and grade IIIs still to go tomorrow it will be interesting to see how shake out, but there is no doubt that the Dutch team is looking strong! Check out the results for the para dressage team competition here!

Para is all about the love! I got seriously emotional listening to the Wednesday 2018 WEG Show on Horse Radio Network.  The riders have so much love for their horses, and the gratitude they have for their mounts is something all equestrians should take to heart. It was also lovely to hear how supportive they are, not just their fellow teammates, but the other competitors as well. You can check out these awesome interviews with U.S. para riders and stay up to date with everything WEG by checking in with our friends over at Horse Radio Network. (Also be sure to tune in for the Horse Nation segment every Monday on HRN’s Horses in the Morning.)

Italian vaulters sambaed their way to gold in the pas de deux. The Austrian team was looking to defend their world title, but they were beat out by the Italians and their energetic, samba-based routine. The Germans were dominant in the other three vaulting events, taking the top spots in all but the male individual competition where French vaulter, Lambert Leclezio is in the lead. He has three Germans hot on his trail and hungry for gold, however.

Remember to never WEG and drive and be sure to always choose a WEGsignated driver.