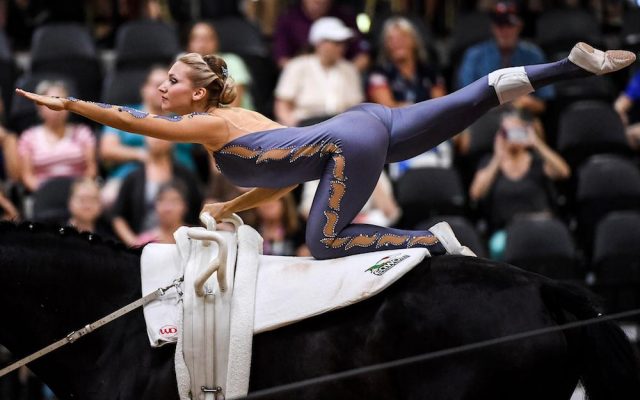 The action is heating up in Tryon with three disciplines on the schedule today: get the pint-sized recap on the day’s vaulting, jumping and para-dressage action at the World Equestrian Games! 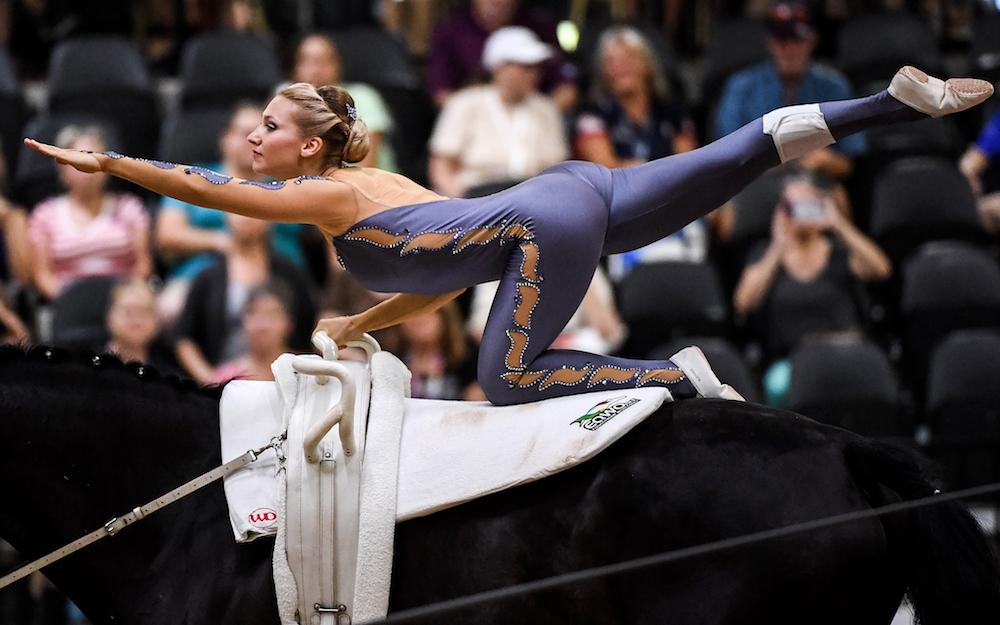 The inaugural Vaulting Nations Cup Team Championship has gone to Germany. When you watch clips of their performance below, you’ll understand why. Part acrobatics, part gymnastics and 100% skill, the well-executed routines impressed both judges and fans. [Germany Celebrates Perfect Performance]

Somebody give us CPR…because that was BREATHTAKING ? ?It was the closest thing we’ve seen to a faultless performance from Team Germany in the inaugural FEI Vaulting Nations Cup Team Championship at Tryon2018. They showed some superb acrobatics and beautiful theatrics – what more could you want? ? Deutsche Reiterliche Vereinigung e.V. (FN) / Team Germany ??? SVPS – FSSE / Team Switzerland ??? Team Austria ??

Rebecca Hart became the first US rider to earn a medal in Para-Dressage, winning Grade III individual bronze. Her mount El Corona Texel was competing in his first ever championship, impressively as were several of the other winning horses. Overall, the para-dressage riders have been totally rocking competition with horses that might be on the biggest stage of their lives, and to watch the performances is to be inspired and reminded that there is no limit to what is possible on horseback. [Hart Wins First Ever WEG Para-Dressage Medal For Team USA]

An impressive 124 entries faced off in today’s speed round, kicking off the show jumping phase of the World Equestrian Games. The United States currently rests in fourth place with three more rounds of jumping to go over the next four days; McLain Ward and Clinta are the highest-placed US individual pair in eighth. With plenty of jumping to go, strategy will become important; Team USA, which also includes Laura Kraut and WEG rookies Devin Ryan and Adrienne Sternlicht, have plans in place for tomorrow. Catch plenty of post-round interviews here. [FEI World Equestrian Games Tryon 2018: Show Jumping, Day One]

Plenty of riders are making their world championship debuts in Tryon; Chronicle of the Horse caught up with four of them after today’s show jumping speed round. Get the scoop on the horses, the nerves, representing their home countries and the thrill of riding at the World Equestrian Games, these four rookies — including Japan’s Karen Polle, Canada’s Erynn Ballard, USA’s Devin Ryan and Macedonia’s Luka Zaloznik — share all. [Four First-Times From the FEI World Equestrian Games]

Horse and Hound’s Polly Bryan describes why she has a soft spot for para-dressage: “It can be a tricky sport to understand and follow, with athletes split into five grades according to their disability, and the individual, team and freestyle championships to make sense of. But those who choose not to get involved are missing out — especially the media. Para dressage is the dream sport for a journalist — our job is to hunt out the very best stories, and convey the drama of the action, and here is a discipline absolutely bursting at the seams with drama, emotion and characterful competitors.” Read the rest of her excellent editorial. [Polly Bryan’s WEG blog: why para dressage is the dream sport]