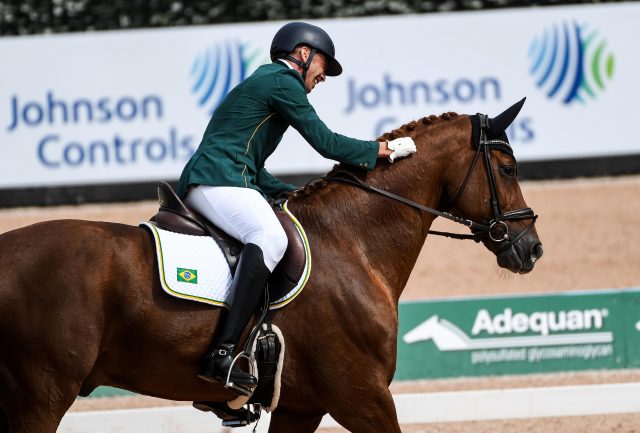 Today kicked off the individual competition for para dressage and vaulting, making poise and elegance the theme of the day. 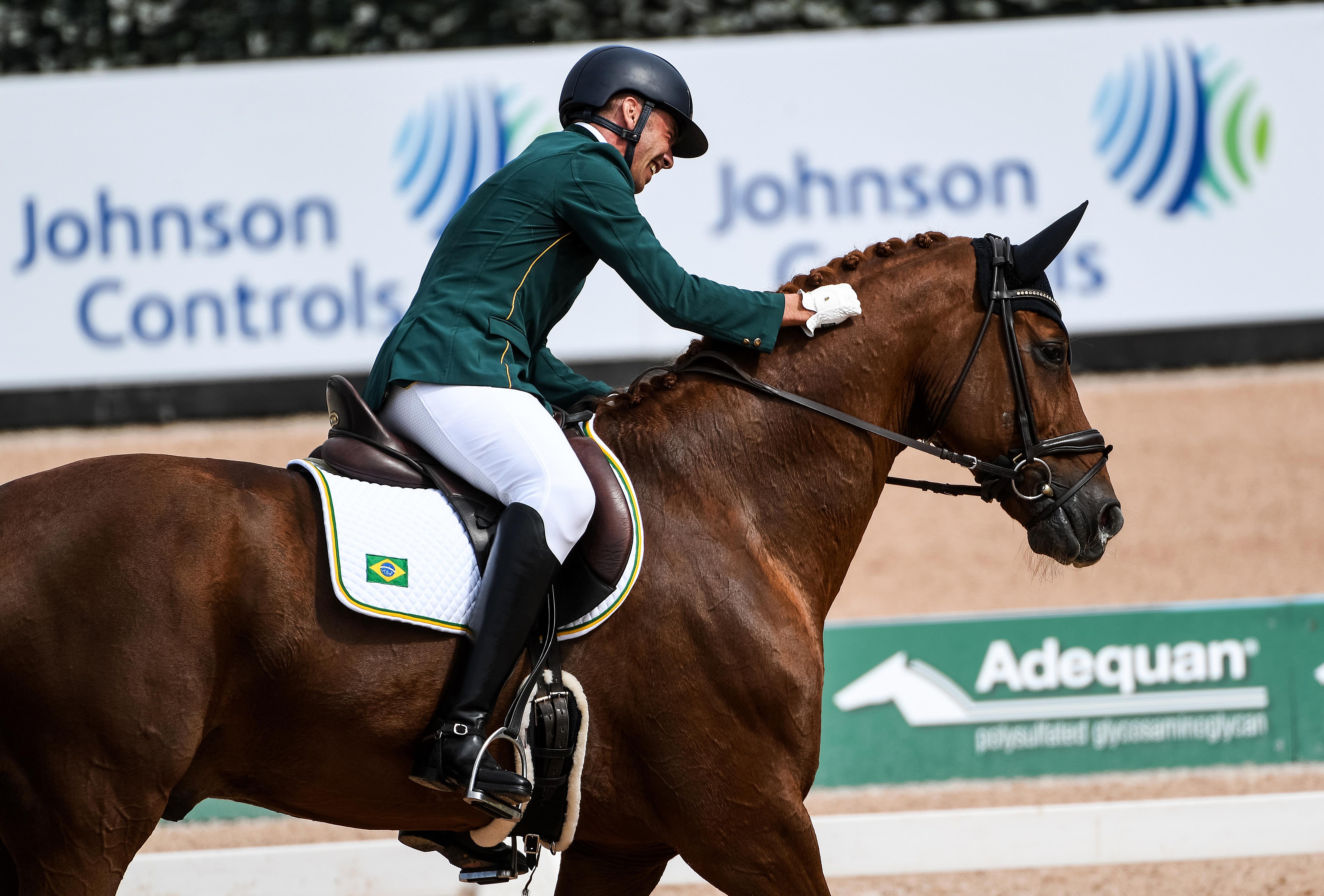 The competition was hot for the grade IV para dressage individual test, with the top three riders all within less than a single percent of one another. Sanne Voets of the Netherlands clinched the gold with a stunning performance on her 10 year old KWPN gelding, Demantur N.O.P. Voets finished just out of the medals for the individual test in Rio, making this gold extra sweet! Right on her heels, taking the silver was Rodolpho Riskallo of Brazil on Don Henrico, a 15 year old Hanoverian stallion. It was a repeat of WEG Normandy for Danish rider Susanne Jensby Sunseen, who again walked away with the bronze aboard Csk’s Que Faire, a 20 year old Danish warmblood mare. See the full results for the grade IV para dressage individual test here!

In a disappointing turn of events, grade II para dressage favorite, Lee Pearson of Great Britain made the last minute decision to pull his horse from the individual competition. Though she had no visible signs of injury, Lee felt something was off with his 9 year old mare, Styletta. He posted the following statement on his Facebook page regarding his decision to withdraw.

“Thank You for all the lovely messages of support about today’s competition.

? Sometimes you have to make a decision that you don’t want to and think of the long term bigger picture. I wasn’t prepared to push a horse I love when she blatantly wasn’t happy with something, even if it is the World Games. We’ve found nothing wrong with her but I do feel the 40* heat and humidity is not helping her. We train tomorrow where we’ll be assessing her closely and possibly compete in the team test on Thursday.  Unfortunately due to retiring today we can’t campaign the freestyle to music on Saturday which if she’s ok is a shame. I live to fight another day

Props to Lee for putting his horse first and we at Horse Nation are sending some positive vibes to his girl, Styletta.

One could quite literally say they saved the best for last in the grade II para dressage individual test. It’s a lot of pressure being the last rider in your class, but Denmark’s Stinna Tange Kaastrup didn’t buckle, putting in a stellar ride on the 17 year old Danish warmblood gelding, Horsebo Smarties, to take gold! The difference between gold and silver came down to less than three tenths of point! Hot on her heels to take the silver was Pepo Puch of Austria on the 10 year old Hanoverian gelding, Salior’s Blue. Taking the bronze was Dutch rider, Nicole Den Dulk, and her 15 year old KWPN gelding, Wallace N.O.P. See the full results for the grade II para dressage individual here!

Great Britain’s Sophie Wells definitively took the gold in the grade V individual test. Repeating her individual gold medal performance from Rio and further solidifying her number one world ranking, Sophie and her 11 year old KWPN gelding, C Fatal Attraction took the win with a 75.429. Taking Silver was Frank Hosmar of the Netherlands on his 13 year old KWPN gelding, Alphaville N.O.P. In the bronze medal position was Regine Mispelka and her 13 year old Rheinlander gelding, Look At Me Now. See the full results for the grade V para dressage individual test here!

It was compulsory day for the male, female, and squad vaulters! Can I just say that as someone who struggles to walk from one room to the next without tripping, the vaulting is completely mind-blowing! It appears the Austrian women are playing to win with with Katharina Luschin, Daniela Fritz, and Lisa Wild in the first, third, and fourth position respectively of the women’s individual competition. Rounding out the top five is Kristina Boe of Germany in second, and Sheen Bendixen of Denmark in fifth. See the full results here!

Thomas Brüsewitz of Germany put in a beautiful performance to take the overnight top spot in the men’s individual vaulting. His German compatriots also had a successful day,with Jannik Heiland landing in the number two spot, and Jannis Drewell in fourth. French vaulters, Lambert Leclezio and Vincent Haennel took the third and fith place positions and you can bet that they’ll be fighting for a spot on the podium in days to come! See the full results here!

The Swiss squad is sitting in the top spot after the compulsory round with the Germans close behind in second! The Swiss and German squads dominated the compulsory round, leaving a large margin between the top 2 spots and the rest of the top 5. The Austrian, U.S., and Italian squads comprise the rest of the top five. While the Swiss and Germans appeared  dominant on day one, I wouldn’t count any of the top squads out for a chance on the podium! Check out the complete squad compulsory results here!

If you would like to get a deeper appreciation of just how skilled our WEG vaulters are, check out this video of two non-vaulters giving it a try!

That’s it for today! As always, enjoy your WEG responsibly!