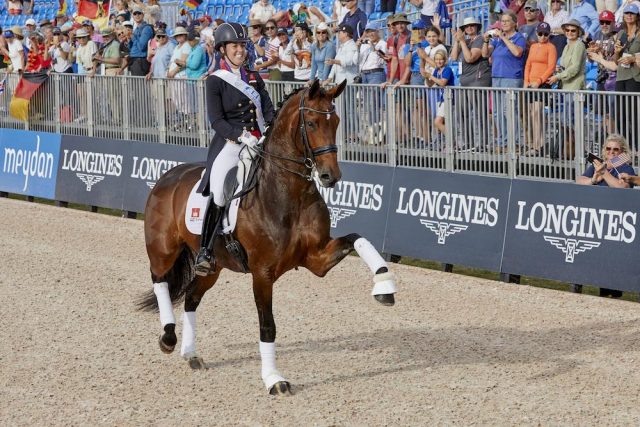 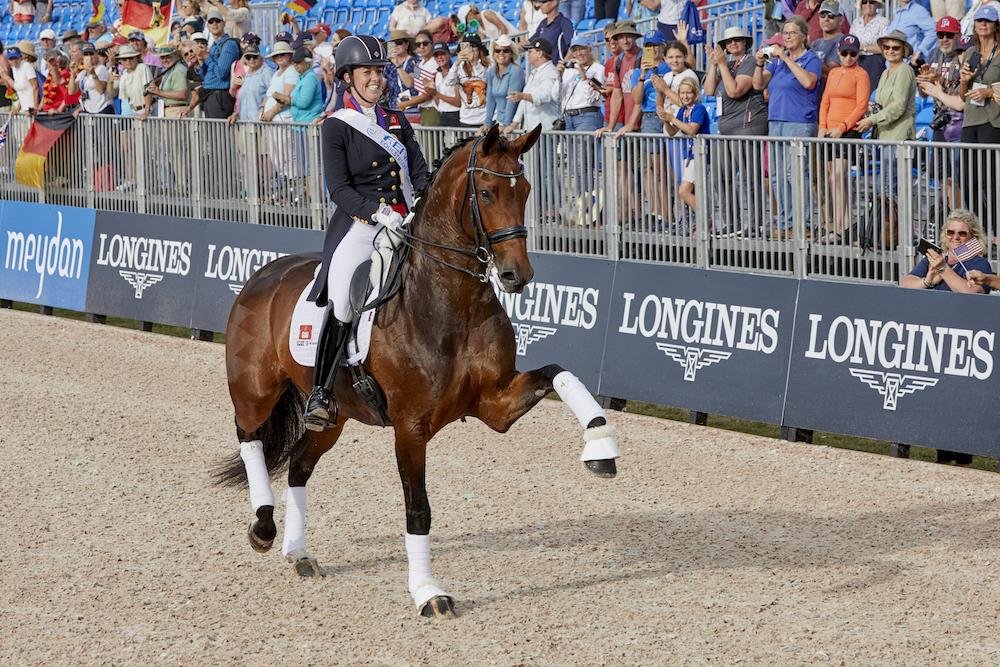 Get the pint-sized recap of the day’s goings-on at the World Equestrian Games!

Another whirlwind day in Tryon, North Carolina: get the scoop on breaking schedule changes based on the weather forecast, updates and the press conference regarding Wednesday’s endurance fiasco, and of course the big movers and shakers in today’s pure dressage individual finals and eventing dressage!

Sunday’s events have been pushed to Monday and changes have been made to Saturday’s schedule in reaction to predicted bad weather from Hurricane Florence. While Tryon has been radio silent about weather preparations and accommodations since Tuesday, a released statement announced that Sunday’s eventing stadium jumping would be moved to Monday in hopes of better conditions. Based on further weather updates, the dressage freestyle individual finals are also intended to move to Monday. Saturday’s cross country is expected to run as scheduled but the interval between riders has been shortened from four to three minutes; the reining individual finals will run at 3 PM. [Update on Rescheduling of Tryon 2018 Weekend Timetable]

Isabell Werth of Germany was again unstoppable in the Grand Prix Special, taking home another gold medal. She earned her first individual medal since 2006 at a world championship aboard her once-retired Bella Rose 2. But USA’s Laura Graves and Great Britain’s Charlotte Dujardin put the pressure on: Graves and Verdades danced for the home crowd in their second WEG, and Dujardin and Mount St. John Freestyle floored everyone in the duo’s first world championship and fewer than ten Grands Prix to the mare’s name. [Werth Makes Good On A Promise With WEG Grand Prix Special Win]

In a press conference held today to discuss Wednesday’s abandoned endurance race, it was announced that a New Zealand horse had been euthanized. The horse Barack Obama was treated for kidney problems after the second loop of Wednesday’s 120-kilometer race, then transferred to Tryon Equine Hospital as soon as rider Jenny Champion sensed his distress. The horse’s owner, in consultation with Champion and the veterinary team, made the decision to euthanize today. The FEI emphasized in today’s press conference that the decision to cancel the endurance race was made for equine welfare, with over 50 horses in the 95-horse field receiving veterinary treatment during or after the race. [New Zealand Horse Euthanized Following Abandoned WEG Endurance Race]