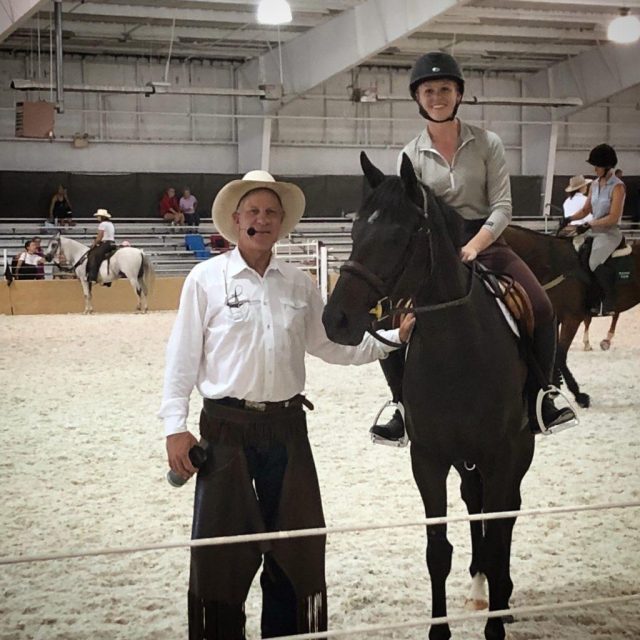 Meagan DeLisle recently took her jumper prospect to a clinic with renowned natural horseman Buck Brannaman. Here’s her full account of the experience!

Country music played over the intercom as I entered the crowded arena at the National Equestrian Center. At least two dozen people donning chaps and cowboy hats were guiding their horses dressed in western tack in small circles, waving brightly colored flags around like orchestra conductors.

“I am totally out of place,” I thought as I made my way through the crowd in tall boots and Tailored Sportsmans. My Amazon-special “mustang training flag” felt foreign in my hand as Flash followed along beside me, completely oblivious to the commotion all around us.

I have admired Buck Brannaman ever since stumbling across his documentary one Saturday morning after searching for the key term “horse” on Netflix. Captivated by his story, I added a couple of his books to my reading list and found myself in awe of how he could take a half-wild colt and build a connection with it strong enough to saddle up for the first time in just three days. Of course, I have always had some reservation about some of these “natural horsemanship” gurus and have wondered what was real and what was just a really good gimmick. But with Buck, I felt he could be the real deal. So when the opportunity came open to participate in one of his Foundations classes at a clinic just a few hours north of me, I jumped at the opportunity. If anything, it would be a great off the farm experience for Flash in preparation for the RRP Thoroughbred Makeover.

But as I staked out a place in the center of the ring where Flash and I could safely park, I felt a tad overwhelmed. Many of the participants in my class had been following Buck all summer long, perfecting their skills at each stop along the way. Here I was with no clue what the training flag was for and how the heck I was supposed to use it.

When Buck entered the ring each day, the casual chatter from the crowd would grow quiet.  Not only was my class much larger than expected (26 horses in one ring was quite a lot of stimulation for my little baby racehorse) but the turnout of spectators was very impressive. The stands were packed tight with horse lovers of all ages, many with pen and paper in hand ready to scribble down every piece of wisdom that Buck would share. The man, the myth, the legend: Buck Brannaman. Photo by Meagan DeLisle

If I am being honest, I walked into this clinic unsure as to if I would learn anything I would consider truly applicable to the way I ride. Much of the hunter jumper community doesn’t practice the art of groundwork or as some may call it “natural horsemanship,” and I had heard my fair share of jokes on the subject. I had no clue how the weekend would play out or if I would gain anything from it, but I was looking forward to giving something new a try and ticking a box off of my checklist of things I wanted to do at some point in my life.

Imagine my surprise when on day one, I was utterly overwhelmed by the groundwork exercises Buck demonstrated for us and then sent us out on our own to practice. Flash did his best to try and understand what I was asking for as I tentatively shook my flag alongside his shoulder, but I found myself growing a hair frustrated. Buck had made it look so easy.

Each night Buck assigned us homework, and thankfully our clinic host, Trent Hayden of Honey Creek Ranch, was more than willing to help a girl out. After about an hour of confusion and several backward steps on Friday evening, I felt a smile crawl over my face as Flash moved his hindquarters to the side, then crossed over with his front quarters and made his way around the track at a casual walk.

It sounds so easy and when I came home and demonstrated the exercise to my husband, he furrowed his brow a bit and said, “wait… that’s it? That’s what had you so confused?” But getting your body to reflect the message that you are the leader and that this is what you want the horse to do is the biggest challenge.

On days two and three after a bit of groundwork, we tacked up and put the skills we were praciticing to the test. Our homework consisted of lots of circles, stretching the neck and using a soft feel with our hands. I struggled with the idea of the soft feel until the final day when it clicked with me: Buck’s soft feel is basically our connection. It is having a gentle yet constant contact with the horse’s mouth and rewarding them with a release when they are good, just on a longer rein when in the western saddle. When we started working on backing up, Flash began to grow nervous and anticipated my every move. Granted, he has never worked in an arena with this many horses before and all around us horses were dancing around, backing up all over the place. The more Flash grew worked up, the more he began to shut down, so I made my way over to Buck to get his advice.

Buck encouraged me to incorporate small, tight serpentines into our routine anytime Flash grew anxious, as the exercise would not only get his mind off of his frustration but also get him back to listening to me. I thanked Buck and walked away with a smile when he said, “I really like that horse. That is a good looking horse!” A sense of pride swelled up inside of me. I have had several people compliment me on my little $800 racetrack reject, but to have someone of an entirely different discipline and of Buck’s caliber acknowledge all of the hard work I have put into Flash was very rewarding.

When the third day concluded, I realized just how much Flash had grown over the extended weekend. I have always struggled with getting him to move off of his hindquarters, something we definitely need to open and close gates in both field hunters and trail, but by the end of three days he was spinning around on one hind leg like he was born to do it. My once over-cuddly and sometimes pushy horse could now respectfully and patiently stand a few feet away from me for hours on end, and he began listening to my body more, on the ground and in the saddle, helping us to perfect our leads and transitions.

I walked into this clinic unaware as to if I would gain anything from it and I walked away having learned so much that I knew I would have to do it again. I am beyond excited to use these exercises and more on all of my horses to strengthen their foundations and get us in tune with one another. Three days with Buck Brannaman definitely made me realize there is a huge gap in the majority of hunter jumper training programs where this information isn’t taught. It isn’t magic, it isn’t gimmicks, it’s horsemanship at its finest. It is listening to and understanding your horse. It is having a relationship with them in and out of the saddle. “The two most important things with horses are discipline and love… and that doesn’t make me a sissy“- Buck Brannaman.