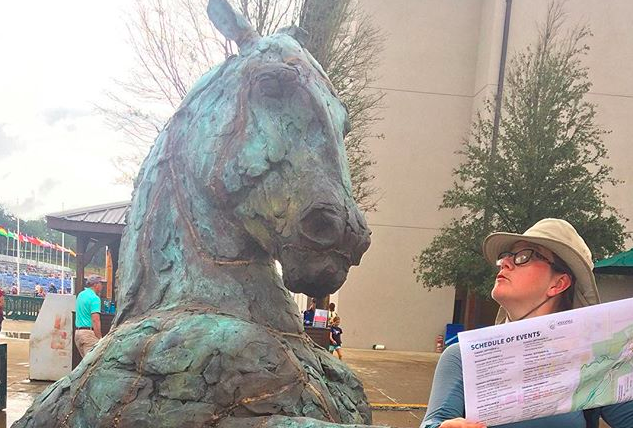 Catch all the sights and sounds from Tryon, North Carolina, host of the 2018 World Equestrian Games!

The World Equestrian Games is always a roller coaster, but this particular Games has been fraught with emotion from well before the beginning: would the facility be ready in time? Would Hurricane Florence be the ultimate party crasher? While the cancellation of yesterday’s endurance ride was absolutely devastating to the athletes and support teams who spent literal years getting ready, the show must go on with reining, dressage and eventing all in full swing.

Here are some of the behind-the-scenes highlights from WEG!

When I think about multiple dressage rings going today (both for team pure dressage, as well as eventing dressage) the first thing that comes to mind is this scene:

I jest, I jest. But yes, there are two kinds of dressage going today!

A stunning test from @HesterDressage & Hawtins Delicato as they receive a confirmed score of 77.283% to push GBR to the top! ??#Tryon2018 pic.twitter.com/osZKmW7A9i

This reception from the crowd is thoroughly deserved ??@JK_Eventing & Chipmunk FRH finish their round with an amazing 19.9 penalty points and take the lead in the #Eventing Dressage!#Tryon2018 #BeOne pic.twitter.com/RVgshFnfrG

There’s plenty to celebrate — seeing nations with a developing international equestrian presence shine is one of the reasons we love the World Equestrian Games!

We love records. Daniela might not be in the lead but she will have this record to be proud of for at least another four years. Well done! #Tryon2018 pic.twitter.com/FB6lqRywCi

18-year-old Cade McCutcheon, currently the individual reining leader marking a 229 aboard Custom Made Gun, speaks frankly in the mixed zone about the nerves that come with riding not for yourself or your family, but for your entire nation. While McCutcheon certainly has the “pedigree” to be a reining superstar, it’s still just his first World Equestrian Games, and he’s stepped up the plate!

Live in the Mixed Zone with Cade McCutcheon after his first ride at #Tryon2018 earning a personal best score of 229 and taking the lead ? #USAReining

A second round of reining is taking place today to determine the field for individual medals on Saturday:

??? & he’s off!! Pierluigi Chioldo has qualified for the final as it stands! Plenty more to come though! #Tryon2018 pic.twitter.com/SXrxTsNNMy

Damp weather isn’t stopping anyone from having a good time — horse people are tough!

And when the sun is out, the spectators are finding plenty of room to enjoy the atmosphere.

Got me a good seat in between interviews… ? #Tryon2018

…as are some Tryon natives:

Despite reports of long lines, expensive concessions and muddy conditions, it does appear that Tryon is working hard to improve what it can, and most spectators are keeping a good attitude:

And our favorite moment of Tryon so far? Whatever is happening here.

A post shared by KRISTY OATLEY australia (@kristyoatleyaustralia) on Sep 12, 2018 at 2:05pm PDT