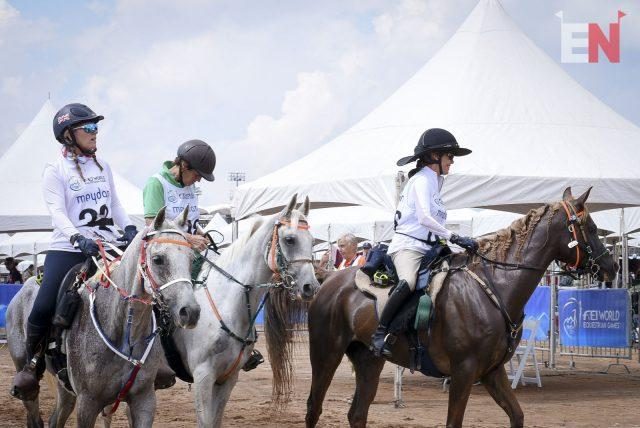 Who took team gold in the reining? How did the first day of dressage go? Why did endurance suffer a false start — and then cancel altogether? Your pint-sized recap of all the day’s goings-on at the World Equestrian Games. 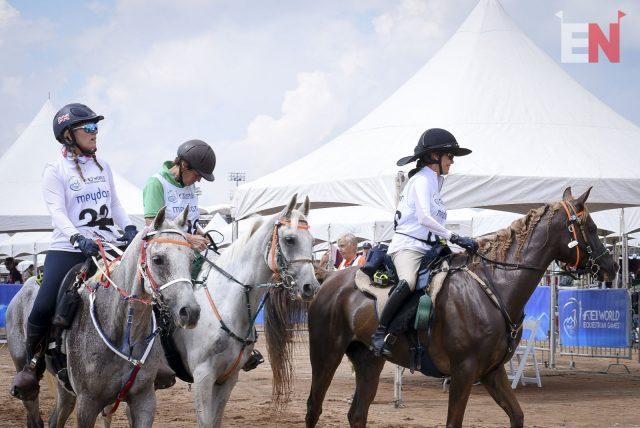 Endurance riders beginning the second leg of the race at WEG. Photo by Shelby Allen/Eventing Nation

A tumultuous first day of competition at the World Equestrian Games in Tryon, North Carolina has concluded. While reining saw a brilliant day of sport in the climate-controlled indoor facility, the endurance race was fraught with controversy and challenge from the beginning, not the least of which was the weather. The first day of team dressage took place as well. Here are today’s headlines, curated for your reading pleasure!

While the eyes of the equestrian world are on Tryon, Tryon’s eyes are on Hurricane Florence. Tryon International Equestrian Center and FEI leadership provided more insight into the facility’s contingency plan in the case of severe weather as a result of Florence. While Tryon is hundreds of miles inland, Florence’s reach is predicted to dump rain and maintain strong winds in the area by Sunday. Our sister site Eventing Nation also published a thorough report on TIEC’s storm plan. [Tryon 2018 Weather Updates]

Controversy ruled the day in endurance, which was ultimately canceled. Numerous factors came together tragically to spell total disaster for endurance: a hot, humid day, the still-not-quite-finished state of the endurance course itself and a large part of the field getting misdirected off-course in the first loop of the race this morning. The FEI made the decision to run as a shortened 120 km track, throwing out the first loop entirely, but by 6 PM announced that due to high heat and humidity, the endurance event was canceled and would not be rescheduled. With the leaders just a few kilometers from the finish, the announcement was met with a near-riot and police were called in to restore order. [FEI Cancels WEG Endurance Mid-Race]

Germany takes the expected lead in team dressage, but plenty of combinations have yet to show tomorrow. Germany is arguably the world powerhouse in dressage, but there’s plenty of competition. Sweden holds strong in the silver medal position and Team USA is currently in third. Team medals will be awarded after tomorrow’s competition. [Germany Remains On Top After Grand Prix Day 1 at WEG, U.S. in Third]

USA had a night to remember in the Team FEI Reining in the first day of the FEI World Equestrian Games at Tryon2018 ?Each member put in a strong performance – but can they keep it up for the Individual competition later this week? ?Team USA / USA Reining ???Team Belgium / Equibel ???Team Germany / Deutsche Reiterliche Vereinigung e.V. (FN) ??

Belgium took silver and Germany took bronze, but it was Team USA leading the way with 18-year-old Cade McCutcheon at the top of the pack with an incredible score of 229. While today crowned the team championship, it also served as the first individual qualifier; tomorrow’s consolation round will allow a few more individuals to the finals on Saturday night.

In the past four years, FEI Reining has demonstrated remarkable growth, with more countries furnishing teams as well as individuals for WEG competition. As the only western discipline at the World Equestrian Games, this all-American sport has taken off all over the world in the 16 years since it was first included.

What is it really like in Tryon? You can follow the headlines, the real-time results, and the (admittedly sometimes spotty) live stream, but if you want to know what it’s like to walk the grounds, look no further than our own Leslie Wylie’s report via Eventing Nation. [Your Real-Talk Spectator Guide to Navigating the WEG]

We’ll be back tomorrow for Happy Hour! Go riding.