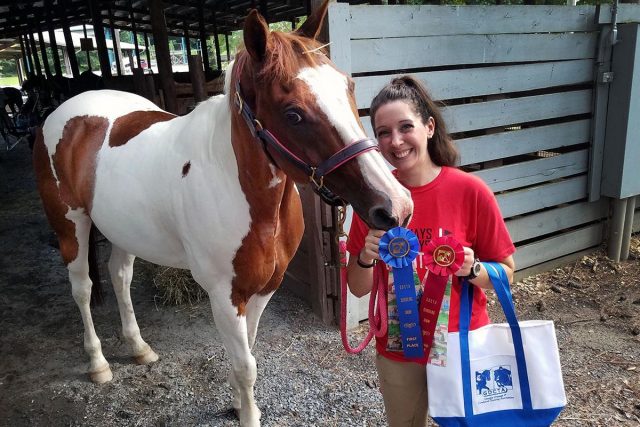 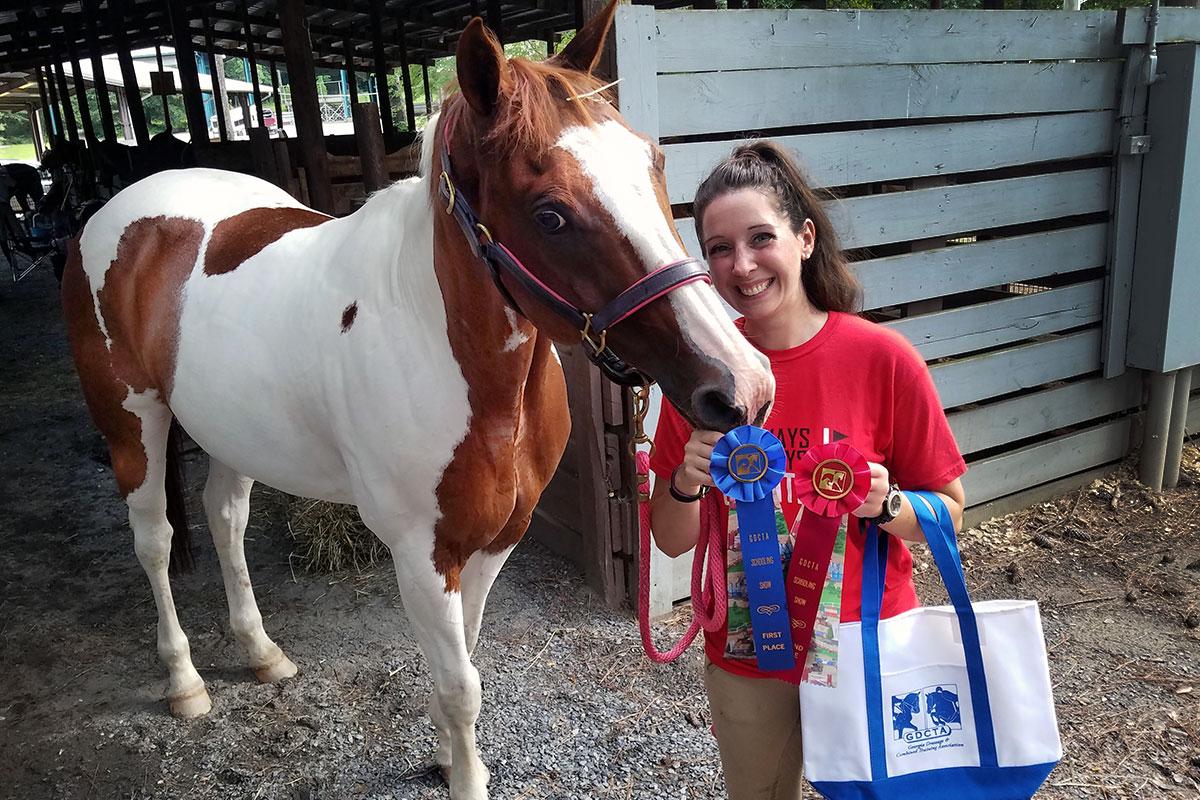 JJ says: those ribbons are mine, does that mean I can eat them? Photo by Erik Jacobs / P.TEN Marketing

After winding up having to go to Urgent Care the night before, today ended on an absolute high note – we got our “first” first place finish!

I went into this with the only goal of finishing on a number for our Novice CT so that we could get our third and final qualifying score for the GDCTA year-end awards. Since JJ and I hadn’t been to Wills Park yet, and I wanted to give him every opportunity to have a positive experience and decided to do a “throwaway” Beginner Novice CT, too, to act as a warm-up and let him see some stuff before the “real” rounds.

JJ and I weren’t scheduled for our first ride until 2:00pm, so I spent the morning loving on him and hanging out with my friends. This event wound up being more like like a social outing than a horse show, as I ran into literally dozens of people that I knew – including some friends from the very first barn I rode at when I first moved to Atlanta over a decade ago!

As the day progressed, it started getting hot(ter) and humid(er). August in Atlanta can be brutal, and I was grateful that dressage warmup was in Wills Park’s massive covered arena. JJ was surprisingly relaxed and chill compared to his mood yesterday where he was somewhat explosive, and we had a nice, stress-free session. Soon, we were called to the arena to do our Beginner Novice dressage test. I thought it went fairly well and that it felt pretty average, so I was pleased.

We had 45 minutes or so before our Novice dressage test, so we headed back to the covered to walk around. JJ scammed a bagel and cream cheese off some random nice lady (watch for an upcoming “Will JJ Eat It?” episode) and even wound up taking a 10-minute power nap as we were parked along the rail (seriously, he fell totally asleep with me on him). With about 15 left before our next test, I woke him up (sorry, bud!) had him do a little trot to loosen up again, a canter each way, and that was that.

As we circled the arena waiting for the bell to start, JJ was feeling absolutely incredible. He was light, he was supple, he was floaty, and we had a lovely contact. After circling a few times, though, I brought him down to the walk. And, at that moment, the judge rang the bell… we picked up the trot again, and absolutely lost everything we had a few moments ago. Oh well, whatever. In we went!

JJ felt like he was bracing against me as we headed down center line and I could feel a lot of tension, but I tried my best to convince him to suck it up and be a partner for the next three minutes or so. We had a bobble where he took a trot step during one of our canter circles (um, why?!) but otherwise we did all we were supposed to and nothing extra. It felt solid, but again, nothing special. After halting, saluting, and exiting, though, my trainer Miriam and my friends were all smiling and telling me that it looked awesome. I didn’t believe them, but appreciated the support anyway.

My first stadium round was scheduled for 4:06pm, so JJ got to snooze in his stall and hang out with his best-friend-the-fan for a bit. About an hour later, we had changed to our jumping tack and were heading back out, and he felt surprisingly lethargic. In the warm-up, Miriam was happy with how relaxed he was but I was concerned with his unusual lack of enthusiasm.

When we headed in for the 2’7″ round, though, he was still feeling uncharacteristically lazy. He had absolutely no motor, none of his usual excited-to-be-jumping attitude. It was WEIRD.

The course itself was straightforward in that it wasn’t very looky, but there were bending lines and a lot of rollback turns so that it was actually technically difficult. JJ said “okay, fine” to everything, but we biffed almost every distance and he even knocked a couple rails (which, fortunately, stayed up). It was extremely unlike him, and I was seriously embarrassed by my riding. It was so bad that I briefly considered scratching from our Novice round, because I wasn’t entirely confident he could do it, or would even want to. 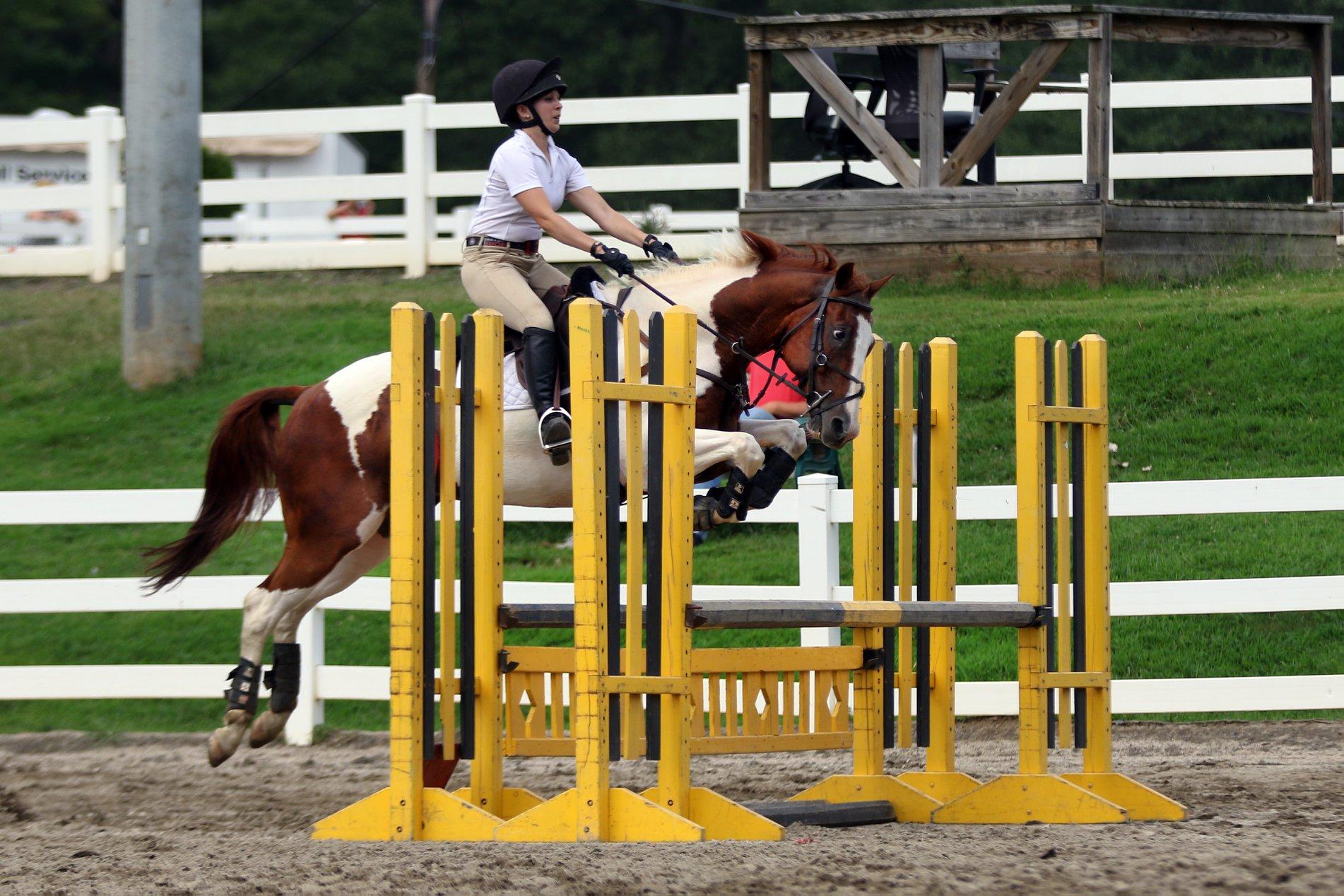 JJ says: “Oh, this oxer is bigger than I thought and I don’t know if I have the energy to do it right… so I’ll just FLING MYSELF AT IT as hard as I can and hope mom stays on.” #ThatWasAwkward #oof Photo by Erik Jacobs / P.TEN Marketing

JJ was absolutely COOKED after the BN round, so we went straight back to the stall to let him get some water, shade, and spend 15 minutes under the hose. I wanted to get his respiration and body temperature down before going again, and I think he was grateful for it. At 4:30pm, I decided we could at least try a Novice jump or two, and I would let him tell me what he wanted. We quickly tacked up again and went to give it a shot.

I didn’t want to wear him out, and considering he was already still warmed up from earlier, so I did only a couple laps around the arena before hitting the cross-rail, vertical, and oxer once each – just to let him know that the heights were now slightly higher. We were ready to get it over with and first on deck to go for the 2’11” group.

Incredibly, JJ was back! He said “heck yes, let’s go!” the moment we started and I had a horse again! Our distances were better, our communication was better, and he didn’t knock a single rail. There was even a big Swedish oxer on our course (first time in 4 years of eventing that I’ve ever had one in competition) and he read it perfectly – I had schooled him over some at home a few weeks ago after not having done one in years and was really grateful for that at that moment! We went double clear, he got tons of “good boy!” pats, and we hustled back to the stabling to get him cooled out and hosed off.

I didn’t even care where we finished, because we had accomplished all I wanted and he tried his best and I was thrilled with that, so when they started announcing results over the loudspeaker I didn’t even hear where they called my name… someone told me we had gotten second in BN, and I was like, oh, okay, cool, whatever. Then, when they announced Novice, my husband was like “OMG YOU GOT FIRST!” and I honestly didn’t even believe him. There’s no way our dressage had been THAT good – but apparently it was, and he was right, and we did!

I really don’t know, but I’m super proud of JJ and totally happy!