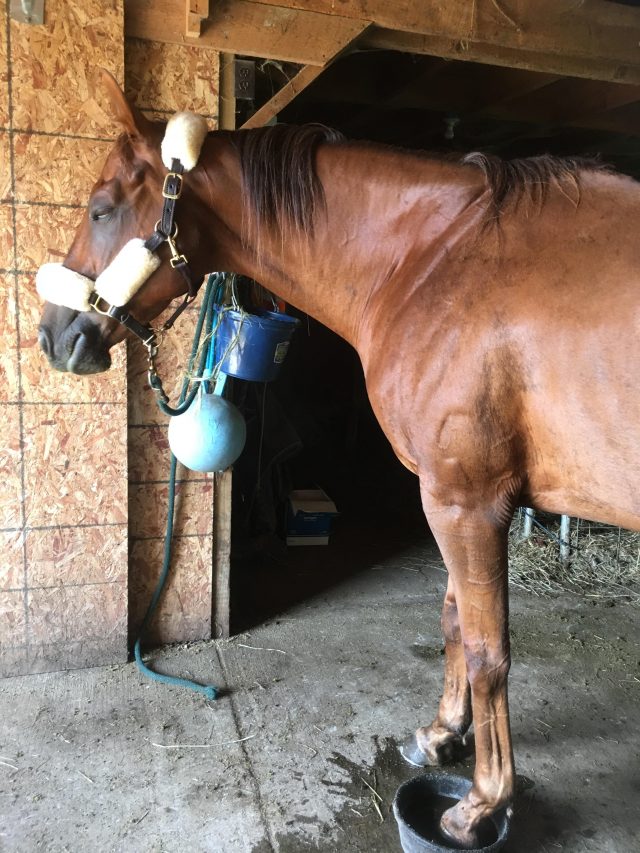 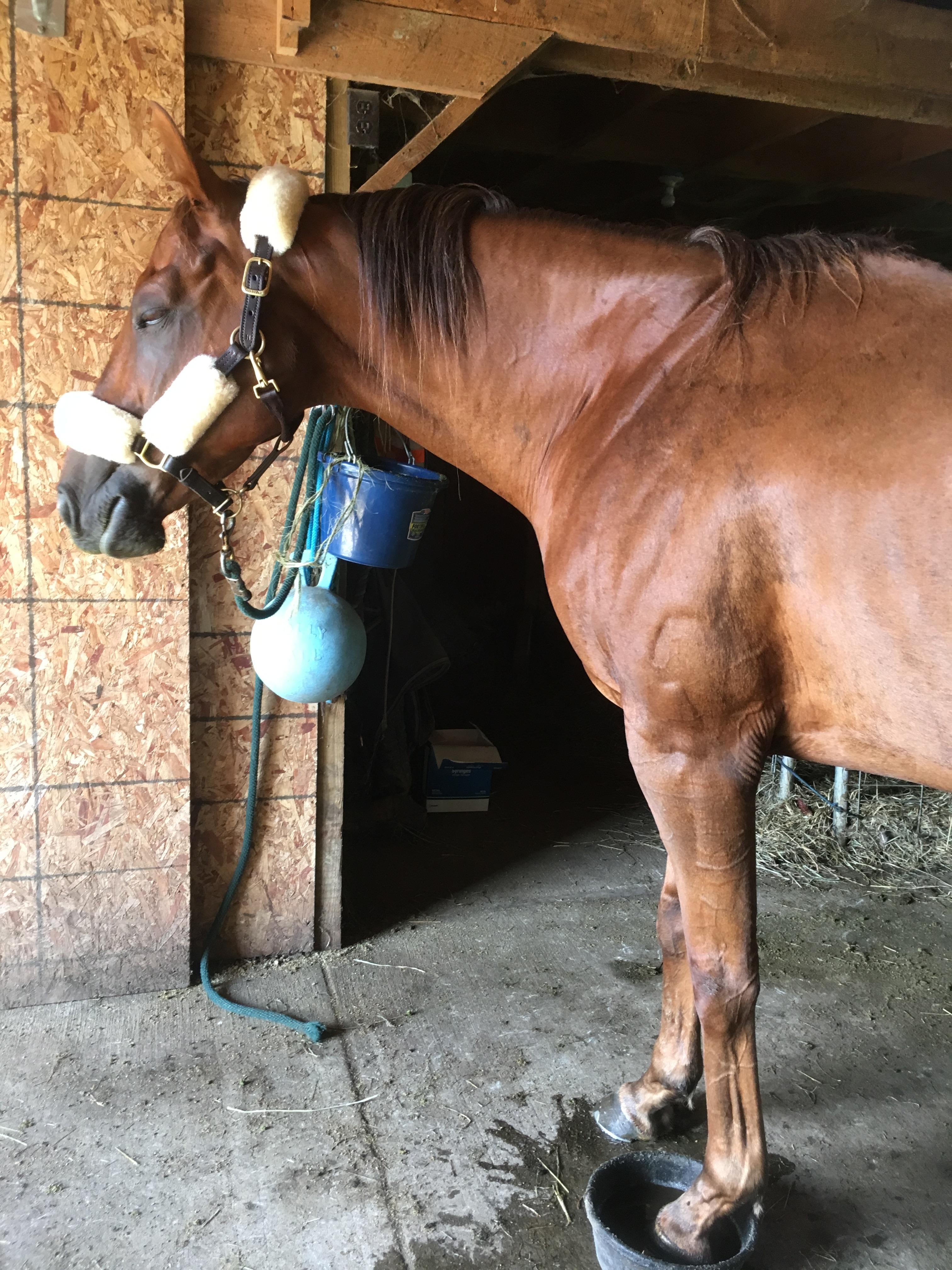 Jobber, finding this hoof soaking thing to be a total snooze. Photo by Kristen Kovatch.

It’s been a fairly quiet summer down on the farm (surprisingly). Knock on some wood for me, but most of the livestock has stayed where it’s supposed to, barring a memorable mad dash across the place last weekend when Grandpa Allen called us from the hayfield while we were unloading wagons to let us know the cows were moseying towards the open gates.

Life goes on at the farm — cutting hay, picking corn, rotating pastures and most recently, treating abscesses. No matter if you’re at the swankiest equestrian center in the country or the dusty family farm with horses nodding out in the pasture, abscesses are a fact of life for all horse owners, and I was not exempt this year with my horse Jobber currently out of commission (but improving ever day). And as if that wasn’t enough to deal with, also down for the count is our bull, Bon Jovi.

We noticed Bon Jovi spending a little more time off his feet than on them earlier in the summer, and when you’re a breeding bull who has literally one job to do that involves being on your feet, that’s a big problem. Closer inspection revealed some swelling and lameness in the left hind, so we rounded him up, brought him down to the barn, treated him with some strong antibiotics under supervision of a vet and then leased him out to a friend with a far smaller herd and pasture (and picked up Bon Jovi’s replacement Shrek. I promise I’m not the one naming these guys).

Unfortunately, the original minor injury, despite early and prompt treatment, only temporarily improved before abscessing, so home again came Bon Jovi for more intensive treatment. In our wrestlings with Bon Jovi in the past week, a few truths came to mind about the significant differences between doctoring one species versus another.

(Disclaimer: I am sure that on many farms around the country, there are compliant, halter-broke bulls that you can doctor just like a horse, standing tied while you monkey around with his foot. Bon Jovi, while a very sweet and tractable bull, is not one of these, especially when his foot really, really hurts.)

Horse: Halter him and lead him to the grooming area, where you tie him up. Remove yesterday’s hoof pack.
Bull: Set all the gates from his holding pen to the squeeze chute, then gently herd him into the chute system. Capture him in the head gate. Remove yesterday’s pack.

Horse: Pick up hoof and examine for signs of additional drainage, reminding horse to “whoa” as you gently probe the site, noting his flinching or reaction.
Bull: Tag-team picking up the hoof in question, try not to get kicked in the face when he objects to you coming within six inches of the drainage site.

Horse: Line up your packing supplies, raise hoof from the water, apply poultice pad, diaper, vet-wrap and duct tape, lower hoof, step back and admire your handiwork.
Bull: Line up your packing supplies, have your assistant ready with a soft cotton rope to tie the bull’s foot up so you can apply your packing, because no matter how much you’ve sanitized the chute from the previous day’s activities he’s still managed to poop everywhere as soon as he got there today and you’re trying really, really hard to keep these abscess site clean. Figure out how to wrap vet-wrap around one individual claw on a cloven hoof, get it “good enough” and release the rope while keeping your phalanges clear of any pinch points.

Horse: Feed horse a cookie and tell him you love him as you return him to his stall
Bull: Open the head gate and gently prod bull back into his holding pen with promises that if he gets better soon he will have more girlfriends, which is a total lie because breeding season is over and he missed his chance. Sorry, dude.

I never thought I’d say this, but the process of treating an equine abscess is a walk in the park. All it needed was a little perspective.