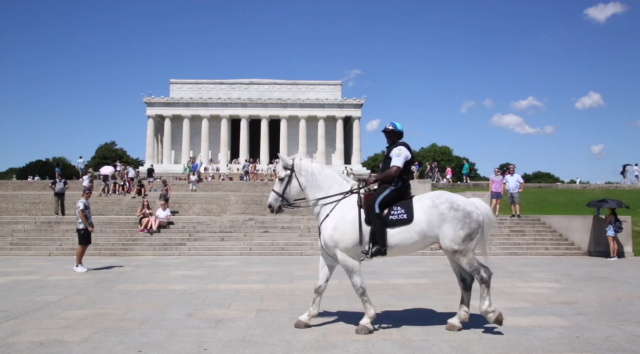 Meet Officer Chester West and his Percheron cross Delilah, members of the US Park Police mounted patrol hard at work in Washington, D.C.!

Mounted police have one of the most unique horse jobs on the planet: not only do they serve as law enforcement AND equestrian ambassadors to the general public, but they and their horses also serve an important role in crowd control and traffic management.

The US Park Police is one of the oldest mounted units in the country, located in Washington, D.C. — mounted officers and horses here interact with millions of visitors from all over the country and the world, plus carry out the duties of law enforcement on a daily basis along with special events (including demonstrations and major political events such as the inauguration).

It’s an intense job, but it’s also extraordinarily rewarding. Follow along with mounted office Chester West and his lovely Percheron/Thoroughbred mare Delilah for a day’s work:

Every summer, millions of visitors flock to the monuments and memorials on the National Mall in Washington D.C. One of the country’s oldest police equestrian units, the U.S. Park Police mounted officers are responsible for keeping the nation's Capital and its visitors safe. From Presidential Inaugurations to political demonstrations, mounted officers help provide crowd control, traffic management and are goodwill ambassadors to the public. We spent a day with Officer Chester West and his horse Delilah. This is their story.

Posted by U.S. Department of the Interior on Wednesday, August 22, 2018

Officer West takes his job very seriously, but his love for his equine partner Delilah is evident as well. We salute this team which works hard to keep us safe in the nation’s capitol!